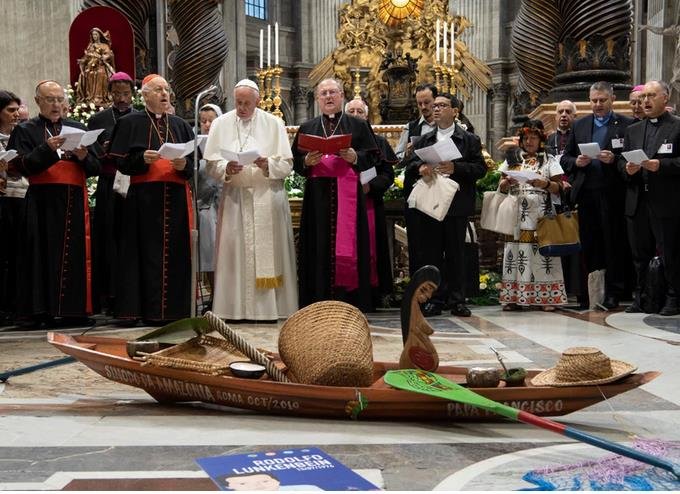 However, when pressed, the officials denied the image represented the Virgin Mary, as had been previously claimed by Vatican News and other unofficial sources, and suggested rather that the image “banally or fundamentally represents life.”

Presumably implying the symbol is intended as an abstraction rather than a devotional item (Christian or pagan), Paolo Ruffini, Prefect of the Vatican Dicastery Communications, emphasized that this interpretation was his own personal opinion and said he would undertake to check with synod organizers.

As LifeSite pointed out at Wednesday’s synod briefing, at least one indigenous leader has identified the original ceremony involving the statue as “pagan,” and last week a Dominican panelist conceded at the Holy See Press Office that the statue is open to interpretation, as either the Virgin Mary or Mother Earth.

LifeSite asked for clarification from either the Vatican or REPAM (synod organizers) as to whether this image is Christian or pagan in origin and meaning.

Paolo Ruffini said he would investigate the question but cautioned against “looking for pagan symbols” and “seeing evil where there is none.”

LifeSite also pointed out that the true nature of the image is central to the question of what precisely occurred in the recent ceremony held in the Vatican gardens, about which many so many Catholics are concerned given that St. Peter’s Basilica is thought of as their mother Church by many baptized Catholics.

The video of the event shows the Pope presiding over a ceremony involving the planting of a tree, with indigenous persons, Europeans and a Franciscan friar kneeling with heads to the ground in a circle around the mysterious female figure.

At today’s press briefing, the tree was described as “sacred” by Ruffini, who also serves as president of the Amazon Synod information commission.

It is unclear why Ruffini’s claim that the image is an abstraction would establish that it is not pagan. Many pagan ‘deities’ are, of course, abstractions, such as Flora (the goddess of flowers), Cronos (the god of time) and Eros (the god of love). Nevertheless, Fr. Giacomo Costa, SJ, secretary for the synod information commission, said the mysterious figure should not be seen as “either pagan or sacred.”

One of the bishops on today’s panel denied having seen the image at all, even though it has been placed prominently in front of the dais in the Synod Hall where bishops are seated, as can be seen in the image below.

Here below is LifeSite’s question at today’s press briefing and the video of the exchange:

LifeSite: “In recent days, during various ceremonies in the Vatican, even in St. Peter’s Basilica and in the Synod Hall, a wooden statue of an unclothed pregnant female figure has been seen. Last week, here in the press room, we heard from a Dominican that he doesn’t not know what it is, but that everyone can have their interpretation: either the Virgin Mary or Mother Earth. Is there an authoritative text by the artist or by the REPAM so that the question can be resolved?