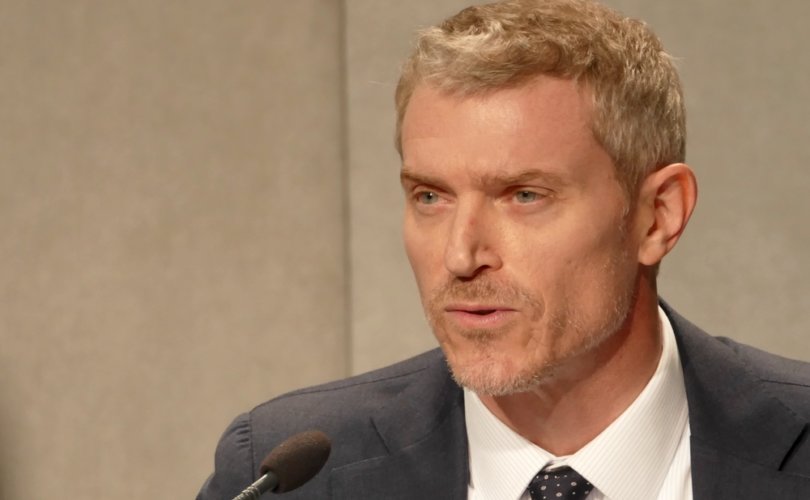 ROME, February 13, 2020 (LifeSiteNews) — Questions regarding the magisterial weight of the Amazon Synod’s final document, which called for married priests and “new” ministries for women in the region, took center stage at the February 12 Vatican press conference on Pope Francis’s summary document on the synod, Querida Amazonia [Beloved Amazon].

The synod’s final document, which received a two-thirds majority from bishops at the conclusion of the October 6-27 Vatican assembly, proposed ordaining married men to the priesthood in order to make the Eucharist more widely available to Catholics in the Amazon region (n. 111).

At the presser, a chorus of often discordant voices united in expressing their common confusion over Pope Francis’s introduction to Querida Amazonia, in which he states his intention to “officially present the [synod’s] final document,” encourage “everyone to read it,” and “strive to apply it” according to their vocation in the Church.

Was the Pope officially approving the synod’s final document and its proposal for married priests, even though he was silent about celibacy and “viri probati” [i.e. men of proven virtue proposed for ordination] in his apostolic exhortation? And if so, was he giving bishops’ conferences — particular that in Germany — the go ahead to decide on married priests at the local level?

In prepared remarks, panelist Cardinal Michael Czerny, who served as special secretary for the Amazon Synod, discussed the “status of the two documents” and where they “fit into the magisterium.”

Regarding the final document, he said that “apart from formal magisterial authority,” the Pope’s “official presentation and encouragement” confer on it “a certain moral authority.”

“To ignore [the final document] would be a lack of obedience to the Holy Father’s legitimate authority, while to find one or other point difficult could not be considered a lack of faith,” Czerny said.

The Czechoslovakian-born Canadian Jesuit, whom Pope Francis made a cardinal in 2019, added that the final document, “consisting of proposals made and voted by the Synod Fathers, has the weight of a synodal final document.” Querida Amazonia, “reflecting on the whole process and its final document, has the authority of ordinary magisterium of the Successor of Peter.”

Veteran Italian journalist Sandro Magister summed up the problem, saying: “In the exhortation there’s not a word regarding the priestly ordination of married men. But in the synod’s final document there is […] Does this mean a bishops’ conference can take the final document as a springboard to decide on matters concerning the priestly ordination of married men?”

Cardinal Czerny said he didn’t recall saying the final document is included in the papal magisterium but that the various and particular proposals “remain on the table” and that the Pope “encourages the Church in the Amazon and the Church everywhere” to “apply [them] in proportion to the reality in which they find themselves.”

Seeking to clear up the confusion, Vatican spokesman Matteo Bruni said: “The apostolic exhortation [Querida Amazonia] is magisterium. The final document is not magisterium.”

Bruni said the Amazon synod’s treatment of celibacy and the permanent diaconate “was meant to respond to the pastoral need: evangelization” and that “the Pope’s position on celibacy” has been reported in the media.

Still not satisfied, another journalist asked how one is to understand the final document in light of Pope Francis’s 2018 apostolic constitution Episcopalis Communio, n. 18, which states: “If it is expressly approved by the Roman Pontiff, the final document participates in the ordinary Magisterium of the Successor of Peter.”

Cardinal Lorenzo Baldisseri, Secretary General of the Synod of Bishops, clarified that Querida Amazonia “does not talk about approval of the final document” but about “presentation” and is therefore “not magisterial.”

New York Times reporter Jason Horowitz pressed further, asking if the “issue of married priests” can be implemented by bishops’ conferences “without the Pope’s approval.” Bishops conferences “can’t just decide to do that,” he said, suggesting that Querida Amazonia therefore seems like a “rejection” of married priests.

Matteo Bruni reiterated that “the synod was on evangelization” and that, while “proposals were made, not all of them were picked up in the apostolic exhortation.”

The final document is “precious” and derives its authority “from the synod of bishops,” he said, but it “does not become magisterium” through the Pope’s presentation of it in Querida Amazonia.

The Vatican spokesman insisted that “anything in the final document should be read through the lens of the apostolic exhortation.”

“Even the application or implementation should be done in light of the exhortation itself … Is it clear?” he asked.

Apparently not to all, as NBC then pressed Cardinals Baldisseri and Czerny for “a little clarity.”

“Does this mean that the Pope has closed the door on the issue of married priests and women deacons?” NBC’s correspondent asked.

Cardinal Czerny implied that clarity was not the object of the exercise, explaining:

I think the best way to understand this is as part of a process and part of a journey. That’s why it’s called the synod. We are at a very important point of the synodal process, and there are long roads ahead as well as roads already travelled. And so, the questions you are returning to are questions on the road, and the Holy Father has not resolved them in any way beyond what he has said in the exhortation. So, if there are questions you feel are open, or that the Church feels are open, thanks to the exhortation, they will continue to be debated, discussed, discerned, prayed over and when mature, presented to the appropriate authority for decision. There are decisions that can be made in a diocese, in a [bishops’] conference. And there are decisions that are made here [in Rome]. So, I think if you’re looking for a kind of closure so that you can end your article with a punch, I’m afraid there isn’t that kind of closure.

After the press conference, LifeSite spoke with Sr. Bernadette Riess, English coordinator for Vatican News, about the magisterial weight of the synod’s final document.

“The final document does not have ordinary magisterial authority unless it is ratified and promulgated by Pope Francis and that’s a direct quote from number 18 of Episcopalis Communio. This particular final document did not receive such ratification and promulgation. We need to be very clear about that,” she said.

Sr. Bernadette continued: “What we also have to remember is that all synod’s have a final document. In this case, the synod’s final document was published and in this particular apostolic exhortation the Holy Father is presenting it and wants it to be read, but he also wants people to strive to implement it.”

Pressed on what she meant by implementing the final document, Sr. Bernadette mentioned a number of non-controversial measures proposed in the document and observed that not all of them were directly referenced in the Pope’s apostolic exhortation, suggesting that Pope Francis “wants this document to remain alive.”

When it was suggested to Sr. Bernadette that there is a significant difference between the creation of a university or a communication network and the ordination of sexually active married men, she conceded that such a decision would have to be approved by the Pope.

“I think Pope Francis has been very clear, even in this document, that in his mind more ordained ministries are not what the Church needs. He’s made that very clear and he’s consistent in saying that, because he sees that one element that needs to be corrected first is the link between authority and priesthood (while maintaining a hierarchical Church). He comes out directly saying that,” she said.

While stressing Pope Francis’ observation that women represent the Marian aspect of the Church, and that the fixation on female ordination may express clericalist presuppositions, Sr. Bernadette was unwilling to concede that a woman is simply not the proper matter for the Sacrament of orders (just as orange juice cannot be used for baptism). She was of the view that the issue of women being ordained to the diaconate was still up for discussion.

Pope Francis has decided not to make a universal law allowing for the priestly ordination of married men in Querida Amazonia, but given his emphasis on the synod’s final document, will he allow local synods to decide in the future? The “journey” continues.