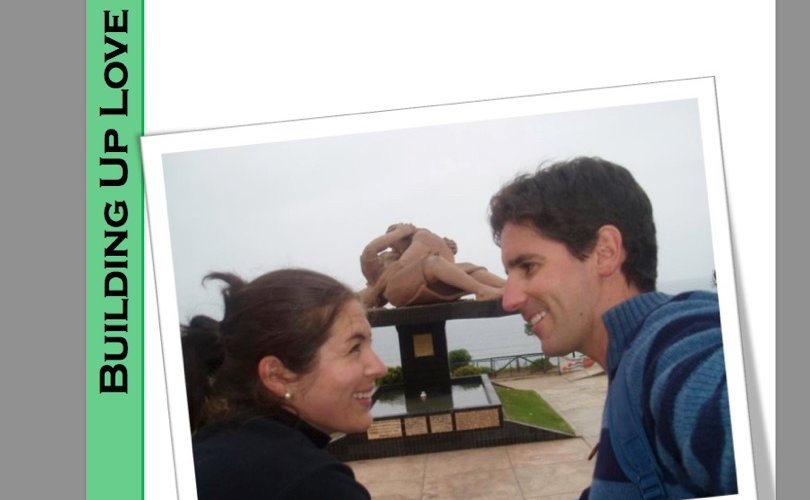 A young couple poses in front of a statue of two people engaging in sexual activity. Source: Vatican sex-ed program

“I find it monstrous that an official arm of the Church would not only create a sexual education program for teens but one that bypasses parents as the primary educator of their children,” said Dr. Thomas Ward, Founder and President of the National Association of Catholic Families as well as a Corresponding Member of the Pontifical Academy for Life.

The program, titled “The Meeting Point: Course of Affective Sexual Education for Young People,” was released last week by the Pontifical Council for the Family to be presented this week to young people at World Youth Day in Poland.

Read LifeSiteNews’ analysis and breakdown of the program here.

While the program has been in the process of development by married couples in Spain for a number of years, it received impetus to be completed by Pope Francis’ April apostolic exhortation on marriage and the family, Amoris Laetitia. In the exhortation, the Pope speaks about the “need for sex education” to be addressed by “educational institutions,” a move that alarmed global life-and-family leaders since the Catholic Church has always recognized and taught — often in the face of opposition from world powers — that sex education is the “basic right and duty of parents.”

Ward called it “disingenuous” for anyone to think that the program will not be used as an excuse by various powers and authorities to “ignore and even dismiss the concerns of objecting parents who are trying to protect their children.”

“It could be the purest program in the world, but the fact that this is happening while pushing parents aside opens a Pandora's box to sex education of all sorts. By pushing parents aside the creators of the program have effectively removed the safeguard that has been put in place by God to protect children from corrupting influences,” he told LifeSiteNews.

The curriculum has been primarily created to be used in a classroom setting by educators.

Archbishop Vincenzo Paglia, the pontifical council's president, stated in a presentation on the sex-ed program that the “uniqueness of the project” consists in that it “combines attention to teachers and to the young person or adolescent.”

Monsignor Carlos Simon Vazquez, the council's undersecretary, went even further in his introduction to the program, calling its emphasis on aiding the “educator or the teacher” an “outstanding development.”

“In fact, an entire inner pedagogical articulation is impregnated by the teacher-pupil dialogue, presented as one of the assets of this project that can be implemented at different stages of the life of the young,” he wrote.

The monsignor pays lip service to the role of parents, stating that the course can also be used by families, making homes “enriched” by this project.

In the 518 pages of the program, parental involvement happens on one occasion, namely, when students are told to “ask your parents and grandparents to show you photographs of when they were children and young adults, and look at the changes together. It can be a really nice experience.”

Classroom teachers, however, are tasked with — more than 40 times — explaining, describing, discussing, supervising, moderating debate, and reviewing materials with the students.

At one point, the manual instructs teachers to elicit from students answers to questions that would be similar to the advice that parents would give their children when speaking about chastity. “Here is where we try to get [the students] to say the same things that their parents would say themselves: be careful in your relationship, value your body, avoid temptation and you will evade danger,” the program states.

At another place, the manual instructs teachers to bring into the classroom a “biology teacher” who can help the youths identify “primary and secondary sex characteristics, observing the difference between male and female.”

Ward called the program “thoroughly immoral,” adding that it amounted to a “complete rupture from the teaching of the Church throughout the ages about the parent as primary educator.”

“Parents are the primary educators of their children, especially when it comes to passing on sexual morals and values. They, and they alone, know when their child is ready for such information,” he said, adding that the “right information at the wrong time could cause catastrophic damage to a child.”

“I say that if this program has handed the sexual formation of young people over to the so-called experts and has not involved parents in any meaningful way, then it has usurped their duty and rights over their children. Once the parents are removed, who will protect the children?”

“Parents are the primary educators of their children, especially when it comes to passing on sexual morals and values. They, and they alone, know when their child is ready for such information.”

In 1937 Pope Pius XI wrote the encyclical Mit Brennender Sorge in which he denounced the National Socialist government in Germany. He urged Catholic parents, whose parental rights were being undermined by Nazi policy, to not give up their moral duty to instruct their children.

“Parents…have a primary right to the education of the children God has given them in the spirit of their Faith, and according to its prescriptions. Laws and measures which in school [situations] fail to respect this freedom of the parents go against natural law and are immoral,” the pope wrote.

The pope at that time warned parents of the consequences of relinquishing their God-given duty.

“Yet do not forget this: none can free you from the responsibility God has placed on you over your children. None of your oppressors, who pretend to relieve you of your duties can answer for you to the eternal Judge, when he will ask: ‘Where are those I confided to you?’ May every one of you be able to answer: ‘Of them whom thou hast given me, I have not lost any one.’”

Reflecting on the above passage, Dr. Ward commented that not even a Pontifical Council can relieve parents of their duty as primary educator of their children in sexual matters or answer for them on their behalf when parents face the “eternal Judge.”

John Smeaton, Chief Executive of the Society for the Protection of Unborn Children and co-founder of Voice of the Family, told LifeSiteNews that the Vatican program threatens children.

“In the Apostolic Exhortation Amoris Laetitia Pope Francis included a section titled the ‘need for sex education.’ Pro-life and pro-family leaders warned at the time that the wording of the pope’s appeal, and his failure to uphold the rights of parents in this section, risked playing into the hands of powerful international agencies that were pushing damaging sex education programmes. Now, three months later, we see the pope’s own Pontifical Council for the Family releasing a programme filled with problems.”

Smeaton shared Ward’s concern that the program has violated the right of Catholic parents over the education of their children.

“By encouraging teachers and other educators to expose children to such a programme the Vatican is violating the rights of Catholic parents to be the primary educators of their children in sexual matters. It is entirely inappropriate for children to be exposed to explicit sexual imagery, such as that contained in this course, and to be encouraged to discuss sexual matters in a classroom environment.”

Smeaton said that parents should not underestimate the program’s threat to children.

“Parents must not be under any illusion: the pontificate of Pope Francis marks the surrender of the Vatican authorities to the worldwide sexual revolution and directly threatens their own children,” he said.

“Parents must not be under any illusion: the pontificate of Pope Francis marks the surrender of the Vatican authorities to the worldwide sexual revolution and directly threatens their own children.”

Christine Vollmer, a founding member of the Vatican’s Pontifical Academy for Life as well as the founder of the Latin American Alliance for Life, called it “problematic” that the program bypasses parents.

“It is quite tragic that the Pontifical Council for the Family should by-pass the parents when this has been the problem that has brought on the adolescent sex problems that we are suffering,” she told LifeSiteNews.

She noted that while the program has used some good philosophical bases it has also “fallen into the trap of thinking that using material of a rather crude and ‘sexy’ variety will awaken the interest of adolescents.”

“Sadly, these will have either the effect of arousal or of turning off the kids, and many parents will feel disappointed or even betrayed by this surprising error in the program,” she added.

Public sex education for youths has been decried by a number of renowned Catholic thinkers over the decades.

Famed Catholic thinker Dietrich von Hildebrand, called by John Paul II “one of the great ethicists of the twentieth century” and by Pope Benedict XVI one of the “most prominent” figures in the intellectual history of the Church in the last century, held that any form of classroom sex education damaged children.

“The nature of sex, itself, must first be grasped if we are to estimate the damage done to the souls of children by the so-called sex education in the classroom — damage not only from the moral point of view, but also from the one of human integrity and spiritual health,” he wrote in an essay published in 1969, eight years before his death.

Protecting the “holy bashfulness” of young people while passing on the “moral significance” and “mysterious character” of sex can only be done by parents, he writes.

“To develop the right attitude and vision in the human person toward this sphere of sex, there exists only one possibility; namely, information about the mystery of sex must be disclosed in great reverence and in a strict duo-personal dialogue, of the father or the mother with their child. Absolutely excluded is the pseudo-scientific teaching about sex in a classroom — that is, in a neutralizing and publicity-saturated atmosphere,” he wrote.

Parents are “responsible for sex education in the true sense of education,” he wrote, adding that they “must protect the child from all neutralizing discussions of this field.”

The Catholic thinker ended his essay quoting the words of Jesus found in the Gospel of Matthew: “But he that shall scandalize one of these little ones that believe in Me, it were better for him that a millstone should be hanged about his neck, and that he should be drowned in the depth of the sea.”

Editor's Note: The Pontifical Council for the Family is asking for feedback about its program. Please be respectful in communications.

The PCF may be contacted using its online platform here (scroll to bottom of page) or by using the information below: