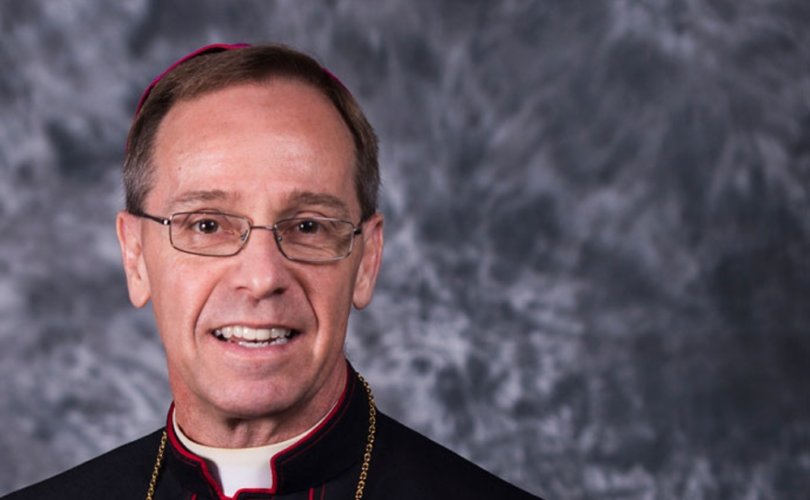 Sept. 24, 2019, 2:05 PM EST update: The Vatican responded to LifeSiteNews' request for comment. This comment is now included in this report.

INDIANAPOLIS, Indiana, September 24, 2019 (LifeSiteNews) — A Vatican Congregation has temporarily suspended a U.S. archbishop’s decision to revoke the Catholic identity of a Jesuit-run high school for its refusal to release a teacher in a same-sex “marriage.”

In June, Archbishop Charles C. Thompson decreed that his Indianapolis archdiocese was cutting official ties with Brebeuf Jesuit Preparatory School after administrators refused to fire Layton Payne-Elliott, a Catholic male educator who is in a same-sex “marriage” to another teacher, Joshua Payne-Elliott. The latter was fired by Indianapolis Cathedral High School and is now suing the archdiocese despite having reached a settlement.

The action by the Congregation for Catholic Education in Rome was the result of an appeal by the school, working in conjunction with Brian Paulson, S.J., Provincial of the USA Midwest Province of the Society of Jesus, to rescind and permanently set aside the Archbishop’s decision. Cardinal Giuseppe Versaldi, the prefect of the Congregation, was appointed to the post by Pope Francis in 2015.

While Archbishop Thompson had granted the school permission to carry on with daily Masses, a ban on special Masses had remained in effect.

“We have just learned that the Congregation for Catholic Education has decided to suspend the Archbishop's decree on an interim basis, pending its final resolution of our appeal,” wrote school President Fr. Bill Verbryke, SJ, in a letter to the school community.

“The Archbishop very kindly informed me that, as a result of this temporary suspension of his decree, Brebeuf is free to resume our normal sacramental celebrations of the Eucharist. Most happily, this means that we will be able to celebrate the Mass for the Feast Day of St. Jean de Brebeuf on October 24.”

“It is very important to understand, however, what this temporary suspension of the Archbishop’s decree does NOT mean,” continued Verbryke. “It does not mean that the matter has been resolved, or that any permanent decision has been made. It also does not mean that anyone should infer that the Congregation for Catholic Education is leaning one way or the other on any of the issues at hand.  The Congregation has simply granted a temporary suspension of the Archbishop’s decree until it makes a final decision.”

According to Verbryke, it is unknown how long the appeal process will take.

“I want to stress that this process is ongoing in an environment of not only deep love for our Church, but also, despite our differences on this matter, deep respect for the Archbishop,” said Verbryke.

“Ultimately, our desire is to remain in full communion with the Catholic Church, without restrictions on our celebration of the Eucharist, and that our identity as a Catholic school be fully recognized and supported by the Archdiocese, as had been the case for our first 57 years,” he added.

The Catholic Church teaches that homosexual practices are “acts of grave depravity” and for this reason, “tradition has always declared” such acts to be “intrinsically disordered.” The Church further states that “under no circumstances can they be approved.”

According to the Code of Canon Law, the archbishop has a responsibility to ensure that religion teachers are “outstanding in true doctrine, in the witness of their Christian life, and in their teaching ability.” It also recognizes that he may approve religion teachers and “if religious or moral considerations require it, the right to remove them or to demand that they be removed.”

The Archdiocese responded with a statement confirming the action by the Vatican office:

Following standard canon-law procedures, the Congregation for Catholic Education in Rome has temporarily suspended the effects of a decree by the Archdiocese derecognizing Brebeuf Jesuit Preparatory School as a Catholic institution. This is a common, temporary measure that does not affect a final determination. The Archdiocese of Indianapolis awaits a final determination by the Congregation for Catholic Education.

The Vatican press office referred questions to the Archdiocese.

“You may want to refer to the Archbishop of Indianapolis for information in this regard, since he was the addressee of the letter sent by the Congregation for Catholic Education,” stated Matteo Bruni, director of the Holy See Press Office, to LifeSiteNews.

Despite the diplomatic statements from both sides, fundamental, irreconcilable differences remain between the Jesuit school and the Archdiocese.

When Archbishop Thompson issued his decree in June, he stated categorically that Brebeuf Jesuit Preparatory School had made a choice “to no longer retain Catholic identity according to the doctrine and pastoral practice of the Catholic Church and, therefore, to no longer remain as a Catholic institution in the Archdiocese of Indianapolis.”

Speaking on behalf of the school at the time, Jesuit Provincial Brian Paulson took a stance at odds with the Archdiocesan decree, saying, “Brebeuf’s administration and Board of Trustees have determined that following the Archdiocese’s directive would not only violate their informed conscience on this particular matter, but also would set a concerning precedent for future interference in the school’s operations and other matters that have historically been the right and privilege of Brebeuf Jesuit officials.”

“This is an issue that cuts to the very heart of what it means to be a Jesuit institution with responsibilities to both the local and universal church, as well as for the pastoral care we extend to all members of our Catholic community,” he added.

A petition launched by LifeSiteNews in support of the Archbishop's decision has received over 6,000 signatures.