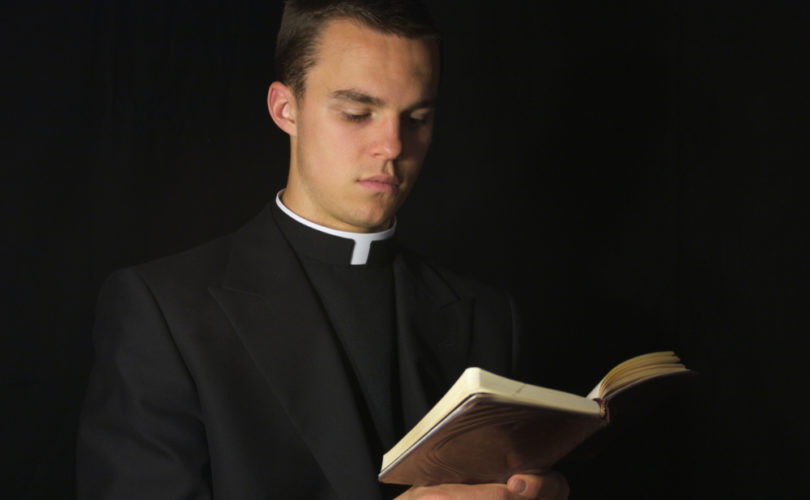 VATICAN CITY, April 12, 2021 (LifeSiteNews) –– The Vatican today announced a three-day symposium entitled “for a fundamental theology of the priesthood,” due to be held next February. The event looks to examine the relation between the ordained priesthood and the priesthood of the faithful, and will potentially undermine traditional teaching regarding the sacrament of holy orders: Cardinal Marc Ouellet refused to rule out the discussion of female deacons or priestly celibacy at the symposium.

Announcing the symposium, Cardinal Ouellet, prefect of the Congregation for Bishops, declared that the conference would further Pope Francis’s desire for “synodality,” building on themes proposed by the Second Vatican Council, and revealing that topics such as female deacons and clerical celibacy would also be discussed.

The symposium, which began its organizational process a year ago, will be held February 17 through February 19, 2022.

Intended particularly for bishops, but also priests, seminarians and those forming men in the seminary, Ouellet stated that it would “deepen our understanding of vocations and the importance of communion between the different vocations in the Church.”

Fr. Vincent Siret, rector of the Pontifical French Seminary in Rome and Professor Michelina Tenace, professor of theology at the Pontifical Gregorian University, both joined the cardinal in the press conference. All three stated that the upcoming symposium did not intend to “offer practical solutions to all the pastoral and missionary problems of the Church,” but rather to understand and re-examine the vocation of the priesthood, with Tenace saying it would offer a new reflection and understanding of the priesthood.

Structure of the symposium

The three days of the symposium will be devoted to different themes, with “Tradition and New Horizons” on the first day, “Trinity, Mission, and Sacramentality” on the second, and “Celibacy, Charism, and Spirituality” on the third.

Demonstrating the importance which the Vatican is seemingly attributing to the symposium, each half day will be chaired by a different cardinal, with prefects from the Congregation of the Clergy, the Congregation for Divine Worship and the Discipline of the Sacraments, and the Dicastery for Laity, Family and Life among the prelates. Cardinal Ouellet and Cardinal Tagle, a known favorite of the Pope’s who has lamented the Church’s “harsh” and “severe” stance towards homosexuals, will also be present.

In light of the lack of priestly vocations, Ouellet noted that a key focus of the symposium would be the relation between the laity and the ordained clergy.

Describing the link between Christ’s priesthood and the Church’s participation in this, as a “crucial question for our time,” Ouellet commented that it could only be understood by examining the “fundamental relationship between the priesthood of the baptized, which the Second Vatican Council has enhanced, and the priesthood of ministers, bishops and priests, which the Catholic Church has always affirmed and specified.”

This “rapport,” would require “pastoral readjustments,” involving “ecumenical questions not to be ignored, as well as the cultural movements that question the place of women in the Church,” explained the 75-year-old.

He referenced the widespread dearth of vocations, local “tensions” stemming from “divergent pastoral visions,” as well as “multiculturalism and migrations,” and “ideologies that condition the witness of the baptized and the exercise of the priestly ministry in secularized societies.”

“In this context, how can we live a missionary conversion of all the baptized without a new awareness of the gift of the Holy Spirit to the Church and to the world through the Risen Christ?”

This was also alluded to by Fr. Viret, who declared that “it does not suffice to repeat” previous teaching on the priesthood and the communion of the whole Church, but called for this reflection to be repeated “without ceasing” and always in a renewed manner.

The symposium is being proposed as an answer to “clericalism,” a term often employed by Pope Francis, and one which he has directly linked to “rigidity,” the term by which he attacks traditional clergy, particularly those who offer the ancient liturgical rites of the Church and dress in traditional attire, such as the cassock.

Echoing Cardinal Ouellet, Fr. Viret declared that the symposium is “in the path of synodality. This way is in fact the only way to escape ecclesial clericalism.”

Outlining the particular themes to be dealt with in the symposium, Tenace revealed it would examine the relation between the “ministerial priesthood and the common priesthood” of the faithful, and “deepen the theology of the priesthood,” thus reaffirming the “essential traits of Catholic tradition of the identity of the priest, and maybe freeing it from a certain clericalization.”

— Article continues below Petition —
PETITION: Call for Vatican to rescind restrictions on private and traditional rite Masses at St. Peter's
Show Petition Text
19381 have signed the petition.
Let's get to 20000!
Thank you for signing this petition!
Add your signature:
Show Petition Text

In questions following the three statements, Cardinal Ouellet refused to rule out the discussion of female deacons or priestly celibacy at the symposium.

Suspicions that these topics would be part of the symposium were further evidenced by Tenace herself, who stated that the “question of celibacy must be addressed.”

“The question raised is that the priestly function does not require celibacy,” she said, noting, however, that it is required in the “Latin tradition.”

The symposium’s program also reveals that a round table discussion is indeed planned to address “women and ministry,” while another session is dedicated to looking at priesthood and celibacy in the Church today.

In addition, Tenace alluded to possible changes to “sacramental theology and the liturgy,” saying that they were areas that must be “re-proposed” at the conference.

She called for a movement of the Church with the current times, stating that “each age elaborates an updated ecclesiology.”

Possible effect of the symposium

Tenace mentioned the image of the priest as the ordained minister who leads the parish and administers the sacraments, as being “a very limiting vision,” suggesting that “there is urgency” for the symposium to correct this view, “because the entire community must be considered.”

Tenace’s insistence on a new understanding of the priesthood in reference to the community, appears to align closely with an error condemned by Pope Pius XII in his encyclical Mediator Dei (1947), who warned of the false nature of the following position: “they assert that the people are possessed of a true priestly power, while the priest acts only in virtue of an office committed to him by the community.”

In his Mass and the Sacraments, the 20th century theologian Fr. John Laux warned of the dangers that are inherent in the widespread and un-clarified promotion of the priesthood of the faithful, since it was this which Martin Luther used to rebel against the ecclesial authorities.

Laux also noted that while there is a universal priesthood of the faithful, it is not the only form of priesthood since there is the greater form of sacrifice and priesthood instituted by Christ, the Mass and the ordained descendants of the apostles:

“All the faithful are indeed ‘an elect race, a royal priesthood,’ but they are not the representatives of Christ at the altar, they do not, in the Mass, change the bread and wine into the Body and Blood of Christ, they are not the ‘dispensers of the mysteries of God,’ not to them did Christ say: ‘Do this in remembrance of Me.’”