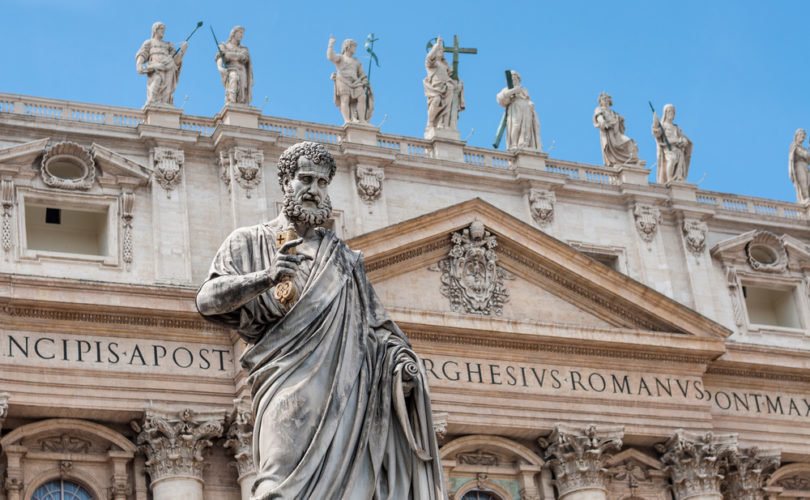 ROME, September 19, 2019 (LifeSiteNews) — Following a public denunciation by Archbishop Carlo Maria Viganò and years of pressure from the Italian media and from the government of the city of Rome, the Vatican announced this week that its Promoter of Justice is seeking a criminal trial for a priest accused of having molested the pope’s altar boys at the Pius X pre-seminary, which exists within the Vatican’s walls.

According to the Holy See, the prosecution of Fr. Gabriele Martinelli, who was a seminarian at the time of the alleged crimes, is being sought, as well as that of Fr. Enrico Radice, Rector of the Pre-seminary during the same period, “on charges of aiding and abetting.”

Archbishop Viganò accused high officials in the Holy See of a cover-up of the alleged sexual abuse earlier this year, in material he originally submitted to the Washington Post but which was instead published by LifeSite on July 3. Viganò expressed concern about Pope Francis’ own possible complicity in the cover-up, along with his subordinates Cardinal Francesco Coccopalmerio and Cardinal Angelo Comastri, Vicar General of Pope Francis for Vatican City.

The Holy See’s press release states that an investigation was opened regarding the alleged abuse in November 2017 “following reports in the press.” It explained that while the case dates back to a time when the law required the injured party to file a complaint within one year, Pope Francis overrode the statute of limitations through a “special provision” on July 29, 2019.

The Pope’s decision in July to allow the prosecution came less than one month after LifeSite’s publication of Archbishop Carlo Maria Viganò’s cover-up accusations, and after years of detailed reporting on the case in the Italian media. As a result of the reporting, Rome’s chief prosecutor opened his own investigation of the case in mid-2018, and planned to submit the evidence gathered to the Vatican’s authorities to facilitate any prosecution that might be warranted.

According to reports in the Italian media, the Roman Prosecutor was preparing to request a prosecution of Martinelli in August of this year. It is not clear if the evidence gathered by the prosecutor contributed to Francis’ decision to permit the prosecution.

Pope and cardinals knew of testimony for years, according to Archbishop Viganò

“The signs I see are truly ominous. Not only is Pope Francis doing close to nothing to punish those who have committed abuse, he is doing absolutely nothing to expose and bring to justice those who have, for decades, facilitated and covered up the abusers,” Archbishop Viganò wrote in July.

“The pope and many prelates in the Curia are well aware of these allegations, but in neither case was an open and thorough investigation permitted. An objective observer cannot help but suspect that horrible deeds are being covered up,” stated Viganò, who also asked, “How can one interpret Pope Francis’ firm decision not to talk about or answer any question about this matter except as a cover up of the facts and protection of a homosexual network?  Such decisions reveal a terrible truth: rather than allowing open and serious investigations of those accused of grave offenses against the Church, the pope is allowing the Church herself to suffer.”

According to Archbishop Viganò’s testimony, one of the pre-seminarians “claims to have witnessed dozens of incidents of sexual aggression.”

“Along with two other seminarians, he denounced the aggressor, first in person to his pre-seminary superiors, then in writing to cardinals, and finally in 2014, again in writing, to Pope Francis himself,” writes Viganò. “One of the victims was a boy, allegedly abused for five consecutive years, starting at age 13. The alleged aggressor was a 21-year-old seminarian, Gabriele Martinelli.”

Archbishop Viganò made no mention in his testimony of the Rector of the seminary, Don Enrico Radice, who according to this week's statement from the Vatican, has been indicted for aiding and abetting Martinelli’s actions.

A preliminary investigation was entrusted to the judicial vicar of Como, Fr. Andrea Stabellini, who “found elements of evidence that warranted further investigation.” Archbishop Viganò said he “received firsthand information” indicating that Fr. Stabellini’s superiors “prohibited his continuing the investigation.”

“He can testify for himself, and I urge you to go and interview him,” Archbishop Viganò said of Fr. Stebellini. “I pray that he will find the courage to share with you what he so courageously shared with me.”

In his July 3 testimony, Archbishop Viganò also said he learned “how the authorities of the Holy See dealt with this case.”

“After evidence was collected by Fr. Stabellini, the case was immediately covered up by the then-bishop of Como, Diego Coletti, together with Cardinal Angelo Comastri, Vicar General of Pope Francis for Vatican City.”

“In addition,” he added, “Cardinal Coccopalmerio, then-president of the Pontifical Council for Legislative Texts, who was consulted by Fr. Stabellini, strongly admonished him to stop the investigation.

As LifeSite reported in October of 2018, a high-ranking Vatican source states that Cardinal Coccopalmerio was present at a drug-fueled homosexual party inside the Vatican in 2017, and that Pope Francis knows about it.

“You might wonder how this horrible case was closed. The Bishop of Como removed Don Stabellini from the post of Judicial Vicar; the whistleblower, the seminarian Kamil Jarzembowski, was expelled from the seminary; the two fellow seminarians who had joined him in the denunciation left the seminary; and the alleged abuser, Gabriele Martinelli, was ordained priest in July 2017.  All this happened within the Vatican walls, and not a word of it came out during the [February sex abuse] summit.”

Therefore, while today’s news regarding the indictments of Fr. Martinelli and Fr. Radice corroborates Archbishop Viganò’s testimony, it contradicts what Cardinals Coccopalmiero and Comastri reportedly said about the case and raises further questions about why action is only being taken now.