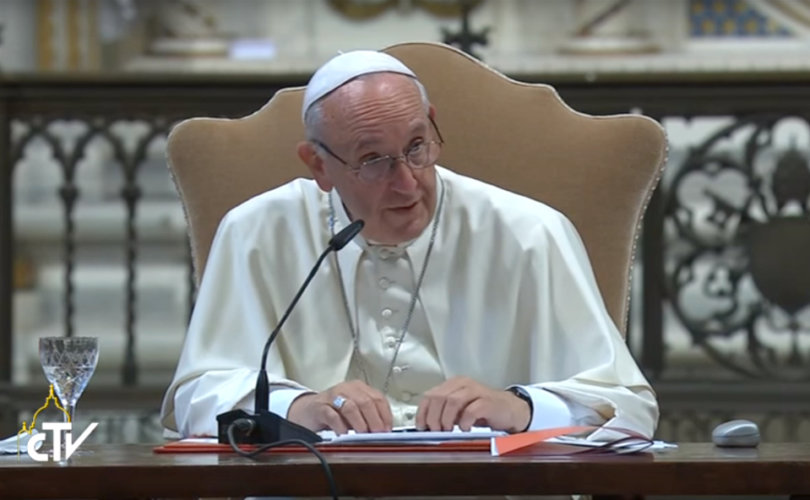 June 17, 2016 (LifeSiteNews) – The official Vatican transcript of controversial remarks made by Pope Francis this week, in which he speculated that the “great majority” of Catholic marriages are in fact invalid, significantly alters his words.

While a video of the pope’s remarks show clearly that he used the Italian words “grande maggioranza” (great majority) to indicate the proportion of marriages that he believes are “null,” the official Vatican transcript changes those words to the more measured “parte” – i.e. a part, portion, or some.

Yahoo News reports that a Vatican spokesperson stated that the Pope’s words may at times be altered in official transcripts, “after consulting with him or among aides,” in the words of Yahoo News.

The pope made the impromptu remarks on Thursday after addressing the Diocese of Rome’s pastoral congress. He was responding to a question from a layman about the “crisis of marriage.”

In his response Pope Francis speculated that many Catholic couples getting married today don’t understand what marriage is, and enter marriage with a “provisional” mindset. Because of this, he said, “the great majority of our sacramental marriages are null.”

The statement has provoked a strong response from many Catholic commentators. On his blog, well-known canonist Ed Peters expressed disbelief. “I am at a loss to understand how anyone … could seriously assert that human nature is suddenly so corrupted and Christ’s sacraments are now so impotent as to have prevented ‘the great majority’ of Christians from even marrying! How can anyone responsibly even posit such a dark and dismal claim, let alone demonstrate it?”

However, whatever the official Vatican transcript now says, Pope Francis’ original statement aligns closely with a previous report about his personal beliefs on the validity of many Catholic marriages.

In 2014, Cardinal Walter Kasper, known to be a close friend and advisor of Pope Francis, said in an interview that he had spoken with Pope Francis, who told him, “he believes that 50 percent of marriages are not valid.”

This is not the first time that the Pope’s words have been altered in Vatican transcripts.

In April, a reporter asked Pope Francis whether there are any “new concrete possibilities” for the divorced and remarried “that did not exist before the publication” of his exhortation Amoris Laetitia, making specific reference to “the discipline that governs the access to the Sacraments.”

The pope began his response by saying simply, “I can say yes, period.” This was taken by many as confirming interpretations that the exhortation opened the door to allowing Communion for divorced and remarried couples – something which the Church has always forbidden.

However the official Vatican transcript altered the pope’s statement, changing the word “posso” (I can) to the conditional “potrei” (I could) – thereby injecting a level of uncertainty into the remarks.