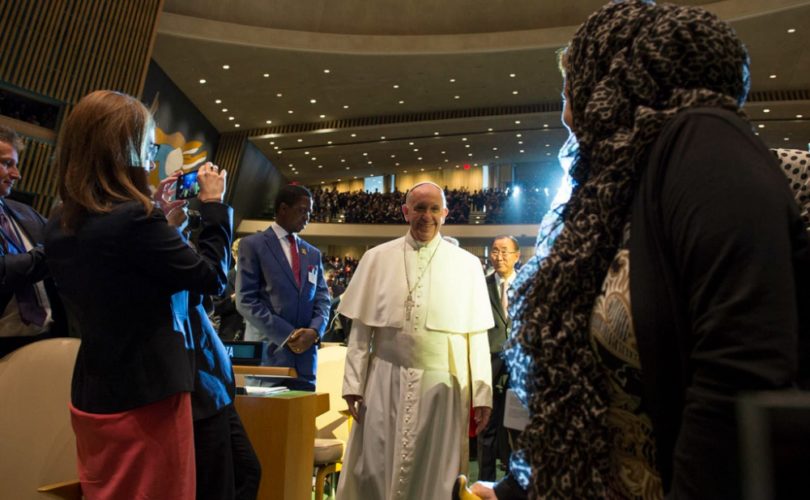 February 28, 2017 (LifeSiteNews) — Catholics must “resist” the Vatican's increasing alliance with the United Nations under Pope Francis' watch, insists a global coalition of pro-life and pro-family organizations in a new analysis. This alliance, they warn, is giving credence to the pro-abortion global population control agenda and is a direct threat to the family.

This new alliance, unthinkable under the pontificates of Pope St. John Paul II and Pope Benedict XVI, has led to what Voice of the Family (VotF) is calling an “immediate and serious threat posed to children and the family.”

The coalition of major pro-life and pro-family organizations from around the world has released a 16-page critique that charts what the groups suggest is the Vatican’s departure from its crucial role as bastion against an aggressive global culture-of-death. Specifically, the report details the Holy See’s support for the UN’s 2030 Agenda for Sustainable Development. The report is authored by Matthew McCusker, a researcher with the UK-based Society for the Protection of Unborn Children.

The report explains how the UN’s Sustainable Development Goals (SDGs) — seven goals and 169 targets to be achieved by 2030 — codify what amounts to a global pro-contraception as well as pro-abortion population control plan.

As a case in point, the VotF document was released six days before anti-Catholic population-control advocate Paul Ehrlich was scheduled to speak at a Vatican conference on “biological extinction” that began on Monday.

The report also criticizes the Vatican’s foray into the anti-family realm of “sex-education.”

Just as the UN’s SDGs call for a global “comprehensive sex education,” Pope Francis’ April 2016 exhortation Amoris Laetitia leans in the direction of sanctioning classroom sex education by omitting any mention of parents’ obligations in this regard, according to the VotF.

VotF highlighted how last year the Vatican produced a post-Amoris Laetitia sex-ed curriculum for high school students that “violate[s] Catholic teaching on sexuality education.” One Catholic psychiatrist went as far as denouncing the program as “pornographic” and “child abuse.”

And the VotF suggest that the pope’s apparent endorsement of classroom sex education in Amoris Laetitia will allow the World Health Organization, a UN agency, to implement its radical “Standards for Sexuality Education in Europe” across the world.

From four to six, children should learn about same-sex relationships and “respect for different norms regarding sexuality.”  From ages nine to 12, they should learn about the “differences between gender identity and biological sex,” and “sexual rights” as “defined by International Planned Parenthood Federation.”

And at age 15, they will be taught about “acceptance and celebration of sexual differences,” “violation of sexual rights,” and the “right to abortion.”

Pope Francis addressed the UN at the September 2015 World Summit in New York on the occasion of the adoption of the SDGs, calling the move an “important sign of hope.”

Two months later, he praised the Paris Climate Accord, which “welcomes” the SDGs. In September 2016, the pope reiterated that he was “gratified” the UN adopted the SDGs and the Paris Accord.

But as the VofF report states, goals 3 and 5 of the SDGs call for “universal access to sexual and reproductive health and reproductive rights,” terms that pro-life leaders say have been used consistently by the UN for years to push access to abortion, contraception, and sterilization.

According to the World Health Organization, a UN agency, abortion is an “integral part” of “sexual and reproductive health.” The organization has developed a program called Innov8 to implement SDG goal 3 in aid-dependent countries. The strategy uses kids’ clubs as a vehicle to promote access to abortion and contraception across Africa.

States the report: The UN and allies “have worked radically to increase use of contraception, and access to abortion worldwide, under the guise of ‘universal access to sexual and reproductive health care services.’”

Not only Pope Francis but other Vatican entities have championed the SDGs in ways that would have been unthinkable under previous pontificates, the report states.

Archbishop Jean-Marie Mupendawatu, of the Pontifical Council of Healthcare Workers, told the World Health Assembly in Geneva in May 2016, that the Holy See welcomed the SDGs. He did not mention any Vatican reservations about the phrase “sexual and reproductive health,” according to the report.

For instance, Jeffrey Sachs and UN Secretary General Ban-Ki Moon spoke at the April 2015 conference on climate change and sustainable development, which was co-sponsored by Sorondo. Sachs, head of the Earth Summit and advisor to Ban-Ki Moon, is renowned for his indefatigable promotion of population control, including advancing abortion as a means to that end. He has taken part in at least ten events at the Vatican under Francis’ watch and has met with the pope in a private audience, the report states.

The April 2015 conference concluded with Sorondo, as well as PASS president Margaret Archer, signing a statement “welcoming the SDGs,” despite the language of the goal that called for “universal sexual and reproductive health and rights.”

When Stefano Gennarini, president of the U.S. based Center for Family and Human Rights (C-Fam), tried to warn Sorondo of the danger in supporting the goals, the bishop brushed him off.

“[The SDGs] don’t even mention abortion or population control. They speak of access to family planning and sexual and reproductive health and reproductive rights,” Sorondo told Gennarini, according to the VofF report.

The report goes on to show how some of the most self-avowed enemies of the Catholic Church have suddenly, under Francis’ pontificate, become her ally.

On Monday leading population control advocate and former outspoken enemy of the Catholic Church Dr. Paul Ehrlich spoke at a conference organized by the PAS and PASS on preserving the world from extinction.

“Ehrlich is an outspoken supporter of abortion, sterilization, and contraception. Ehrlich is best known for his 1968 work The Population Bomb, in which he falsely predicted that hundreds of millions of people would starve to death in the 1970s, including 65 million Americans,” states the report.

“Ehrlich has argued that ‘compulsory population-control laws, even including   laws requiring compulsory abortion, could be sustained under the existing [US] Constitution if the population crisis became sufficiently severe to endanger the society,” it adds.

Ehrlich has called the Catholic Church “one of the truly evil, regressive forces on the planet” because she opposes abortion, sterilization, and contraception. He now says, however, that he is “thrilled” with the direction Francis is taking Church and hopes that the pope will allow “modern contraception” as the “only ethical solution” to decrease the population.

The Vatican conference is also giving the podium to population control proponent John Bongaarts, vice president of the Population Council.

Bongaarts has slammed the Catholic Church for her opposition to contraception, according to an earlier LifeSiteNews report. He also wrote that “where legal, safe abortion services should be made available.”

Voice of the Family hopes its report will help faithful bishops, priests, and laity to “resist” the assaults that threaten life and the family, even if they come from the highest levels within the Church.

“Children, born and unborn, are gravely threatened by the approval of the Sustainable Development Goals by the United Nations in September 2015,” the report states.

“The approval of the SDGs by Pope Francis and other organs of the Holy See greatly increases the threat to the most innocent and vulnerable amongst us. It is absolutely necessary for all Catholics to resist, in the manner most appropriate to their position with[in] the Church, this alignment between ecclesiastical authorities and an international agenda that pursues the destruction of innocent life and of the very structure of the family,” the report concludes.

Editor’s note: Read the full report here – The impact of the UNs’ SDGs on children and the family, and their endorsement by the Holy See.