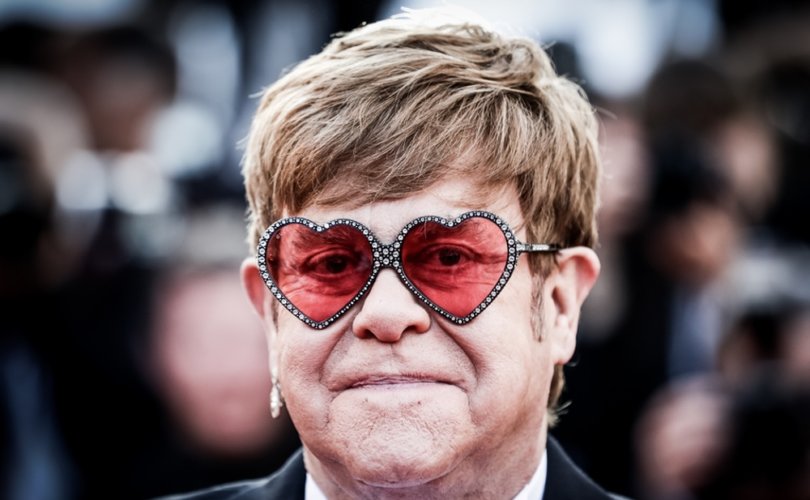 Elton John attends the screening of 'Rocketman' during the 72nd annual Cannes Film Festival on May 16, 2019 in Cannes, France.Vittorio Zunino Celotto / Getty Images

ROME, December 6, 2019 (LifeSiteNews) — The biographical musical film based on the life of Sir Elton John, the first movie by a major film studio to include a male homosexual sex scene, was partly financed by the Vatican, Italian media are reporting.

According to Corriere della Sera, recent inquiries into Vatican finances have revealed that €1 million in the Catholic faithful’s offerings to Peter’s Pence, a Vatican fund used “for the many different needs of the Universal Church and for the relief of those most in need,” was invested in “Rocketman,” with an additional €3 million going to the most recent “Men in Black.”

The revelations emerged out of investigations by Holy See prosecutors into investments in Malta involving capital held by the Vatican’s Secretary of State. At the center of the investigation is Centurion Global Fund, an investment firm based in the Maltese capital of Valletta.

Vatican money accounts for two-thirds of the capital entrusted to Centurion, making the Catholic Church its largest investor. Yet these funds went to a series of either “speculative” or morally problematic ventures which reportedly led to a 4.61% loss (about €2 million) in 2018.

Through a €6 million investment by Centurion Global Fund, the Secretariat of State became a partner to 42-year-old businessman Lapo Elkann’s eyewear and “lifestyle products” company, Italia Independent. Elkann is the grandson of Gianni Agnelli, former CEO and controlling shareholder of Fiat Automobiles.

“Another €10 million deal went through on 30 September with Enrico Preziosi, games industrialist and chairman of Genoa. And over €4 million went to finance the production of films such as the latest ‘Men in Black” and the biography of Elton John, ‘Rocketman,’” the Italian daily reported, citing several other examples.

“These are just some of the many investments made using the offerings of the faithful to Peter’s Pence, but there are others, and the situation is now being examined by the papal judiciary,” the article said.

“Rocketman” tells the story of British musician Reginal Dwight’s rise to fame as Elton John and downward spiral into debauchery through drugs, alcohol, and homosexuality. Two months before its release, the Daily Mail reported that Paramount Pictures studios were pressuring its directors to cut the homosexual sex scene but to no avail. The film premiered at the Cannes Film Festival and was released to British and American theaters in May 2019. It grossed $195 million worldwide against a $40 million budget.

But the film was censored in several countries. In Russia, where the film was released last June, five minutes were removed from the final cut, and the company responsible for distribution in the country removed all scenes involving homosexuality and drugs. The cuts were criticized by Elton John and Paramount.

It was also censored in Malaysia. Safaruddin Mohammad Ali, director of Malaysia’s Film Censorship Board's films unit, said: “We do not allow any scenes that promote LGBTQ in films that are for public viewing,” adding that “Although it is about the real life of Elton John, it is not for him to allow the public to see whatever he does or whatever activities he indulges in that is not our culture.”

“Rocketman” was banned in Samoa, a conservative Christian nation. Principal Censor Leiataua Niuapu explained: “It’s a good story, in that it’s about an individual trying to move on in life. He [Elton John] went through a difficult family life and managed to move on and become very successful. But there are acts that are not good for public viewing and against the law.”

According to Corriere, Centurion Global Fund’s fund manager is an Italian resident in Switzerland, Enrico Crasso. The 71-year-old former banker at Credit Suisse, and owner in Lugano of Sogenel Holding, has “managed the Vatican coffers for years,” they said. “For this he has received numerous formal letters of thanks from the Secretariat of State and has been awarded a gold medal of merit by the pope, not to mention millions of euros in commissions. For some months now, inside the Vatican walls, his reputation has begun to show signs of tarnishing. But in Malta he is still the one who decides where to invest the Pope’s money.”

What’s behind these risky, and risqué, investments? The Holy See Press Office responded in a statement, saying: “Investigations are in progress, and lines of enquiry which may help clarify the position of the Holy See with respect to the aforementioned funds and any others, are currently being examined by the Vatican judiciary, in collaboration with the competent authorities.”

News of the Vatican’s investment in “Rocketman” comes just two months after a raid on the Vatican Secretariat of State, carried out by now-former Vatican police commander Domenico Giani, on the orders of Vatican prosecutors.

The National Catholic Register reported in October that the raid was aimed primarily at Cardinal Angelo Becciu, former number two in the Secretariat of State, and previous employees of the dicastery. As sostituto, Cardinal Becciu was instrumental in ending the first external audit of the Vatican by the auditing giant PwC (Price Waterhouse) in 2016, agreed upon by Cardinal George Pell and the Council for the Economy.

L’Espresso reported that the raid focused on “misuse of Peter’s Pence and a dubious London property transaction,” Edward Pentin said at the time. The Financial Times later revealed that “$200 million in Swiss bank accounts controlled by the Secretariat of State were used in 2014 to finance a luxury property development in London’s Chelsea district,” he added.

News of the Vatican’s €1 million investment in “Rocketman” also follows revelations that the pro-abortion, pro-gender ideology Ford Foundation provided $2 million in grants to key groups involved in the recent Amazon Synod, including one run by the Brazilian Bishops Conference. Cecile Richards, former president of Planned Parenthood, sits on the board of the far-left American foundation.

At an October 19 synod briefing, Paolo Ruffini, prefect of Vatican communications, said that while he is not familiar with the financing process of the Ford Foundation, “as a Christian and as a Catholic, I think it is good that the money goes to a good end.”

Ruffini said to this correspondent during the briefing: “I would ask you: do you think it was better for the Ford Foundation to use this money for other, possibly non-Christian ends?”

And Peter’s Pence being used to finance “Rocketman”?

LifeSite contacted the Holy See Press Office for comment, but has not yet received a response.