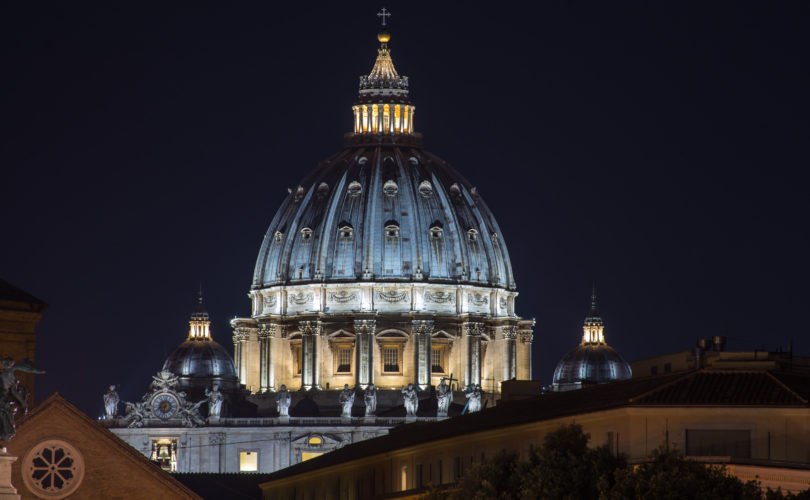 VATICAN CITY, May 11, 2021 (LifeSiteNews) – In what would appear to be a first, the Vatican has succumbed to a common practice among abortion advocates and repeatedly mentioned the pro-abortion term “pro-choice” in a recent letter describing politicians who support abortion.

Cardinal Luis F. Ladaria, Prefect of the Congregation for the Doctrine of the Faith (CDF), used the terminology in a May 7 letter to Archbishop José H. Gomez, president of the U.S. Conference of Catholic Bishops (USCCB). Cardinal Ladaria was writing in response to Archbishop Gomez’s letter to the CDF informing the congregation that the U.S. bishops were drawing up a policy on the distribution of Holy Communion to politicians who support abortion.

Of these, Joe Biden is the most prominent and well known of Catholics in the public life who support abortion. Any USCCB policy on distributing Holy Communion would be in response to issues the Church would face from Biden, as Archbishop Gomez outlined in his letter after Biden’s inauguration in January.

In his letter admonishing Gomez for such a plan, Cardinal Ladaria employed the term “pro-choice” four times. He referred to “pro-choice politicians” twice, as well as “pro-choice legislation” and a “pro-choice position.”

One such example of the CDF’s use of this term is given when noting how local bishops should “reach out to and engage in dialogue with Catholic politicians within their jurisdictions who adopt a pro-choice position regarding abortion legislation, euthanasia, or other moral evils, as a means of understanding the nature of their positions and their comprehension of Catholic teaching.”

Furthermore, popes and members of the hierarchy have consistently referred to supporters of abortion in precise terms, not the ambiguous “pro-choice” as favored by abortion supporters.

In Pope John Paul II’s 1995 encyclical Evangelium Vitae, he referred to abortion supporters as “pro-abortion” and used the widespread “pro-life” when referring to those who sought to defend the right to life of the unborn.

While abortion advocates such as Biden promote the right of mothers to “choose” whether to have an abortion or not, John Paul II firmly rejected the notion that a Catholic could hold this position: “We are facing an enormous and dramatic clash between good and evil, death and life, the ‘culture of death’ and the ‘culture of life.’ We find ourselves not only ‘faced with’ but necessarily ‘in the midst of’ this conflict: we are all involved and we all share in it, with the inescapable responsibility of choosing to be unconditionally pro-life.”

“Abortion and euthanasia are thus crimes which no human law can claim to legitimize,” the Pope continued. “There is no obligation in conscience to obey such laws; instead, there is a grave and clear obligation to oppose them by conscientious objection.”

In 2002, then-Cardinal Ratzinger wrote the CDF’s letter “Doctrinal note on some questions regarding the participation of Catholics in political life,” echoing the Pope’s words. Cardinal Ratzinger stated that Catholics “have the right and the duty to recall society to a deeper understanding of human life and to the responsibility of everyone in this regard. John Paul II, continuing the constant teaching of the Church, has reiterated many times that those who are directly involved in lawmaking bodies have a grave and clear obligation to oppose any law that attacks human life. For them, as for every Catholic, it is impossible to promote such laws or to vote for them.”

Indeed, the 1974 CDF document “Declaration on Procured Abortion” was firm about the danger of the terminology and arguments of the so called pro-choice movement. “One can never claim freedom of opinion as a pretext for attacking the rights of others, most especially the right to life,” the CDF wrote.

HLI reminded readers how Dr. Bernard Nathanson, himself a founding member of pro-abortion lobby group NARAL and later a pro-lifer, wrote, “I remember laughing when we made those slogans up. We were looking for some sexy, catchy slogans to capture public opinion. They were very cynical slogans then, just as all of these slogans today are very, very cynical.”

Despite some wavering in the pro-abortion lobby about continued use of the 1970’s originated term today, it still remains the standard way by which abortion advocates and supporters describe themselves. For instance, abortion lobby group NARAL includes the term inn its official title “NARAL pro–choice America.”

So also does the National Abortion Federation, which has as its website name prochoice.org.

These high profile examples offer an insight into what the term has come to mean in modern society, namely “the right to choose abortion,” as NARAL itself wrote.

With its adoption of the pro-abortion terminology, the Vatican appears to be taking making an ideological surrender, which Pope John Paul II and Cardinal Ratzinger would have sternly warned against.

Speaking to LifeSiteNews, a representative of Restoring the Faith media warned of the power of the Vatican’s words: “Words are not merely a useful conveyance of ideas or information; they contain within themselves an inalienable meaning and power. To wave the white flag and surrender the language is worse than a tactical defeat, it is no less than an abdication of moral authority, perhaps even a treasonous betrayal of the battle-scarred troops fighting for the cause of life.”

This was echoed by catechist and Catholic author Deacon Nick Donnelly, who wrote to LifeSite via social media: “Only five months ago the CDF issued a statement trumpeted around the world as the Church accepting ‘vaccines’ from babies murdered through abortion. Now it has adopted the euphemism ‘pro-choice’ used to hide the abominable reality of abortion. That the CDF could use such a phrase shows how far the curial officials have abandoned even Vatican II’s understanding of abortion as an ‘unspeakable crime.' (GS 51) For the two billion-plus babies murdered in the ‘silent holocaust’ of abortion, this was ‘no-choice.'”