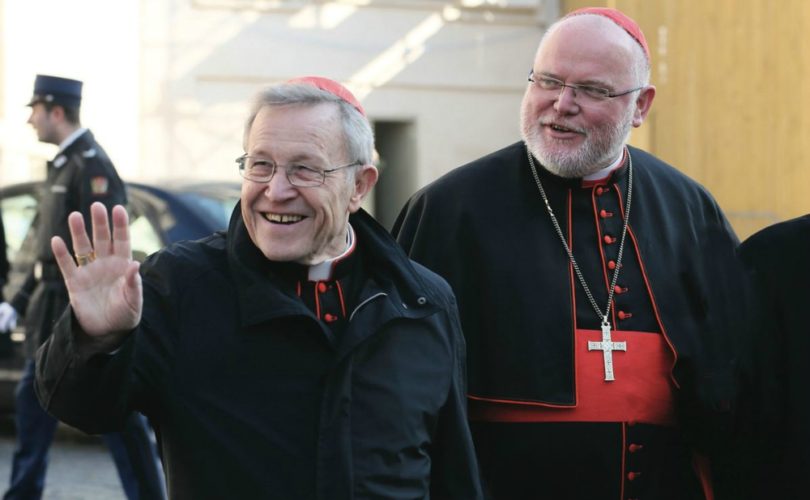 September 13, 2019 (LifeSiteNews) – As the Catholic bishops of Germany prepare to undertake a “binding synodal path” questioning the Church’s teachings on priestly celibacy, the role of women, and sexual morality, Cardinal Marc Ouellet of the Vatican’s Congregation for Bishops warned them their plans were “not ecclesiologically valid.”

This comes on the heels of the archbishop of Cologne, Cardinal Rainer Woelki, saying that the Catholic Church in his country risks entering into “schism” and becoming the “German national church.”

“Everywhere I was confronted with concern about the current developments in Germany,” Woelki said of his recent trip to the United States. “In many encounters, the concern was palpable that the ‘synodal path’ leads us onto a German separate path [‘Sonderweg’], that we, at worst, even put at risk the communion with the Universal Church and become a German national church.”

“Nobody can want this,” he said, “and so we should take seriously this warning.”

According to CNA, it “cited the bishops’ proposed partnership with the Central Committee of German Catholics,” a group that supports women’s “ordination” and dissents from Church teaching on sexuality.

Matthias Kopp, a spokesman for the German bishops' conference, downplayed the Vatican letter and accompanying document in comments to the U.S. bishops’ Catholic News Service (CNS) today. He said the Vatican’s legal assessment was based on an earlier draft of the German synod’s statute and that Ouellet and Cardinal Reinhard Marx are meeting next week in Rome “to clear up any misunderstandings.”

“How can a particular church deliberate in a binding way if the themes dealt with touch the entire church?” the Pontifical Council for Legislative Texts wrote. The “binding synodal path” is also supposed to address Church power structures, and the way its statutes are written “seemed to imply that the bishops’ conference and the lay Central Committee of German Catholics ‘are equal’ and would send an equal number of participants, would share the duties of presiding over the assemblies[,] and would have an equal vote,” something the Vatican objected to as well, CNS reported. The Pontifical Council for Legislative Texts apparently also reminded the German bishops that the Church is not a democracy.

The German bishops are notoriously liberal and for years have advocated for allowing sacrilege via Communion for those in adulterous relationships, something they celebrated as having been officially adopted by Pope Francis in Amoris Laetitia. They have also permitted Protestants to receive Holy Communion under some circumstances, which also goes against the Church’s perennial teaching. Two German bishops recently endorsed a book calling for the Church to bless same-sex relationships, despite the fact that the Church teaches such relationships are intrinsically disordered and “under no circumstances can they be approved” (CCC 2357).

The German bishops are heavily involved in financing preparations for the upcoming Amazon Synod in October, during which some of the same topics from their country’s synod will be considered for the whole Church.

There are some faithful German prelates who have cautioned against the “binding synodal path” and/or the Amazon Synod’s working document, such as Cardinal Walter Brandmüller, one of the two remaining dubia signers; Cardinal Gerhard Müller, former Prefect for the Congregation of the Doctrine of the Faith; and Bishop Rudolf Voderholzer of Regensburg.