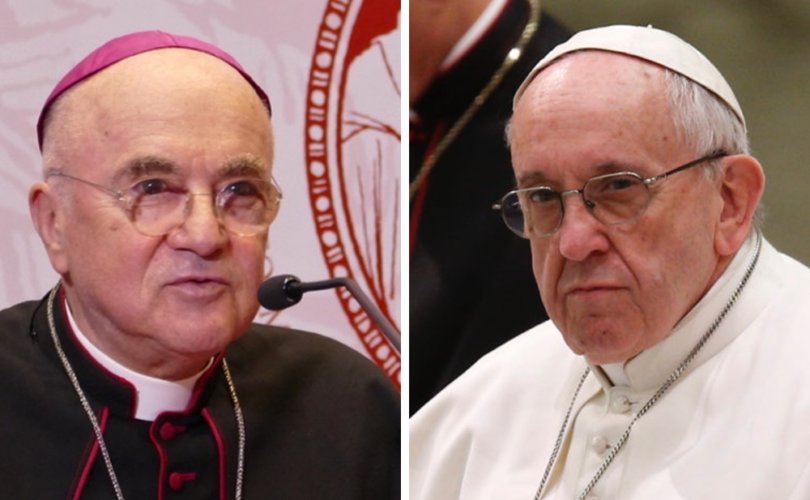 ROME, September 20, 2019 (LifeSiteNews) ― A veteran Vatican journalist has revealed that a Vatican whistleblower told him that Pope Francis is ‘provoking’ a schism in the Catholic Church.

Dr. Robert Moynihan, founder and editor-in-chief of Inside the Vatican magazine, recently published remarks he says Archbishop Carlo Maria Viganò made to him in response to Pope Francis’ recent reflections on schism.

On his September 10 flight to Rome from a five-day trip to Madagascar and Mozambique, the Argentinian pontiff told reporters that he was “not afraid of schisms” and that a schism “is always an elitist separation stemming from an ideology detached from doctrine.”

“Pope Francis is saying that because he knows the Amazon Synod may provoke a schism,” Viganò allegedly told Moynihan.

“He is ready to say others are making the schism, but (by his actions in continuing to support the Amazon Synod) he is provoking it himself,” the Vatican whistleblower continued.

“Is this the attitude of a pastor who cares for the faithful? It is his own duty to prevent a schism.”

Moynihan published the remarks on September 11, saying that the Archbishop had made them to him in conversation that day.

The famous commentator on the Catholic Church also published two opinions he found in  reader-based comments connected to a LifeSiteNews story about Francis’ most recent airplane interview, “Pope Francis welcomes honest criticism: ‘This is loving the Church’”.

The first, by reader “Luxsit”, indicated fears that those Catholics who hold fast to perennial Catholic doctrine are being “set up” as “scapegoat ‘schismatics’”.

“I think it is likely we are being setup to be labeled the scapegoat ‘schismatics’ when the Vatican officially becomes apostate (and the real schismatics), though the groundwork was laid decades ago,” the commenter wrote.

“In the eyes of the world, that will support the Vatican’s claims that anything orthodox is ‘outside the Church.’ It is almost a perfect ploy for secular governments intent on eliminating Christianity from any public presence and moral conscience of the world.”

“I believe you are spot on here,” replied reader “Borghesius” in the second remark Moynihan cited.

“The liberals could have split off from the Church at any time in the previous 4 pontificates: they have been in a de facto schism ever since the (dissenting) response to Humanae Vitae,” he continued.

“But Francis gives them the opportunity, and they want it to appear, that THEY are Church and the Catholics are splitting off from them. That way they get the money, power, property, and can claim to be the Catholic church when by belief they are nothing of the sort. All that won’t last, if you are separated from the Source.”

Taken together, all these remarks alarm Moynihan, who sees in them evidence that there is danger of “a break.”

Such remarks are part of  “the drumbeat of a criticism of many of Pope Francis’ decisions and actions, from the sexual abuse crisis, to the reform of the Roman Curia, to the agreement with the Chinese government, to his closing of conservative religious orders, to his seeming focus of environmental issues though all previous Popes focused above all on the sacrificial life and death of Jesus Christ, and on what that meant for all human beings,” he wrote.

Moynihan notes that there are some highly placed ecclesiastical critics of the controversial decisions of the pontificate―and that only two of them are Americans. He names Cardinals Brandmüller, Burke, Eijk, Müller, and Sarah, as well as Bishops René Henry Gracida and Athanasius Schneider.

“These critics seem to be persuaded that the Church is being badly led by a group of insiders who have persuaded the Pope to go along with a number of initiatives which depart in lesser and greater ways from traditional Catholic teaching,” he wrote.

“Some of these critics think the teaching of the Pope, or those chosen and supported by him, has reached the level of heresy — the level of contradicting defined Catholic doctrine,” he continued and directed readers to Cardinal Brandmüller’s critique of the Amazon Synod’s controversial Instrumentum Laboris (working document).

Moynihan warned that Pope Francis and his circle may have underestimated how much the “world” hates the Church.

“Very powerful secular forces seem anxious to subject the Church to their worldly agenda, which begins as a call for “mercy” and ends with an attack on all traditional Christian doctrinal and moral teaching,” he wrote.

“As abortion is ever more widely accepted, society as a whole has become callous to the taking of human life,”  Moynihan observed.

“Pope Francis has seemingly downplayed the defense of human life, the right-to-life of the innocent,” he continued.

“In this context, his actions seem almost incomprehensible to pro-life Catholics. Why has he seemingly lessened the Church’s commitment to the pro-life cause precisely at the moment when it is most needed?”

The Vatican reporter also acknowledged that the doctrines pertaining to marriage are under threat.

“The traditional teaching on the indissolubility of marriage is critical to a defense of the family, and of the right of children to grow up with a father and mother,” he recalled.

“The seeming downplaying of the indissolubility of marriage seems obviously directed to the situation of millions whose marriages have failed, to provide pastoral care for them,” he continued.

“But in the long term, the diminishing of the marital ideal will likely create an even more difficult situation for the flourishing of family life in time to come. Why has Pope Francis seemingly not recognized this?”

Moynihan concludes by saying that “a change of direction” and “a meeting to clarify positions” is necessary, but that “time is drawing short.”