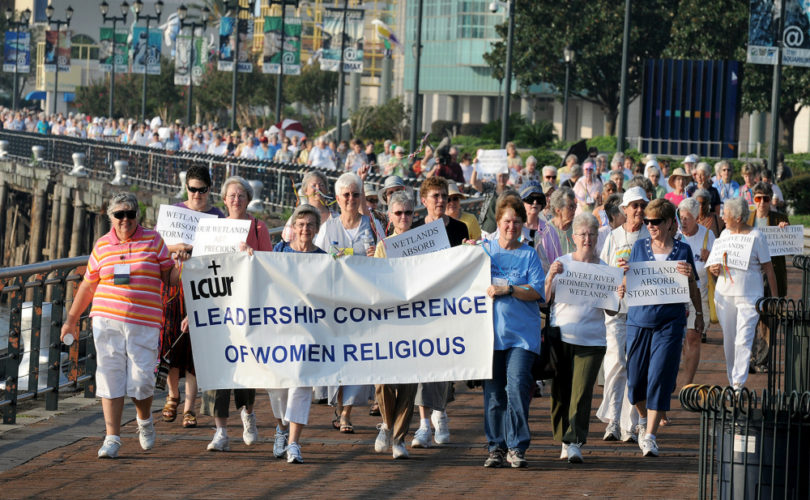 U.S. nuns with the liberal Leadership Conference of Women Religious march for an environmental cause in 2009.

The Vatican’s high-profile five-year study of some women’s religious orders in the U.S. has come to an end, and the final report is scheduled to be released at a press conference December 16.

While the investigation was launched amidst concerns that the nation’s older and less vibrant religious orders had adopted a “secularist mentality, a Vatican spokesmen says the final report will convey a “positive message.”

The report “should allay the fears of many Catholic sisters about the investigation,” Vatican spokesman Father Thomas Rosica told the Detroit Free Press. “It will hopefully be a very positive message for women religious in the United States.”

The Apostolic Visitation to the religious communities was announced in January 2009, sparking backlash from liberal Catholics and the secular media, including the accusation that the Vatican was on a “witch hunt.”

Many of the religious orders that sparked the Vatican’s concerns were founded for ministries such as teaching and nursing, but later shifted focus from their original charism to feminism and liberal ideology.

The investigation initially set out to look at the religious orders’ community, prayer, and apostolic life in order to assess the vitality of religious life in the U.S.

The financial and demographic data to be collected was crucial to understand the “gravely underfunded retirement needs of U.S. sisters,” according to a report by the National Catholic Register, which also said the National Religious Retirement Office projects a $9.6 billion retirement deficit for religious orders by the year 2030.

But about a year into the process, Cardinal Franc Rode, then-head of the Congregation for Institutes of Consecrated Life and Societies of Apostolic Life, which was handling the investigation, told Vatican Radio he had been alerted “to some irregularities or deficiencies” in the way some of the U.S. religious sisters were living.

“Above all, you could speak of a certain secularist mentality that has spread among these religious families, perhaps even a certain 'feminist' spirit,” Cardinal Rode said.

The tilt toward secular liberalism by some orders has oftentimes included open support for abortion, contraception, divorce, and homosexuality, and while there has been some pushback from the left regarding the investigation, many faithful Catholics have expressed appreciation for the attention paid to what is viewed by many as a major crisis in the U.S. Church.

Along with the move toward radical feminism over the last 40 or so years, their numbers have dropped drastically. Thousands of sisters left convents in the 1960-70s and recruits since have not replaced them. Numerous communities have merged or even been shuttered. This left the average age of US active sisters around 70.

The exception to the rule is found in the communities that have upheld the Church’s traditional religious life, with young, vibrant members and growing numbers.

Some 400 communities were involved in the Apostolic Visitation process, receiving questionnaires about their ministries, liturgical practices, spiritual and theological formation, financial statements and demographic information about members’ ages and living arrangements. The religious communities spanned the spectrum from liberal to traditional.

“There were a lot of unfounded fears” about the process, Father Rosica said.

The report will be available online and he said the Vatican's communication office will likely make an announcement in the coming week about the December 16 conference, in which he will take part.

Along with Father Rosica will be Cardinal João Braz de Aviz and Archbishop José Rodríguez Carballo, of the Vatican's Congregation for Institutes of Consecrated Life and Societies of Apostolic Life.

The press conference will include: Sister Sharon Holland, a leader of Michigan’s Sisters, Servants of the Immaculate Heart of Mary (IHM); Mother Agnes Mary Donovan, the founding Superior General of the Sisters of Life and chairperson of the Council of Major Superiors of Women Religious; and Mother Mary Clare Millea, who led the Apostolic Visitation for the Vatican.

Sister Holland is currently the president of the Leadership Conference of Women Religious (LCWR), an umbrella organization for a group of liberal religious communities which last year was put under a mandate of reform for “serious doctrinal problems” by the Vatican’s Congregation for the Doctrine of the Faith (CDF). She is also a canon lawyer who has worked at the very Vatican congregation that ordered the Apostolic Visitation.

Discord persisted throughout the five years since the Apostolic Visitation was announced and many liberal religious communities refused to complete questionnaires for the visit.

Cardinal Rode and his secretary retired while the Apostolic Visitation was underway, and the National Catholic Register said their replacements showed “little sympathy for, or clear knowledge of, the motivation for the visitation.” It is the new leadership who produced the final report.

There were also numerous accounts of efforts to interfere with the visit within some religious communities, according to the Register, including intimidation by superiors, warnings for sisters not to make complaints about their order, and debriefing meetings where sisters were told to report on their interactions with the visitors, calling into question how comprehensive and accurate the final report would be.

Father Rosica, who took part in the visitation, lauded the nuns, saying he owed his vocation to the presence of religious sisters in his life.

“I can't imagine my religious life, my priesthood, without the presence of women religious,” he said.