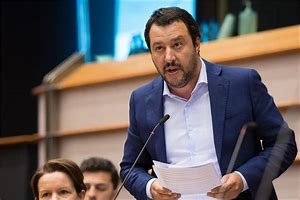 May 6, 2019 (LifeSiteNews) – The Vatican would deny a papal blessing to Italian Interior Minister Matteo Salvini because of his strong policies on illegal immigration, a close aide to Pope Francis said, putting the Catholic government official on the par with an abortion provider and Venezuelan dictators.

Cardinal Konrad Krajewski said papal blessings can be requested for religious events such as First Communions, Confirmations, weddings, and anniversaries, Breitbart’s Thomas Williams reported, but cannot be given to someone if it would create scandal.

“But we do not give these to everyone,” Krajewski told the Italian daily Il Messaggero. “Could we ever give one, just as an example, to a hospital where abortions take place? Or can we give one to certain characters in Venezuela who are asking us for one? No, certainly not.”

“As another example,” Krajewski said, “if Salvini asked us for one, we would deny it.”

The Vatican would refuse Salvini a request for a papal blessing because of Salvini’s tough policies to curtail illegal immigration, according to the Il Messaggero report, at a time when the Vatican is pushing for more welcome for migrants.

Il Messaggero had also reported that another cardinal told Salvini several months ago that he would “never receive a papal audience” unless he did change the policy of closed ports, Williams’ report said.

Two Italian publications, Il Giorno and Il Mio Giornale, reported in late March that Francis had repeatedly refused Salvini’s efforts to schedule a private audience with him, and also that Salvini had been informed the pope’s refusal to meet with him was because of Salvini’s immigration stance. The pope was not opposed in principle to a conversation with Salvini, the two outlets’ reports said, but the minister had been told “that a meeting could not occur if Salvini continues in his tough position regarding migrants.”

Immigration policy is a prudential issue upon which Catholics can disagree in regard to the specifics of its handling. Abortion, on the other hand, is a mortal sin and according to Church teaching a non-negotiable.

Europe has seen large-scale to crisis-level immigration since 2015, mostly from Muslim-majority countries in the Middle East and Africa.

The crisis is fraught with controversy. Many migrants risk and lose their lives to move, and there is rampant disagreement over refugee status, national sovereignty and concerns over security, terrorism and crime in addition to the burden of funding social support for migrants and refugees.

And throughout, a complicit media has frequently downplayed any downside to open borders in most arenas.

Francis has condemned walls related to national borders on more than one occasion – an ostensive comment toward U.S. President Donald Trump for Trump’s national security policies. The pope said in 2016 that “building walls” instead of “building bridges” “is not Christian,” and then again last month, “He who builds a wall ends up a prisoner of the wall he built.”

The pope has condemned attempts to stem the tide of Muslim immigration into Europe time and again, even at the cost of national security.

After millions of mostly Muslim immigrants poured into Europe in 2017, Francis called for “broader options for migrants and refugees to enter destination countries safely and legally.”

“The principle of the centrality of the human person … obliges us to always prioritize personal safety over national security,” he stated.

And further signaling the pope’s take on open immigration in Europe more recently was the headline from the Vatican newspaper L’Osservatore Romano on the hijacking of a ship in the Mediterranean by migrants; the paper’s headline stating that the migrants were “hijackers out of necessity,” since the ship that had come to rescue them would have taken them back to Tripoli had they not overtaken the captain and crew.

Refusing a papal blessing and attempts at a papal audience over Salvini’s immigration stance runs counter to Francis’ persona of mercy, and also stands in sharp contrast to the pope’s ongoing association with people and groups that oppose Catholic teaching on life and family, in particular abortion.

Francis publicly praised her in 2016 as one of Italy’s “forgotten greats” because of her work with refugees, comparing her to famous historical statesmen such as Konrad Adenauer and Robert Schuman.

The pope said at the time that she offered the best advice to Italy on learning about Africa, and admitted she thinks differently from Catholics.

“True, but never mind,” Francis said. “We have to look at people, at what they do.”

Last September, the pope gave a private audience to Bono, the openly pro-abortion front man of the Irish rock band U2.

Francis’ Vatican regularly invites and hosts many well-known advocates of abortion and population control to speak at its conferences.

The pope likewise has met several times with LGBT individuals, representatives and activists, and shown no hesitancy to pose for photos related to the visits.

In 2016 amid Italy’s migrant crisis, the country’s then-Prime Minister Matteo Renzi had warned that Italy could not survive another year of mass immigration like the year prior, noted Williams, with more than 155,000 migrants entering Italy unchecked.

“Either we block the influx by 2017 or Italy will not handle another year like the past year,” Renzi had stated on national television.

While he recognized the gravity of the problem, Renzi said he could do nothing to mitigate the flow of migrants without approval from the European Union.

While running for office in 2018, Salvini had said Italy is a sovereign nation and must defend its borders, regardless of whether the E.U. agrees, Williams reported, a position that has made Salvini vastly popular with Italian citizens.

In the interview last week, Krajewski gave other examples of people who don’t qualify for a papal blessing because of their behavior.

“Today a bishop came and asked for (a blessing) for a country’s secret police since he was the chaplain, but it cannot be done,” the cardinal said. “And what if a factory owner who doesn’t pay his workers asked us?”

Krajewski did say that if Salvini were getting married and asked for the pope’s blessing, the Vatican would consider it.

Krajewski has been papal almoner since his August 2013 appointment by Francis. Francis named him an archbishop at the same time in 2013 a few months after his election to the papacy, and elevated him to cardinal in June 2018.

Formally known as Almoner of His Holiness, he is the member of the papal household tasked with performing works of charity on behalf of the pope, and one of a small number of Vatican officials who continue in office when a pope dies or resigns. All proceeds from the papal blessings requested by Catholics go to papal charities.

Krajewski is behind implementing Francis’ initiatives on behalf of the homeless in Rome, including dormitories, showers, a barber’s booth, medical appointments, outings to the beach, and a circus for the homeless and poor.