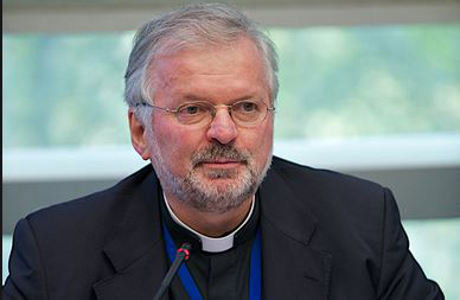 LEUVEN, Belgium (LifeSiteNews) – The Apostolic Nuncio to the European Union (EU) died December 2 after a bout with COVID-19 despite having received at least one COVID jab.

The report suggested that the prelate had received a partial regimen of the abortion-tainted COVID jabs before his death, stating that “Giordano had not completed the course of vaccinations and had been admitted to intensive care at the university clinic in Leuven, Belgium. His condition progressively worsened, until his death.”

During his homily at a beatification Mass in April, at which time he was Nuncio to Venezuela, Giordano prayed that the newly Blessed José Gregorio Hernández would “intercede so that access to vaccines can be achieved together without divisions or resistance.”

A report in the Tablet noted that the Venezuelan government had been under pressure to purchase AstraZeneca’s COVID shots, but President Nicolás Maduro had stalled on the order due to concerns over the adverse effects.

Giordano is not the first high-ranking prelate to suffer gravely in relation to the novel coronavirus.

American Cardinal Raymond Burke revealed in an August 11 tweet that he had contracted COVID, saying at the time that he was comfortable and receiving “excellent medical care.”

However, after just one week Burke’s condition rapidly deteriorated and he developed severe pneumonia, subsequently being placed on a mechanical ventilator. LifeSiteNews’ report at the time noted that the cardinal was not responding to treatment and that his brother bishops, Athanasius Schneider and Carlo Maria Viganò, had urged the faithful to pray for his health.

Despite Cardinal Burke’s great suffering, Pope Francis launched a thinly veiled attack at the ailing prelate, apparently referencing him in comments made during an in-flight press conference on return from the papal visit to eastern Europe in September.

“Even in the College of Cardinals, there are some deniers and one of them, poor man, was hospitalized with the virus,” Pope Francis told reporters with a smile, without clarifying exactly what it is these cardinals deny. A Vatican News translation originally used the term “deniers,” and then changed it to “anti-vaxxers,” a cached version of their webpage shows.

“But life is ironic,” the Pope continued. “Yes, I can’t explain it well: Some say it’s because of the difference of where the vaccines come from that there has not been sufficient testing and they are afraid.”

“In the Vatican, everyone has been vaccinated except a small group under study to know how to help them,” the pontiff said.

Cardinal Burke has since recovered.

Since Giordano’s death, the Pope has made no public comments. Vatican News, the official news partner of the Holy See, characterized Giordano as a “gentle and good man, of great balance and intelligence, at the service of the Church and the people, even in the difficult diplomatic activity.”

Before his appointment as Apostolic Nuncio to the EU – a post he assumed in May – Giordano served as the secretary-general for the Council of Episcopal Conferences of Europe (CCEE), a body for the collaboration of episcopal conferences throughout Europe, and was stationed at the CCEE’s headquarters in St. Gallen, Switzerland, for 13 years.