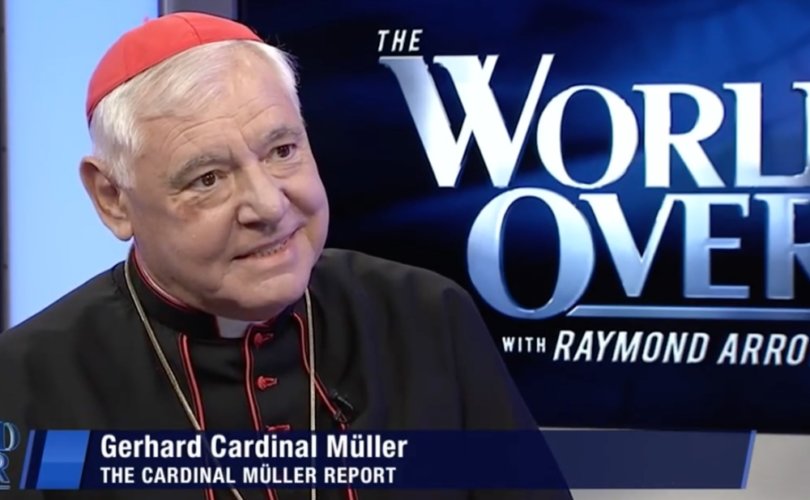 Cardinal Müller, the former head of the Congregation for the Doctrine of the Faith (CDF) told Arroyo on “The World Over” last night that Pope Francis’ “friends” may have “a strange idea that the doctrine of the Church is too hard” but that neither they nor the pope can do anything to change it.

“The Pope is not the boss of the Church,” Müller said. “The Pope cannot do [whatever] he wants.”

Müller and Arroyo had been discussing the recent Synods which the TV host likened to “mini-Vatican 2’s.” The Cardinal conceded that there was a movement to change doctrine behind the synods, but that it was impossible for a synod or a pope to do that.

“A Synod of the bishops is not an ecumenical council,” Müller said. “It has no authority. Even if the pope is speaking about authority, it is not a magisterial authority. The Pope cannot change the basic constitution of the Church. He cannot give a new definition of the primacy of the bishop of Rome or what bishops are to do.”

Müller concedes that there is a movement to change the doctrine of the Church lying behind recent Synods, but that radical change is impossible.

“There is a development of doctrine, but if you say today ‘A’ and tomorrow ‘B’, from A to B is not a development [but] a contradiction. And it is absolutely impossible for anyone in a state of mortal sin … to receive Holy Communion before he has confessed his sin and received absolution. There is no possibility to change this basic fundamental of sacramentology.”

As his example, Müller stated that homosexual acts can never be considered licit.

But Arroyo challenged the cardinal on his belief that the Synod cannot change doctrine. He pointed out that the Pope wrote in the new Apostolic Constitution that Synod’s “final documents, with the approval of Peter, the Pope, has magisterial authority.”

Müller replied that he did not know from what source this statement developed from.

“It seems to be a contradiction to the First Vatican Council and the Second Vatican Council,” he said. “The ordinary magisterium is what the Church is teaching today and not a Synod because [although] a Synod is an assembly of some bishops, it is not an ecumenical council.”

Meanwhile, even if the Pope were to declare that its documents were his own magisterial teaching, this would be limited to what is in accord with doctrine, the CDF ex-chief said.

“The teaching of the Pope must always be in concordance … with the teaching of the Holy Scripture and the Apostolic Tradition and [with what] all the magisterium before has said,” Müller insisted. “He cannot be in contradiction [to it].”

While contemplating the Youth Synod and a future Synod that may reevaluate the importance of celibacy for the priesthood, Müller turned again to thoughts of the false friends of Pope Francis.

“It’s a strange idea,” he repeated. “The whole People of God, lay people and the bishops, first have to listen to the Word of God. We are not the masters of the Church, and also the Pope is not the boss of the Church. He cannot do what he wants.”

The Cardinal reminded Arroyo that Benedict XVI had said that the Pope is the person in the Church most bound by revealed truth and the revealed faith.

“I think that at the side of the Pope there are many people with a very low understanding of Catholic theology,” Müller said. “To be the counsellors of the Pope [you] must be very profound theologians. The Pope must listen to experts.”

The cardinal pointed out that the Church is a sacrament, sign and “instrument for the intimate union of God with man”, not a “worldly organization” or a political party “who can change the program according to the voters.”

He also took issue with a misuse of the name of the Holy Spirit as an excuse to introduce “new revelation.”

“It’s very important to listen to what God is saying to us, but not in the Evangelical, Pentecostal way as a new revelation of the Holy Spirit,” Müller said.