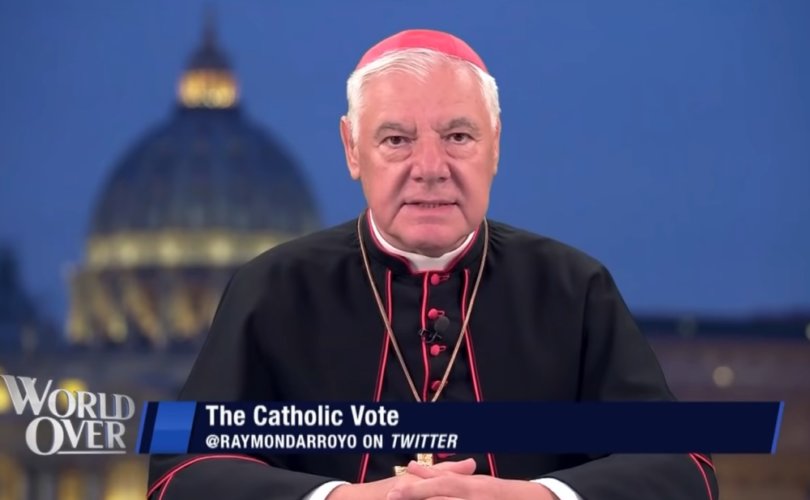 September 15, 2020 (LifeSiteNews) – Cardinal Gerhard Müller, the former Prefect of the Congregation for the Doctrine of the Faith, told EWTN’s Raymond Arroyo that it is “better to vote for a good Protestant than for a bad Catholic.”

“I think as we are citizens in a pluralistic state with religious freedom. And, I don’t support a candidate in Germany because he is Catholic but because he has the right understanding of life and the basics for human rights,” Müller told Arroyo in a September 10th interview on the EWTN show The World Over.

“And it’s better to vote for a good Protestant than for a bad Catholic. We must judge according to what they are doing and not only [according] to their words. That is biblical criteria. Look to the fruits.”

Müller made the response about voting for a “good Protestant” over a “bad Catholic” after a question from Arroyo regarding the group called “Catholics for Biden,” and whether or not a Catholic could vote for a pro-abortion politician.

The recently launched group “Catholics for Biden” claims that one can be a Catholic and vote for Biden. Pro-life priest Fr. Michael Orsi  told LifeSiteNews in early September, however, that the “whole idea of Catholics for Biden is a scam.”

The U.S. Presidential elections are scheduled to take place on November 3 in what is likely to be a close race between the two biggest political parties in the U.S.

Former vice president Joe Biden, who is pro-abortion while touting his Catholic faith, will represent the Democratic party, while U.S. President Donald Trump, who is pro-life, will seek another term on behalf of the Republican party.

Biden has publicly touted his Catholic identity throughout his career in politics, but is a fanatical supporter of abortion rights in all its forms, which runs contrary to the Catholic church's official teaching that abortion is an “abominable crime.”

In his interview with Müller, Arroyo made reference to the United States Conference of Catholic Bishops (USCCB) document titled, Forming Consciences for Faithful Citizenship: A Call to Political Responsibility.

The USCCB says its document is intended to help as a “guidance for Catholics in the exercise of their rights and duties as participants in our democracy,” but is not a document to tell people who to vote for.

“In this statement, we bishops do not intend to tell Catholics for whom or against whom to vote. Our purpose is to help Catholics form their consciences in accordance with God's truth. We recognize that the responsibility to make choices in political life rests with each individual in light of a properly formed conscience, and that participation goes well beyond casting a vote in a particular election,” says the USCCB document.

Arroyo asked Müller if he thought if most Catholics had a “properly formed conscience” especially considering its an election year.

Müller responded by saying that Catholics always “have a right” to vote for whom they choose, but that as a “Christian and as a Catholic” they should always vote for life.

“All the voters have the right to vote for those candidates they want to vote for them but as a Christian and as a Catholic you need some criteria for the election, and the bishops don't indicate you must vote for them or for them,” Müller told Arroyo.

“But they (the bishops) give us Magisterium, give us some criteria. The doctrine of the Church is the moral doctrine and the social doctrine and we have to look for candidates who are in favor of life, this is the basis.”

The USCCB’s Forming Consciences document states in regards to abortion that: “The threat of abortion remains our preeminent priority because it directly attacks life itself,4 because it takes place within the sanctuary of the family, and because of the number of lives destroyed. At the same time, we cannot dismiss or ignore other serious threats to human life and dignity such as racism, the environmental crisis, poverty and the death penalty.”

Arroyo asked Müller if abortion should hold the most prominent issue above other moral issues, referring to the USCCB Forming Consciences document which states that “abortion remains our preeminent priority.”

Müller responded by saying that if you “deny the life of the people” then all other issues have no “reality.”

The right to life is the “basis” for all other rights, he said, adding that God created everybody according to his image and likeness.”

“Therefore, life is the basis, all the other values have no bases no reality — social justice and equality for everybody — if you deny the life of the people.”

Müller also told Arroyo that it is “impossible” for other life issues such as the death penalty to be compared to the evil of abortion and that if one is a Catholic they can only be “pro-life.”

“Judging a person, only God can do. But we don’t judge persons. We do judge about some attitudes and the thinking and if you are Catholic you can only be pro-life, for life,” Müller told Arroyo.

“To be Catholic to be a Christian is believing in God, the creator of everybody. You cannot say ‘I am Catholic, I’m a Christian, I believe in God but I accepted the legislation which includes the possible killing of people in the mother’s womb and outside the mother's womb.’ That is absolutely clear.”

Müller also told Arroyo that claims that Trump is a “racist” is “absolutely wrong.”

“I don’t think that Trump is in favor of racism. It’s an attribution that I think is absolutely wrong. I cannot imagine that a person with a conscience can be a racist. It’s impossible because we all are created by God and therefore racism is absurd,” Müller told Arroyo.