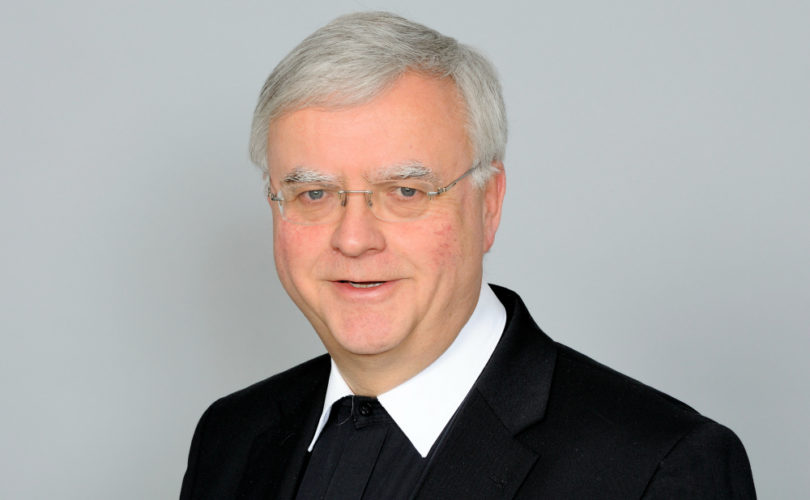 BERLIN, June 9, 2015 (LifeSiteNews) — On Monday, June 8, Pope Francis appointed Bishop Heiner Koch of Dresden-Meißen to be the new Archbishop of Berlin, a diocese that constitutes an important position within the Catholic Church in Germany. Bishop Koch had previously been selected as one of the three delegates of the German Bishops' Conference to participate in the upcoming October 2015 Synod of Bishops on the Family. Koch is President of the German Bishops' Conference's Commission for Marriage and the Family.

He had also been a participant at the recent May 25 private Rome conference at the Gregorian University that caused controversy over its heterodox contents and its intentional lack of transparency. As earlier reported, one of the other participants of this private Meeting, Professor Eberhard Schockenhoff, has just recently also publicly defended practicing homosexuals.

Bishop Koch is already known for his liberalizing tendencies and sympathies toward homosexual couples, as well as toward “remarried” divorcees. As the German Catholic newspaper, Die Tagespost, reported June 8, for example, Bishop Koch recently said the following: “Any bond that strengthens and holds people is in my eyes good; that applies also to same-sex relationships.”

In February 2015, Koch made comments to the German newspaper Nordwest-Zeitung (Oldenburg) that reveal more deeply his own views.  He claimed that the Church needed a new language when dealing with homosexuals. “To present homosexuality as sin is wounding,” Koch said. And he continued: “I know homosexual pairs that live values such as reliability and responsibility in an exemplary way.”

Concerning “remarried” divorcees, Bishop Koch told the Nordwest-Zeitung: “The question is whether we can – under certain conditions – admit to the Eucharist divorced and remarried faithful who have a deep piety.” And he continued: “This could, for example, take place after a long conversation with the confessor.”

This appointment of Bishop Koch by Pope Francis comes shortly after Cardinal Walter Kasper – the main promoter of the liberalizing agenda at the last Synod of Bishops on the Family –  had somewhat stammeringly withdrawn his previously made explicit statements that Pope Francis had himself supported his reform proposal. In an interview with EWTN News Director Raymond Arroyo, host of the The World Over, on June 4 while visiting the United States, Cardinal Kasper said ambiguously and hesitatingly: “The Pope wanted that I put the question [forward], and, afterwards, in a general way, before all the cardinals, he expressed his satisfaction with my talk. But not the end, not in the .… I wouldn’t say he approved the proposal, no, no, no.”

For an insufficiently informed observer, such equivocation only adds to the confusion about the pope's actual intentions and encouragements – as well as about his procedural methods and approved episcopal appointments, such as Archbishop Heiner Koch now.