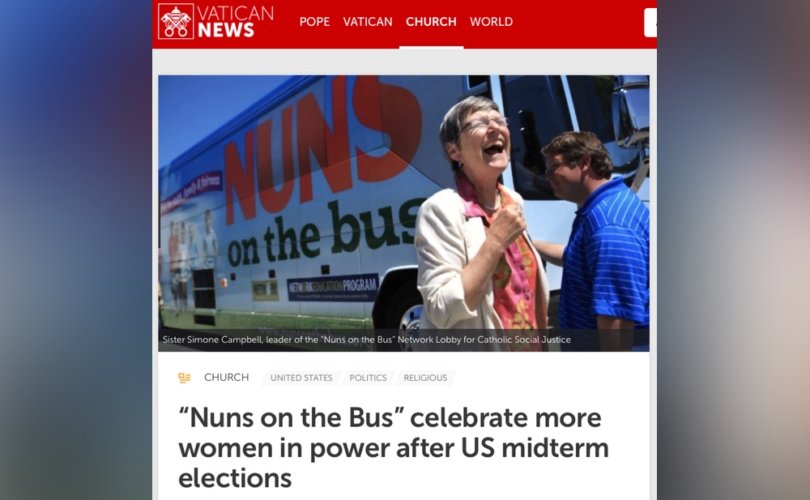 VATICAN CITY, November 12, 2018 (LifeSiteNews) – The Vatican’s news website has showcased an interview with a pro-abortion religious sister in its coverage of the recent U.S. elections.

Sister Bernadette Reis of Vatican News Service interviewed Sister Simone Campbell, leader of the left-wing “Nuns on the Bus”, about the election of over 100 women to the House of Representatives. The interview appeared November 8 on the vaticannews.va website.  Vatican News describes itself on its website as the “information system of the Holy See.”

Campbell, 73, has stated publicly that she believes abortion should remain legal, which both contradicts Church teaching and renders her a problematic subject for a  Vatican News Service interview in which she is portrayed favorably.

“Nuns on the Bus” is sponsored by NETWORK, a Catholic social justice lobby group of which Campbell is the executive director. According to the New York Times, “Nuns on the Bus” was founded as a “rebuke” to Pope Benedict XVI and the Congregation of the Doctrine of the Faith (CDF) after the latter criticized both the radically feminist Leadership Conference of Women Religious (LCWR) and NETWORK itself.

A three-year investigation into the LCWR was stopped by Pope Francis in 2015.

The group travels through the United States on a bus to bring attention to various social justice causes. Its most recent tour, called “On the Road to Mar-a-Lago”, included 54 events in 21 states over the course of 27 days.

In the interview, Campbell voiced satisfaction that over 100 women have been elected to the U.S. House of Representatives. Without mentioning any policies these women stood for, Campbell celebrated their sex, color, adherence to Islam, and choice of professions.

“I’m really very excited,” Campbell said. “We follow at the federal level, so I’m most aware of the members of Congress, and that in our House of Representatives there’s going to be over 100 women, which is a historic high. And that’s from both parties, Democrat and Republican.”

Campbell observed that 40% of these female representatives are “women of color”, and that two of them are Muslims “which is also exciting.”

“But the other piece that really stirs us is that there’s a wide variety of women in Congress, including teachers, small business owners, women who have been involved in women’s rights issues but also some lawyers who come from a family law perspective,” she said.

“I think we helped,” she said. “We did 12 lobby visits while we did our big bus trip, and of the 12, 8 members of Congress were defeated.”

Campbell suggested that this meant they had been replaced by people more interested in the needs of the family, healthcare, and a better tax policy.

The Vatican’s reporter expressed her satisfaction with the apparent influence of  “Nuns on the Bus” on the American elections.

“I think that this very positive outcome can only be an encouragement for the future,” Reis told Campbell. “I [was] very grateful when I saw the tour starting again.”

Campbell has not hidden her pro-abortion talking points.

In a 2016 interview with Amy Goodman of Democracy Now!, Campbell said that some who claim to be pro-life are “really only pro-birth.”

“And I think the shock of our nation is that … some claim to be pro-life, but they’re really only pro-birth. They don’t do what’s necessary to support women in carrying a baby to term, in providing paid child—paid family leave, in providing maternity leave or, you know, parental leave, providing reasonable-cost child care. I mean, the litany goes on and on,” she continued.

“If we were really serious about being pro-life, we wouldn’t look just at birth. From my perspective, I don’t think it’s a good policy to outlaw abortion. I think, rather, let’s focus on economic development for women and economic opportunity. That’s what really makes the change.”

Campbell has also strongly suggested that some women in the USA have to have abortions so as to be able to feed their other children.

“The challenge is, for women striving to care for their families, the urgent necessity of being able to feed children means that you’re going to make tough choices sometimes,” she said.

“I don’t think it’s a good choice. I think our society is failing our families. And that’s what we have to work on.”