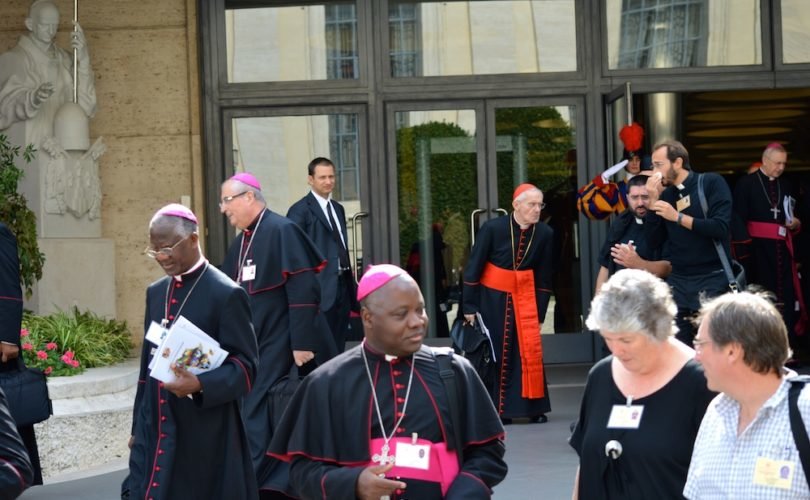 ROME, June 23, 2015 (LifeSiteNews) — The preparatory document, called the Instrumentum Laboris, for October’s long-expected Synod on the Family was released today.  The 20,000-word document is broken up into three sections that will be covered in succession during the three weeks of the October 4-25 meeting of the world’s bishops in Rome. And from the topics presented, this coming Ordinary Synod is expected to be as explosive as the Extraordinary Synod of October 2014.

The language in the document seems schizophrenic with some solid Church teaching and then vaguely-worded statements skirting open confrontation with Church teaching.  The text thus follows the proposal of Cardinal Kasper who in his EWTN interview said that due to the disagreements among Church leaders, the final document should be a compromise acceptable to all.

Reminiscent of the proposals from the 2014 Synod that spoke of eliminating terms such as “intrinsically disordered” when referring to homosexuality, the Instrumentum Laboris says, “It is necessary to adopt a clear and inviting communication that is open and not moralizing, judging or controlling.” It says language should “bear witness to the moral teaching of the church, while at the same time remaining sensitive to the situation of each individual” (78).

While the document does not mention contraception at all, it does speak of “the need to respect the dignity of the person in the moral evaluation of the methods of birth regulation” (58).

Despite the rejection of paragraphs from the final document of the Extraordinary Synod concerning homosexuality, the Instrumentum Laboris calls on pastors to include in their pastoral plans care for families with homosexual persons within them (130-132). The section speaks of accepting those with a homosexual orientation “with sensitivity and delicacy both in the Church and in society.”

At the press conference on the release this morning, Cardinal Lorenzo Baldisseri, general secretary of the Synod of Bishops, said the first part, entitled “Listening to the challenges of the family,” would tackle among other things, “the role of women, emotional life and education in sexuality, and bioethics.”

The third part, devoted to “The mission of the family today,” will address the controversial Kasper proposal concerning communion for remarried Catholic divorcees.  Cardinal Baldisseri said it makes reference to “the streamlining of procedures for causes for annulment, the integration of faithful in irregular situations, the eventual introduction of a penitential route.”

There is no English language document available to date.

Despite criticism of a lack of transparency with the first Synod, the decision to refuse to make public the names of those Synod Fathers who make statements at the synod will be retained.  They will however be free to communicate with the media at their discretion.