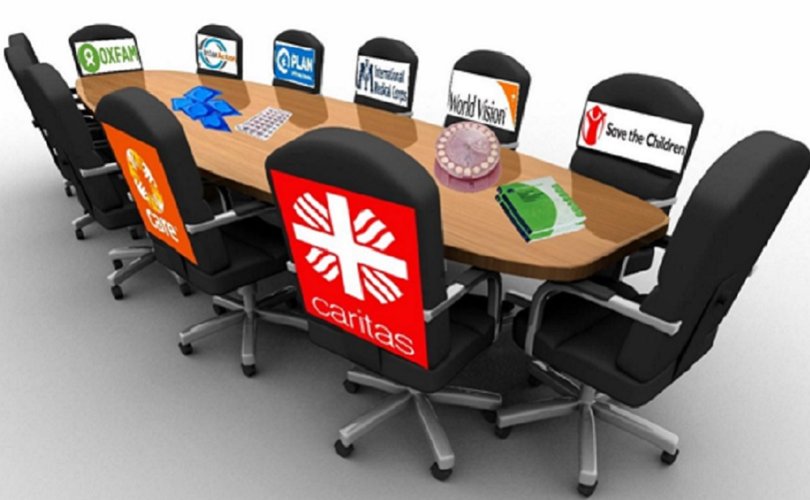 March 19, 2018 (Lepanto Institute) – Caritas Internationalis, which is the Vatican-run confederation of Catholic international aid and development agencies, is on the board of directors of The Sphere Project, whose central purpose is to promote a standard handbook for aid and development work. The handbook strongly advocates for the use of contraception, including so-called “emergency” contraceptives for victims of rape.

The Sphere Project says that it is:

The Sphere Handbook, Humanitarian Charter and Minimum Standards in Humanitarian Response, is one of the most widely known and internationally recognized sets of common principles and universal minimum standards in life-saving areas of humanitarian response.

Listed among some of the more notorious pro-abortion and pro-contraception international aid agencies (like CARE, InterAction, International Medical Corps, Oxfam, Plan International, Save the Children and World Vision) Caritas Internationalis is a member of the Board of Directors.

In 1997, a small group of international aid and development agencies, including Caritas Internationalis, developed a set of minimum standards in core areas of humanitarian assistance. The primary outcome of the project was the publication of the handbook Humanitarian Charter and Minimum Standards in Disaster Response. From the earliest iterations of this handbook, it has always promoted the use of contraception and condoms. Although there is a note in each edition which indicates that Caritas Internationalis and its member organizations do not support those sections of the handbook which promote contraception, the fact that Caritas promotes the handbook and remains on the governing body of the Sphere Project makes the note completely disingenuous.

Staff and field partners should know how to refer women, men and children seeking redress for human rights violations, and be familiar with procedures for referring survivors of rape and sexual violence for counselling, medical or contraceptive care.

Page 283 states clearly that access to condoms and instruction on condom use is “essential” in disaster relief.

All individuals, including those living in disaster-affected areas, have the right to reproductive health (RH). To exercise this right, affected populations must have access to comprehensive RH information and services to make free and informed choices.

In support of this, the following three pages provide details on what this entails.

Page 326 not only states that contraception should be readily available, but that “comprehensive reproductive health services” (which include contraception) should be “integrated” into primary healthcare:

Page 327 explicitly calls for the provision of abortifacient emergency contraception for survivors of sexual violence:

And, on page 328, under a section titled “Essential health services – sexual and reproductive health standard 2: HIV and AIDS,” the Handbook establishes a “minimum set” of services and products during disasters. Included in this set are male and female condoms and “contraceptives”:

As with the previous edition, one page contains a footnote, which amounts to an empty gesture, stating that “Caritas Internationalis and its Members do not promote the use of, or distribute any form of, artificial birth control.”

In 2012, two members of Caritas Internationalis (Trocaire and Catholic Relief Services) funded a “trainer of trainers” (ToT) workshop intended bring Sphere Trainers up to date on the new 2011 edition. In the image from the front cover of CRS's report on this workshop, you can clearly see CRS's banner, Trocaire's banner, and a host of trainers holding the 2011 edition of the handbook, which we just profiled.

Currently, CRS is working with several other organizations on revisions for the 2018 edition of the Sphere handbook.

Now with the new Sphere handbook, our next challenge will be to make sure that people within all the Caritas member organisations are trained and aware of the new standards.

This is just one more reason why it is so important for Catholic aid and development agencies to disentangle themselves from secular organizations that include contraception and abortion in their work. In a case such as this, it isn't enough for Catholic agencies to claim in a footnote that they aren't involved in the promotion or distribution of contraception when they not only had a hand in the creation of a handbook promoting such things, but also are involved in the promotion of the handbook itself. If Caritas Internationalis, Catholic Relief Services, and other Catholic aid organizations truly want to win back the trust and support of pew-sitting Catholics, they are going to have to make some hard decisions, beginning with ending their relationships with the enemies of Christ, children, and souls.