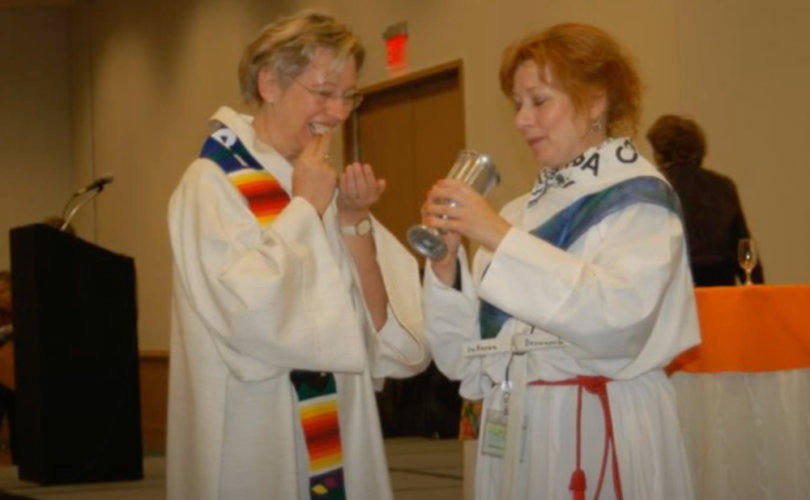 VATICAN CITY (LifeSiteNews) — The Vatican has included a group pushing for the ordination of women among the resources for the ongoing multi-year Synod on Synodality, despite the issue of female ordination having already been firmly prohibited by the Church.

The Women’s Ordination Conference (WOC) announced January 19 that its “Synodal effort and Toolkit for Ordination Justice Advocates, is now listed on the Vatican’s official #synod resources site,” in response to the Pope’s synodal order to listen “especially [to] those on the periphery who are often excluded and forgotten.”

The Synod Resource website, managed by the General Secretariat of the Synod of Bishops, includes the page of resources provided by WOC, along with links back to the WOC website and various ways to share the page. The WOC calls for a “rebirth” of the Church to include women as ordained members of the clergy, “priests, deacons, and bishops.”

WOC’s executive director told the Associated Press that “the integrity and impact of the synod will depend on the inclusion of courageous conversations about women’s equality.”

LifeSiteNews contacted the Secretariat for further comment, and was simply re-told the Synodal Resource site’s welcome message: “[T]he publication of any contribution should not be understood as an endorsement of its content; nor should anyone interpret such a publication as an act of formal recognition by the General Secretariat of the Synod of Bishops of the group or community submitting the contribution.”

In comments given to the National Catholic Register, the Secretariat’s communication manager Thierry Bonaventura said the Synod Resource site was not promoting WOC.

“I would rather speak of ‘sharing,’ as the title of the website,” he said, adding how the website “aims to be horizontal communication.”

What is the Women’s Ordination Conference?

In a description of the group found on WOC’s site — more accurate than that on the Synod Resource site — the WOC is called the “oldest and largest organization working to ordain women as priests, deacons, and bishops into an inclusive and accountable Roman Catholic Church. A feminist voice for women in the Roman Catholic Church, WOC is a grassroots-driven movement that promotes activism, dialogue, and prayerful witness to call for women’s full equality in the Church.”

“A renewed priesthood will rebirth the church and transform unjust structures in the world community,” claims the group, which also condemns the Church for defining particular roles as “male or female.”

The long-term goals of the group include reforming the “governance” of the Church to be “inclusive,” along with incorporating “feminist, womanist, mujerista, and other liberating spiritualities into every-day Catholicism.”

The organization describes the Church teaching of a male-only priesthood, which was taught by Christ, as a “heresy.”

WOC’s advisory board — whose members all include their pronouns in their bios — includes Sr. Jeannine Gramick, whose anti-Catholic pro-LGBT work has been historically condemned by the Church, but recently praised by Pope Francis.

Gramick’s group – New Ways Ministry – is also listed on the Synod Resource site, after a controversy which saw the Vatican originally remove the link, before putting it back up and apologizing.

Despite the group’s desired goals, the Catholic Church has already clearly prohibited female ordination. In his 1994 Apostolic Letter Ordinatio Sacerdotalis, Pope John Paul II firmly stated that the Church has “no authority whatsoever to confer priestly ordination on women.”

Such a prohibition was in no way to mean that “women are of lesser dignity, nor can it be construed as discrimination against them,” continued the pontiff.

Such a letter decided the issue “in a binding manner and for the entire Church,” declared Cologne’s Cardinal Rainer Maria Woelki in 2019.

He was supported by Cardinal Gerhard Müller, the former Prefect of the Congregation for the Doctrine of the Faith, who ruled out any deviation from the clear pronouncement made by John Paul II.

“It is certainly without doubt, however, that this definitive decision from Pope John Paul II is indeed a dogma of the Faith of the Catholic Church and that this was of course the case already before this Pope defined this truth as contained in Revelation in the year 1994.”

But catechist and author Deacon Nick Donnelly condemned the Vatican’s link to the group as a “scandal.”

The Spectator’s Damian Thompson warned that the move suggested a rejection of John Paul II’s teaching, as only “Progressives [are] welcome to stay Catholic.”