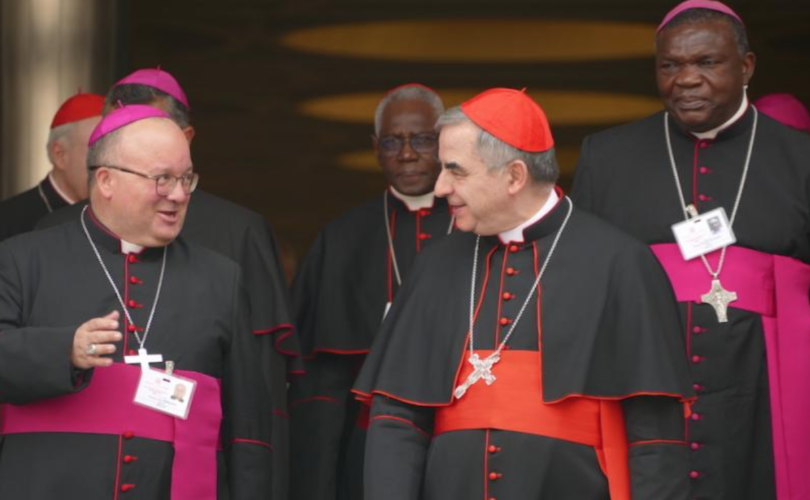 ROME, October 18, 2018 (LifeSiteNews) — The organizers of the Youth Synod currently underway in Rome have decided not to release the names of members of the small language groups, the Vatican announced today. While some see the move as fostering greater freedom to speak in the synod hall, it is leading others to question the transparency of synod organizers.

At a press briefing on Wednesday, Paolo Ruffini, Prefect of the Secretariat for Communications, told LifeSite that the names of small group members “will not be made public.” Ruffini said synod organizers have decided to withhold the names “not in order to hide” something, but rather to “manifest” the “discernment” at work in the synod.

“The Church is a body, united in the Spirit,” Ruffini said. Not releasing the lists of the small groups is therefore about manifesting “the communion of the Church, the Mystical Body,” rather than seeing the synod as a “parliament.”

“It’s a reason that [any] believer should understand,” he added.

“The reason for which the lists of participants in the small groups is not being given out is to seek to show forth the spirit of the synod, which is a spirit of communion. The small groups express to us, in a manner of communion and collegiality, the will of the Synod Secretariat to not transform the synod into a debate about ‘who said what’ but to tell it for what it is: a communal reflection of the Church. This is the reason why the names of the individual participants of the small groups have not been given.”

Pressed by Magister on the apparent “inconsistency” of not releasing the names, as synod organizers had done at the 2015 Family Synod, Ruffini replied, “Every synod has its rules,” and added that he would pass on the suggestion.

From small groups to the final document

Many readers may be unfamiliar with how the Vatican Youth Synod works, what role the small circles have within the wider whole, and why not releasing the names raises concerns among some observers.

The Oct. 3-28 meeting is divided into three major parts, with one week dedicated to discussion of each of the three parts of the synod’s working document (Instrumentum laboris).

The synod assembly first convenes in what are called “general congregations.” During these congregations, Synod Fathers and other participants — including auditors, experts, fraternal delegates from other Christian faith communities, and special delegates — deliver 4-minute interventions on the floor of the synod. During the general congregations, there is also a time for free exchange between members on topics under discussion (Episcopalis Communio, art. 15, 2).

According to a new Instruction on the celebration of the synodal assemblies, issued Oct. 1, the general secretariat of the synod is responsible for “constituting the small groups” (art. 8,4). The instruction specifies that “individual Synod Fathers participate in the group assigned to them” (art. 30, § 2).

The purpose of the small group discussions is to bring about a general consensus, or at least the widest possible consensus, on the assigned topics. This consensus is expressed in modi, or proposals, which include to be included in the final document. However, according to synod rules, “any opposing or different opinions must always be taken into account” (Instruction, art. 30, § 4).

The moderator announces the topic, guides discussion, sees that discussion doesn’t stray from the topic at hand, promotes active participation of the members, decides what topics should be given priority when time is limited, and determines how much time should be given for interventions (Instruction, art. 31, § 2).

The rapporteur is responsible for summarizing the opinions expressed at the end of each session, overseeing the formulation of modi that reflect the prevailing opinions of small group members, and preparing a report containing all opinions expressed. (Instruction, art. 31, § 3).

The rapporteurs for each small group then read their report in the general congregation. Synod Fathers are then permitted to make additions, amendments or explanations regarding the content of the reports (Instruction, art. 32, § 4, §5).

According to the new Instruction, the general rapporteur — with the help of the special secretary and other prelates on the 12-member drafting commission — “takes into account the modi presented” and prepares the text of the final document” (Instruction, art. 35, § 1). The draft is approved by an absolute majority (Instruction, art. 33, § 2).

No time to translate?

In a press briefing on Tuesday, Mr. Ruffini explained that, once the draft of the final document is completed, the Synod Fathers will be given a hard copy of a “provisional text,” which will also be read on synod floor with simultaneous translation.

The synod fathers will then have an opportunity for discussion and debate, and may “​present the General Secretariat with modi to the draft of the final document that they deem necessary” (Instruction, art. 34, § 3).

The drafting commission then has about one day to amend the document before it is given to the Synod Fathers for a final vote.

Ruffini said the final document will be given to bishops only in Italian, because “there’s no time to translate it.” The final text will be read aloud in Italian on the synod floor, with simultaneous translation, and then after a few hours, the Synod Fathers will vote on the document “paragraph by paragraph.”

The lack of proper translations has provoked a certain unease among bishops in the past. During the 2015 Synod on the Family, as is generally the case, not all of the bishops knew Italian and so had greater difficulty deciding whether to approve a particular point or not.

These concerns are now heightened by the fact that, according to a new Apostolic Constitution issued in September, the final document, if approved by the Pope, “participates in the Ordinary Magisterium of the Successor of Peter” (Episcopalis Communio, art. 18).

What’s in a name?

Given the role the small groups play in the final document and increasing calls for transparency from the hierarchy, some observers are concerned about the lack of transparency.

The issue initially came up at Tuesday’s press briefing, with veteran Vatican journalist Sandro Magister pointing out to Ruffini that the lists of the small language groups were given to journalists at the Synod on the Family in 2015. At the time, in fact, photos and videos of the small groups were widely circulated online by the Vatican and other news agencies.

“The names are important, because the [small group] reports are very different from one another,” Magister told the head of the Vatican’s Secretariat for Communications.

But as one source close to the Vatican explained, some believe one ought to look at the synod with a more “benevolent” attitude. The fact that synod organizers are not releasing the names, he said, allows “freedom to speak” and an atmosphere where bishops “don’t have to worry about what they are saying and who is saying what.” Releasing the names of small group members, the source added, “stifles free discussion and brainstorming.”

However, others argue against this, saying that “a bishop shouldn’t have anything to hide” and that synod organizers ought to release the names “in the interest of openness and transparency.”

Regardless of whether synod organizers intend to release the names of the small language groups, the names are getting out.

In an article on Tuesday, Edward Pentin of the National Catholic Register reported that English Group B, moderated by Cardinal Blase Cupich of Chicago, also includes Archbishop Peter Comensoli of Melbourne, Australia (and one of 12 members of drafting commission for the final document), and Jesuit Father Michael Czerny, undersecretary for the Vatican’s office on Migrants and Refugees.

English Group D, moderated by Cardinal Daniel DiNardo, president of the U.S. Conference of Catholic Bishops, include Archbishop Charles Scicluna of Malta and Bishop Robert Barron, auxiliary of Los Angeles, who was elected as group’s rapporteur and whose name was therefore already known.

The full texts of the small group reports on Part II of the Instrumentum laboris can be read here.