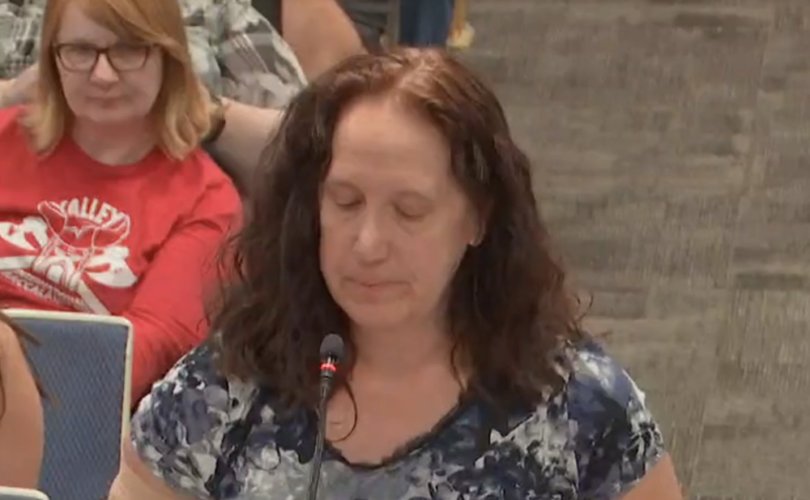 LAS VEGAS (LifeSiteNews) – “Profane” sexual language is acceptable for student reading but not for open meetings among adults, alleges a viral video from the Clark County School District.

The video depicts a mother, Kandra Evans, tearfully alleging to the board that her 15-year-old daughter was required to “memorize” and “act out” in “front of her entire class” a passage in which a female character confessing her lesbianism to her boyfriend says, “I don’t love you. It’s not you, it’s just I don’t like your d*** or any d*** in that case. I cheated Joe.”

The mother prefaced her remarks with a warning that it would “be horrifying for me to read to you but that will give you perspective on how she must have felt,” but was interrupted by a school board member who told her, “we are not using profanity.”

A mom in @ClarkCountySch reads from a graphic assignment her daughter was required to do. Her mic then gets cut off because it’s inappropriate for a public discussion.

Adults can’t handle hearing this content yet they readily give it to kids in school. How does it make sense? pic.twitter.com/GFP1bGhNlg

Newsweek reported that another video (starting at 16:50) subsequently released shows the mother being granted her full allotted time to speak afterward, but the admonishment illustrates the apparent incongruity between the standards of the school board and the alleged standards of at least one of the district’s high-school teachers.

The district later said it was investigating the situation, but without clearly confirming or denying anything it insinuated it involved a “class assignment consisting of a student-generated writing exercise that produced content not conducive to student instruction.”

The District does not comment on individual employee or personnel issues, and all policies and procedures are being followed.

However, 360 News Las Vegas reported that this is not the first situation of its kind in Clark County or the most egregious.

“Disney is, we’re finding out, super creepy and weird. California allows you to have sex with kids as long as there’s a 10-year or less age difference, that that’s where we’re taking our kids?” parent Stephanie Kinsley said in April as part of remarks that subsequently got her banned from attending future meetings. “With our, our sexually-confused teachers who don’t have children of their own?”

“The speaker prior to Kinsley had a graphic lesbian message on her T shirt and was allowed to speak without any such interruption,” 360 News added.