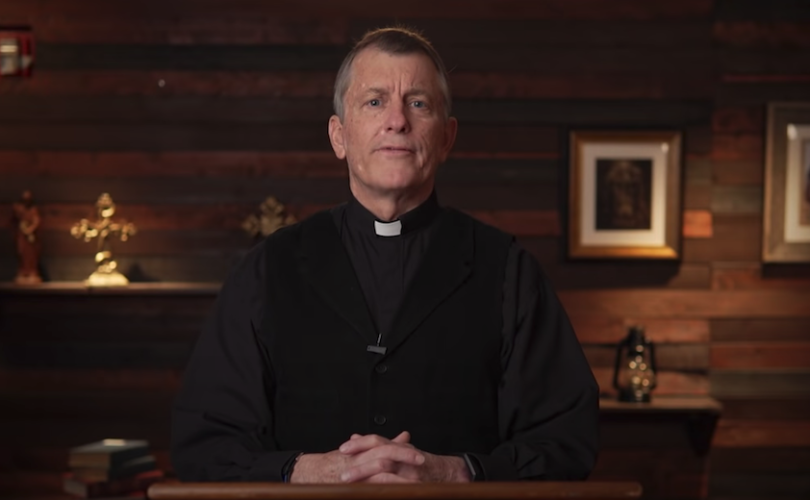 SPRINGFIELD, Vermont (LifeSiteNews) – A Vermont priest is fighting his diocese over an attempt to remove him from his parish for refusing to take an abortion-tainted COVID-19 jab or submit to mask and testing requirements.

Father Peter Williams has served as pastor of Holy Family parish in the Diocese of Burlington, Vermont for nearly 20 years. But in a video earlier this month, he revealed that his bishop is now trying to suspend him because of his resistance to punitive COVID restrictions for unvaccinated clergy.

In a September letter, pro-LGBT, dissident Bishop Christopher Coyne declared that priests who reject COVID-19 vaccination must wear a mask during all celebrations of the Sacraments and any interactions with individuals as part of their pastoral ministry. Un-jabbed clergy must also be tested for coronavirus every other week, the bishop decreed, warning priests that “choosing not to be vaccinated, as with all choices in life, has ramifications.”

“I rely on the honor system completely for this and your promise of obedience to me as your bishop in this matter,” Coyne said.

Fr. Williams is not vaccinated and has refused to obey the mask and testing rules, stating in his January 5 video that he objected to Coyne “directing matters of my health.”

“Being more of the ilk of a patriot and being one who is in support of freedom and personal rights, I balk at any incursion into my rights as a human being, certainly a U.S. citizen, and that was my objection when the bishop started directing matters of my health,” the priest said.

“Because he made it a matter of honor and obedience, I quickly responded to him saying that I would not,” he explained. “He got back to me and said that I had 14 days to comply or he would suspend me.” Coyne additionally asked him to resign as pastor of Holy Family parish.

“And he cited a canon in canon law that had all the penalties, from being suspended, to being dismissed as a priest, and even excommunicated,” noted Fr. Williams, who has hired a canon lawyer and is challenging the diocese to remain at his parish.

“I have no intention of resigning as pastor because that is my job, that is what I do, and according to canon law, I have rights as a pastor to retain my position until the bishop removes me, and that would be according to a whole canonical process,” he said. “And so, I have instructed my lawyer that we would follow through to the end of that process.”

‘A great burden to carry’

Fr. Williams said Coyne and the diocesan vicar general are advancing a case that the pastor is “seriously ill” and that has “severely impacted” his mental faculties.

The priest, 61, strongly refutes those claims. “Needless to say,” he said, “now the case seems to be revolving around my health,” which he described as “very good.”

Fr. Williams added that he initially tried to avoid mentioning the legal battle with the diocese to his parishioners.

“One of the things that I realized over time is that that’s a great burden to carry when you always know that the bishop and the forces in the diocese are trying to have you removed as a pastor while you’re carrying out your pastoral duties,” he said, however.

At his lawyer’s suggestion, the pastor is now asking members of his parish to send letters testifying on his behalf and about his health.

“If you are inspired or if you are interested to write a letter on my behalf stating how you think I’m doing as a pastor and how you would evaluate my mental health these letters will be collected at St. Mary’s here.”

Fr. Williams has already received an outpouring of support online. “Thank you for taking a strong stand Fr. Peter Williams,” wrote one YouTube commenter. “You really are defending all of us by defending yourself.”

“No bishop should tell a priest about how he should handle his own medical needs,” wrote another. “In addition, no bishop should force their priests or parishioners to do something against their conscience – all of this is a violation of what the Catholic Catechism teaches.”

The Diocese of Burlington responded to Fr. Williams’ video in a statement last week. “The present pastoral situation in Springfield is a sad and difficult situation that Bishop Coyne is addressing with care for all concerned,” the statement read. “In order to protect the good name and reputation of all involved, he does not choose to speak to the content of the video.”

“The No. 1 priority of the Diocese of Burlington is to offer the sacraments and the fullness of parish life to the Catholic community in a safe environment that protects the health and well-being of our priests and parishioners.”

No COVID-19 vaccine stops the spread of the virus, and recent data has shown that “fully vaccinated” people actually have higher rates of infection than the unvaccinated, particularly with the omicron variant. Studies have similarly discredited the effectiveness of mask mandates at reducing viral transmission.

Vaccinated people have also come to dominate COVID deaths and hospitalizations in several countries, including the U.K. and Denmark, while the jabs have been linked an unprecedented surge in vaccine injury reports.

And all COVID shots available in the United States have been tested on or produced with cells of aborted babies, sparking outrage among many Catholics whose convictions prohibit them from any complicity in abortion.

Various Church leaders have stressed that the injections must remain voluntary and have acknowledged that Catholics can refuse vaccination in good conscience. As the bishops of Colorado noted in an August 2021 letter, “there is no Church law or rule that obligates a Catholic to receive a vaccine — including COVID-19 vaccines.”

Despite priests’ conscience objections, the dangers of the vaccines, and the failure of the jabs to contain the virus, a handful of pro-LGBT, dissident prelates have joined Bishop Coyne in requiring vaccination or masking for clergy, including Lexington Bishop John Stowe and Chicago Cardinal Blase Cupich.

Coyne, appointed by Pope Francis in 2015, has a history of dissidence on core Catholic teaching regarding human sexuality and the family.

In an interview days after his installation, Coyne described the gender confusion of so-called “transgender” people as “biological” and “who they are.” “So there’s no fault to be made, actually” he said. Coyne further suggested that a homosexual may not be “a bad person or a bad Catholic” for being in a same-sex “marriage.”

The bishop later accepted to speak at a pro-LGBT conference hosted by heretic and dissident Fr. James Martin SJ, and last year signed a letter urging the USCCB to halt discussions about denying Holy Communion to pro-abortion lawmakers.

The Church has always condemned homosexuality as intrinsically evil and disordered and similarly rejects transgenderism. The Vatican has denounced LGBT “gender identities” as based on “nothing more than a confused concept of freedom in the realm of feelings and wants.”