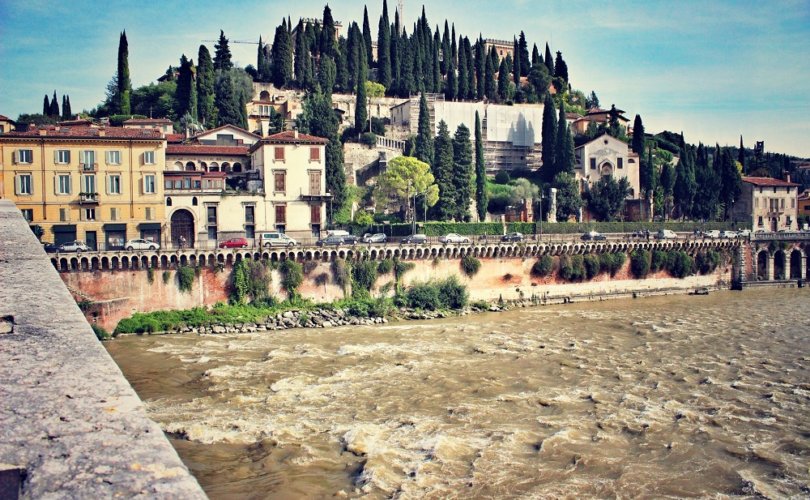 October 8, 2018 (Society for the Protection of Unborn Children) – Verona has long been immortalised as the city of love. Now, it could be known as the city of life, after councillors passed a motion declaring the North Italian city officially pro-life.

Councillors approved “an initiative to prevent abortion and promote motherhood”, put forward by Alberto Zelger, a member of the League party.The motion had three aims; to declare Verona a “city in favour of life”, to finance local pro-life projects, and to promote a regional project that allows pregnant women to anonymously give up their babies for adoption.

Despite protests from women's rights groups dressed as “handmaids”, the motion passed by 21 votes to six. As well as members of the League party, it was backed by Mayor Federico Sboarina, and by the leader of the centre-left Democratic party, Carla Padovani.

Mr Zelger put motion 434 forward earlier this year to coincide with the 40th anniversary of Italy's abortion law. It contains strong pro-life statements, with point two reading that the committee “acknowledges that the life of every person from conception until natural death should be welcomed and protected in all its aspects”.

It is sharply critical of the abortion law, which, it says, was intended for exceptional cases and to prevent backstreet abortions, but in reality has “contributed to the use of abortion as a mode of contraception”. The law should inform women of alternatives to abortion, (adoption, economic help, psychological assistance, job support), it continues, but that seldom happens.

Because “sometimes just a little economic aid or the prospect of a job is enough to give a woman in difficulty the peace of mind needed to look after her child”, the motion calls for funding for pro-life organisations to be written into Verona's budget, specifying Project Gemma, a perinatal adoption service, and a project of the Diocesan pro-life centre.

In Italy, just over 70 percent of gynaecologists refuse to carry out abortions, according to health ministry data from 2016.

Perhaps the City of Love is an example of how all parties can come together to give practical help to women and build a Culture of Life at a local level.