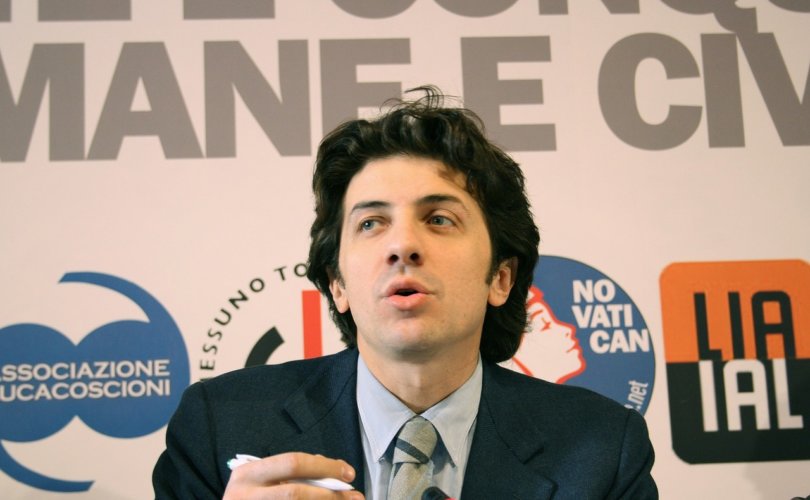 ROME, September 27, 2019 (LifeSiteNews) ― Italy’s top court has set a precedent that may lead to overturning the country’s laws against assisted suicide.

On September 25, Italy’s Constitutional Court handed down a decision that it is not always a crime to help someone commit suicide if he is being “kept alive by life support,” “is suffering from an irreversible pathology, a source of suffering that he considers intolerable” but is fully capable of making the free and conscious decision to end his life.

The court was considering the case of Marco Cappato, 48, a right-to-die activist and member of  Italy’s Radical Party who drove a blind, tetraplegic man who wished to die to Switzerland in 2017. Fabiano Antoniani, a music producer best known as “DJ Fabo,” had lost his sight and the use of his limbs in a car accident in 2014.

After being admitted to a Swiss clinic, Antoniani self-administered a lethal dose of pentobarbital by biting down on a button to activate the drug’s flow and died. He was 40 years old.

Wishing to bring attention to the right-to-die cause, Cappato then turned himself in to the police in Milan, who were obliged to charge him with assisting a suicide. When the case first reached the Constitutional Court, it postponed making a judgment. Instead, the Court asked the Italian Parliament to fill a “legislative vacuum” it perceived in the case. Parliament did not act, however, and thus after a delay of 11 months, the judges handed down their decision in favor of assisted suicide.

A conviction for assisting a suicide carried a prison term of five to 12 years in Italy.

Right-to-die advocates in Italy, most notably Cappato and the Luca Coscioni Association, which has argued in favor of euthanasia since 2002, are now hopeful that this decision will pave the way to medically-assisted suicide in Italy. The association is attempted to gain more public support by advertising the arrangement as “freedom to the end.”

Alex Schadenberg of the Euthanasia Prevention Coaltion told LifeSiteNews that the ruling is “very, very concerning.”

“It’s a far broader decision than the media would like you to think,” he said. “It’s very difficult to limit euthanasia to assisted suicide.”

Of particular concern for Schadenberg was the implication that a person might be able to demand assistance in suicide because of his or her psychological suffering. He cited the recent case in British Columbia of Alan Nichols, a man with a history of depression who was successful in committing suicide with medical help despite not being terminally ill.

The Italian Episcopal Conference responded swiftly to the ruling of the Constitutional Court by demanding quoting Pope Francis’ objections to assisted suicide and euthanasia.

“The temptation to use medicine to satisfy a sick person’s possible wish for death, caused also by legislative changes, by helping him commit suicide or by directly causting death with euthanasia should and must be rejected,” the pontiff had said.

“The Italian Bishops find themselves unanimous in repeating these words of Pope Francis,” they stated.

“In light of this they express their discomfort and their distance from that which has been communicated by the Constitutional Court,” they continued.

The bishops said their primary concern related to the “cultural thrust” that has led sick people to believe that asking to have their lives ended is a “choice of dignity.”

“The Bishops confirm and repeat the Church’s commitment of closeness and accompaniment for all the sick,” they said.

“They expect what is passed in parliament to recognize these values to the greatest possible degree as well as protecting the freedom of choice for health professionals.”