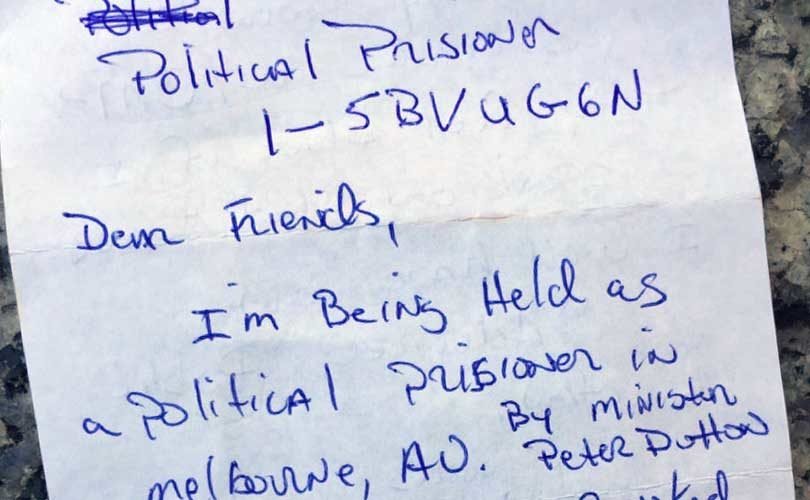 Note from prison from Troy Newman

MELBOURNE, October 2, 2015 (LifeSiteNews) – The embattled Troy Newman and his wife Melissa finally left Australia of their own accord, ending their 'trip of a lifetime' to Australia. They did so in advance of what would have been a restored deportation order after Troy and his hosts, Right to Life Australia, spent $20,000 attempting to challenge the governments revocation of his visa.

The underlying application which challenges the Minister's cancellation of the visa remains ongoing and is likely to be re-listed before the court for a date in November.

Speaking to LifeSiteNews on behalf of Right To Life Australia, secretary Mary Collier said “Obviously we're very disappointed with the decision.  Melissa had a lot of difficulty getting to even see her husband, even with the assistance of her lawyer.”

On Friday, Melissa Newman recounted her experience to LifeSiteNews.  “Well, we landed here in Australia.  My husband was detained at the airport and I haven't seen him until today.  He's been detained for three days by the Australian immigration department and I got to see him for 15 minutes.”

She was only successful in seeing her husband when her lawyer became involved in making arrangements.  Both Newman and Collier were emphatic in praising the efforts of their lawyers Clothier Anderson who acted on their behalf, with court action commenced in the early hours of the morning of Newman's arrival.

Having had his phone confiscated the whole time that he has been waiting in a cell, Newman was left frustrated and with no knowledge of what was happening.  During his short time with his wife and lawyer he even asked “What are you guys doing all day?  Get me out of here.”

He also said that the food was terrible, but that he was treated very well as the maximum security facility staff realised that he had not committed any crime.  It is understood that he only had the clothes that he was wearing when he was arrested.

Newman told his wife that the lack of knowledge of what was going on behind the scenes to secure his freedom was “one of the most frustrating things about being where he was at.”

Melissa Newman said “Troy risked a lot to come over here and share with Australia the importance of life – life at the very beginning.  And it was important enough for him to take whatever consequences that were going to be dealt.  We didn't know what was going to be, but if there was, he was willing to take the risk because he believes in life and he believes in the right to life movement here in Australia, and he wants to support it 100%.”

RTLA's Mary Collier said that Troy spoke with them and their legal team (from his cell) right after the outcome of the court case.  “The thing he wanted (us) to say is that he has no grudges against the Australian people and that he is very proud of the work that Right To Life Australia has done to try and secure his freedom; so that he can spread his message about the right to life of the unborn; and the ability of the pro-life movement to be able to express that message in Australia without restraint.”

RTLA still has to get documents ready by the end of October if they are to pursue the remaining challenge to the Minister's cancellation of the visa.  So far the High Court case has cost RTLA $20,000 AUD in addition to currently unknown costs of the government solicitors.

The remaining action is important as it relates to freedom of speech in Australia and making sure that a precedent is not set by these events.  “The barristers here are saying this is a very very important thing for your organisation to do because they'll (otherwise) be able to shut down and disallow any other speaker who comes to talk about a pro-life issue,” Collier explained.

Against the devastation to the best of their plans and the stress of the high stakes court challenge, there was some good news on the night prior to their departure.  Newman's wife was finally able to collect both his and her luggage from the airport.