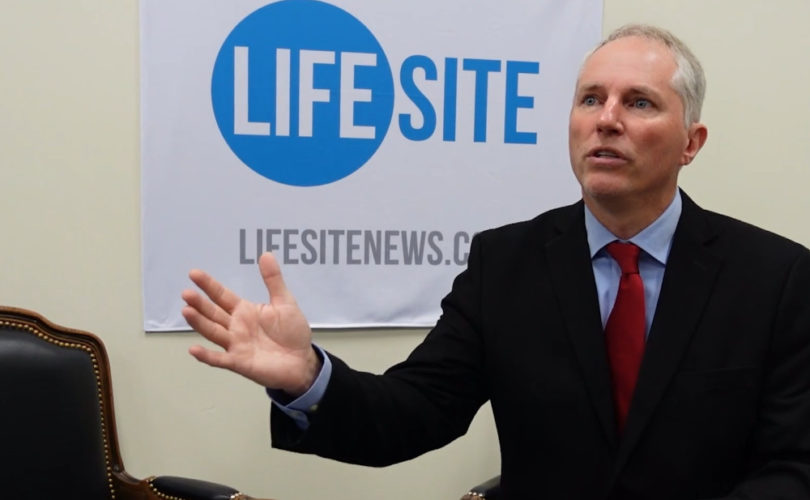 OKLAHOMA, April 21, 2021 (LifeSiteNews) — A veteran emergency room doctor is proposing a “silver bullet” treatment for COVID-19, suggesting that there has been a deliberate attack on promotion of the drug, despite an Oxford study showing it is 90% effective at reducing hospitalization in patients.

LifeSiteNews sat down with Dr. Richard Bartlett at the recent Health and Freedom Conference in Oklahoma, where he discussed the merits of budesonide.

Richard Bartlett, M.D., is a health professional with over 20 years of experience. Based in Texas, Bartlett gained first-hand experience in treating and curing COVID-19 in his role as an emergency room (ER) doctor.

Early on in the COVID-19 era, he was treating a woman who had “two forms of blood cancer” and was receiving radiation, while also being short of breath and “about to be put in the hospital on oxygen.” Bartlett said that after he treated her with budesonide, “her shortness of breath went away, her fever broke, and over the weekend she recovered,” so that she was able to teach her students for eight hours on Monday.

Upon such a discovery for treating the virus, Bartlett stated, “I couldn’t keep it quiet.”

While Bartlett and his newly recovered patient promoted budesonide, he was quickly censored by platforms such as YouTube.

He mentioned that Dr. Anthony Fauci, in a conversation with Mathew McConaughey, criticized the promotion of budesonide.

However, despite this attack from Fauci, Bartlett’s findings have since been supported by the STOIC study conducted by Oxford University in the U.K. The study found that “inhaled budesonide reduced the relative risk of requiring urgent care or hospitalisation by 90%.”

Oxford also discovered that budesonide brought about a “reduction in persistent symptoms” of the coronavirus in those who took the medicine.

This study contradicts Fauci’s testimony, noted Bartlett. “Is Anthony Fauci right, or is Oxford Uni right, that’s been around for 1,000 years, with a randomized controlled trial?”

“This is a medicine that’s so safe that it’s been used on two-pound preemie babies in the NICU, that’s about as delicate a human as they make, and that’s been used for decades — also been used on the fragile and elderly in nursing homes.”

Nor is such an effective treatment subject to crippling expense or limited supplies. Bartlett stated that a single treatment of budesonide costs only “three dollars.” The reason for this, he explained, is its “generic” nature.

This low cost could also be why promotion of the medicine has been censored, Bartlett suggested. “Nobody’s going to make any money off it, which might be part of the pushback. Can you imagine if 90% of the hospital revenue was cut off because all of a sudden people don’t need to be in the hospital, because 90% of hospitalizations could be avoided? Can you imagine if there is a proven, safe, readily available medicine that’s 90% effective at least, and I have 100% of my patient that have lived?”

“Think about where people are dying from COVID,” continued Bartlett. “Are they falling over in their kitchen dying of COVID, or … are they dying in hospitals? I think everyone knows the answer to that.”

He furthered his point by hinting at potential negligence in the health system which has led to the death of thousands across the country.

“Could 450,000 deaths in the United States have been avoided with the safe, readily available, and inexpensive medicine that’s available in every pharmacy on every corner? I think that’s a good question.”

Bartlett has concerns not only about the health system, but Fauci in particular. He questioned why Fauci would have taken the time to deliberately speak against budesonide, when it was in fact saving lives. “If someone has been the medical expert for COVID in front of everybody … and he’s speaking against something that’s been an overwhelming success at saving lives, why are we still listening to him, why does he still have a microphone, and what was his motive in hiding this from the public?”

“I can’t answer what’s in his head, but I don’t think I like it. But I can say I care about people, God cares about people. This winning strategy was here available at the front end of this pandemic, and it was surpassed on purpose, targeted on purpose.”

Notwithstanding the attacks, Bartlett firmly promotes the use of budesonide for treating COVID-19. “There’s no randomized controlled trial for the things which [Fauci] is forcing upon the American people, but there is a randomized controlled trial for an effective, readily available, safe, inexpensive medicine that has been powerful, effective at saving lives from COVID, and that is good news.”

Bartlett revealed that he had been promoting the use of budesonide on local radio, and in his county there were “[fewer] deaths in 2020 during a pandemic, than in 2019, or 2018.” This was because doctors were using budesonide on the quiet.

He pointed readers and viewers to a website dedicated to the promotion of budesonide, which also assists people to source the medicine and thus gather effective treatment.

A committed Christian himself, Bartlett urged Americans to have hope, saying that “God still answers prayer, he’s still our provider and our protector.”