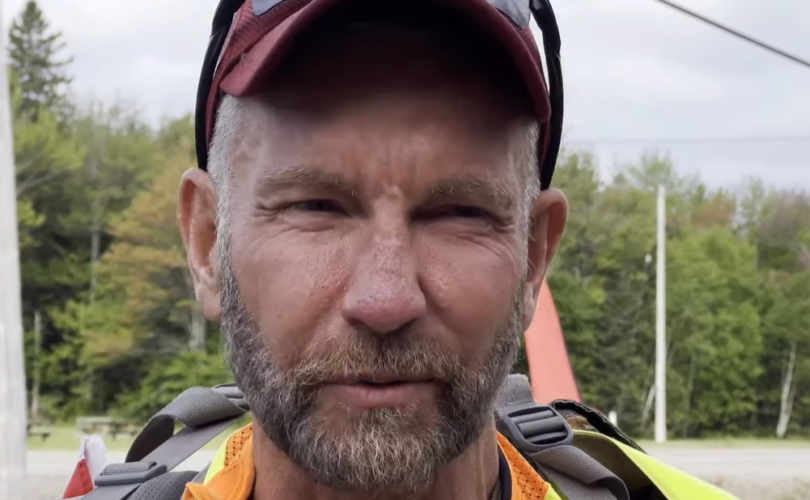 (LifeSiteNews) – A Canadian veteran on a county-wide march to Ottawa in protest of draconian COVID mandates will be joined in the last legs of his journey by Conservative Party of Canada (CPC) leadership candidate Roman Baber and People’s Party of Canada (PPC) leader Maxime Bernier.

On Tuesday, Bernier tweeted that he will join Canadian Armed Forces (CAF) veteran James Topp “for the last 30 km of his march on June 30!”

“Please come and support @CanadaMarches who is fighting for all those who lost their jobs because of Trudeau’s unscientific and authoritarian vaccine mandates,” Bernier tweeted.

Baber tweeted Monday that he will join Topp on June 15 “on the #MarchToFreedom.”

“We must respect choice of all Canadians, including CAF personnel. James is marching from Vancouver to Ottawa to support Canadians hurt by mandates. @CanadaMarches,” Baber tweeted.

Topp, who served for 28 years in the CAF, began his march after being inspired by the trucker Freedom Convoy that took place in Ottawa. He said seeing the truckers fight for Canadians’ freedoms gave him new hope and strength and faith in the working class.

He started his 4,395-kilometer (2,730-mile) journey in February, beginning from the Terry Fox monument in downtown Vancouver. His march will conclude at the Tomb of the Unknown Soldier in Ottawa later this month.

Topp took issue with the fact that Canada’s legacy media have not bothered to cover his journey in support of freedom.

As reported recently by True North, Topp said what he is finding is that there is “pretty much a total corporate media blackout on this endeavour.”

“To that end, I would say, you know, folks who want to go out there and start banging the drum and shaming the CBC or CTV,” Topp said.

“This is an amazing story of – 100 days in – a group of people who had never met each other before February 20.”

Topp noted that in Canada right now there is a “serious problem” with the “division that’s been produced over the past two years.”

“We’re going to come together with a number of organizations and hopefully work together with Members of Parliament to try to do something to fix that,” Topp noted.

The mission statement for Topp’s march reads, “We rise to serve Canadians with honesty, respect and compassion, for the purpose of reuniting our people. We do this with the intention of ensuring our government upholds the laws that support Canada’s Charter of Rights and Freedoms.”

Topp’s journey has been well documented on his website CanadaMarches.ca, which includes a map of his journey through Canada. His team is also posting regularly to Topp’s social media pages on Facebook, Twitter, and YouTube.

His CanadaMarches social media channels also show thousands of letters that people have been sending to their MPs, asking them to be in Ottawa when he arrives later this month. This letter campaign began after Topp encouraged people to write their MPs.

According to Topp, his top three main priorities are that COVID mandates be repealed, people who have been fired from their jobs for not getting the COVID jabs be reinstated, and that they receive restitution and repair.

Baber recently served as an MPP in Ontario and was kicked out of Premier Doug Ford’s Conservative Party for speaking out against COVID mandates of all kinds. In recent days, he has slammed the federal government for its draconian mandates still in place.

Bernier, who chose not to get the COVID jabs, for the past two years has also come out strongly against all forms of COVID mandates.

The PPC did not win any seats in the 2021 federal election but managed to pick up a larger percentage of the popular vote at 5 percent. The party platform blasts COVID-19 lockdowns, vaccine passports, and mask mandates.

Canada’s strict COVID measures were the catalyst for the trucker Freedom Convoy, which took to the streets of Ottawa to demand an end to all COVID mandates for three weeks in February. As a result, Canadian Prime Minister Justin Trudeau on February 14 enacted the Emergencies Act (EA) to shut down the Freedom Convoy.

The EA was also used to freeze hundreds of bank accounts, some of whom for people were not actively involved in the protests. It was the task of Canada’s national police force, the Royal Canadian Mounted Police (RCMP), to provide banks the lists of accounts that should be frozen. However, banks froze many accounts at their own discretion.

Recently, one of the main leaders of the trucker Freedom Convoy said he received an apology from the head office of Scotiabank for freezing his bank account due to his involvement with the protests.

The Trudeau government still has in place a mandate that all federal employees, even those that work from home, be “fully vaccinated” with the COVID jabs.

Also in place is a  mandate that in effect bans those who have chosen not to get the COVID vaccines to travel ban by air, rail, or sea. The travel vaccine mandate bans Canadians from flying within Canada as well as out of the country. Very few exceptions are given.