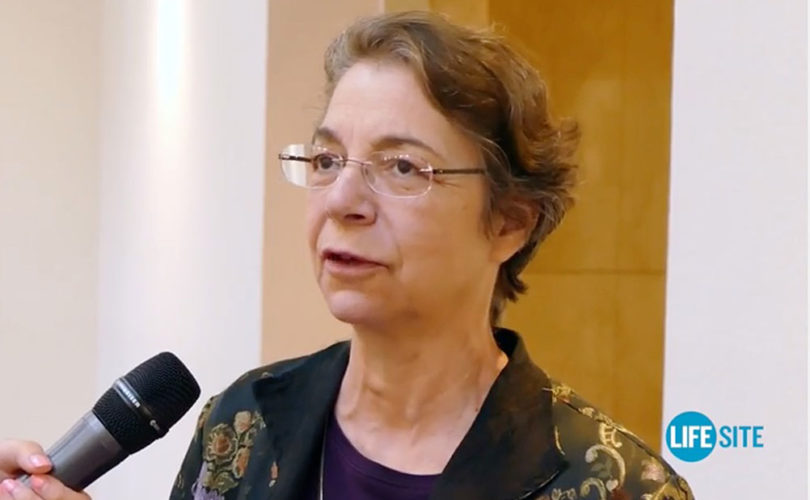 WASHINGTON, D.C., June 22, 2016 (LifeSiteNews)—The Planned Parenthood baby parts videos show “a glimpse of hell,” a veteran pro-life activist who has photographed and buried the remains of aborted babies throughout her life told LifeSiteNews in an exclusive video interview.

“Those videos captured for all posterity…the very way the abortion staff talks about the unborn, the way that they handled the unborn in the backrooms of their very own clinics,” Dr. Monica Miller, the director of Citizens for a Pro-Life Society and the author of Abandoned: The Untold Story of the Abortion Wars, told LifeSiteNews. “They will never be able to run from those images.”

See a preview of the full interview below:

The footage showing the “cold, impersonal way” abortion workers talked about the bodies of the aborted children in front of them as they were “literally rummaging through the body parts and holding up legs and holding up spinal columns and holding up intestines,” “kind of shattered me emotionally,” said Miller.

“I thought it was like a glimpse of hell,” she said. “I think my heart froze even after I’ve already seen with my own eyes, touched with my own hands, and literally spent hours, countless hours, photographing very up close and personal, the remains of aborted babies.”

In Abandoned, Miller recounted her first-hand experiences rescuing, photographing, and burying the discarded bodies of unborn children killed by abortion. Miller recorded many images of abortion victims available on the Internet today.

Victims of abortion “have a right to be seen,” Miller told LifeSiteNews.

“It’s a lie to cloak the truth about the humanity of the unborn child,” she said. “That photo is not just the photo of a hand of an aborted baby, that photo is the hand of a someone that we don’t know,” a person who was treated with unspeakable violence, a baby who has a “right to be seen.”

Miller strongly responded to the claims people sometimes make that showing images of abortion victims is an affront to the unborn victims’ dignity.

“If we hide the photos, if we don’t show them, or we restrict…their visibility, I think that is the denigration,” said Miller. She likened hiding images of the violence that abortion causes to telling people to think about Jesus, “who sacrificed His life for the sake of the whole world,” but never to think about the cross, or to only imagine a sanitized version of it.

The whole practice of abortion denies the existence of children in the womb, Miller said, and photos of aborted children prove that abortion kills human beings.

“In a photo, that abortion victim is speaking the truth of his or her existence,” she continued. “The truth of what happened to me. They have a right to speak who they are.  And we need to be confronted by the tragedy.”

Miller told LifeSiteNews that over the past 20 years, she has noticed a “very big change” in the Catholic Church’s approach to pro-life activists seeking funerals for aborted children recovered from abortion facility trash receptacles.

In Abandoned, Miller detailed various obstacles pro-life activists faced during the 1980s in working with local dioceses to provide funeral Masses and burials to the remains of unborn children recovered from garbage holders outside abortion facilities.

But “bishops are more sensitive about the issue of abortion” now than they were at the dawn of the pro-life movement, Miller said.

In 2008, when aborted babies were discovered in a trash bin in Michigan, “the Archdiocese of Detroit was very welcoming, very cooperative, and very sensitive,” Miller said. She noted that then-Auxiliary Bishop John Quinn personally officiated at two of the burials.

What struck Miller about burying the bodies of aborted babies was that this was the first work of mercy ever done for them, she told LifeSiteNews.