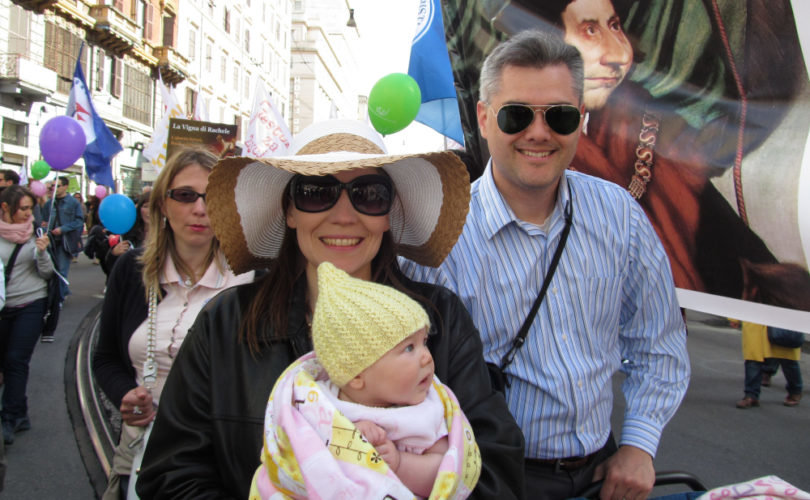 A veteran pro-life and family advocate is striking out on his own in a new apostolate to defend the teachings of the Catholic Church and her moral teachings.

Michael Hichborn, most recently director of the Defend the Family Project for the American Life League (ALL), says The Lepanto Institute for the Restoration of All Things in Christ aims to uphold the Church against attacks both external and internal.

The Lepanto Institute is named for the Battle of Lepanto, when in 1571 the Catholic coalition of nations known as the Holy League defeated the Ottoman Empire’s main naval fleet, preventing the empire’s expansion and Western Europe from being overrun. The victory is accredited to the intercession of the Blessed Mother, achieved through praying the Rosary.

Hichborn said the crisis in the Church internally and externally at that time in history mirrors the situation today. “The remedy is still the Rosary,” he said.

Among his goals is to inspire people to turn to the Rosary, Hichborn said, and to expose the attacks upon the Church for what they really are. Any force that aids and abets the enemies of the Church will be his focus.

“I’m hoping to be a voice and source of information for the bishops,” said Hichborn. “I’m just looking to help the Church with information and resources so she can make decisions.”

Hichborn’s specialty is research, having just spent over seven years performing it for the nation’s largest Catholic grassroots pro-life organization in the roles of director of the Defend the Faith Project, host of the American Life League Report, co-host of the On the Edge radio program, media director, creator of the Culture of Life lecture series, assistant director for outreach, and director of the Canon 915 Project.

Prior to his time at ALL, Hichborn helped found a Catholic high school and was dean of students at another Catholic school, both in his home state of Virginia. He has a BA degree in political science and economics, and a Master’s degree in education with a specialization in curricular development.

He and wife Alyssa are parents of five, ages 10 months to 11 years. His wife homeschools their children, and they live in north central Virginia.

With the Lepanto Institute he plans to issue reports on the actions of various agencies in areas such as social justice, pro-life activities, and politics. “Anything that is a danger to the Catholic Church in any way, shape or form,” he said.

Hichborn will send his reports to the US Bishops and publish them online. He’ll also work to educate Catholics on communicating with their bishops and raising awareness of the issues with other Catholics.

Part of this will include giving speaking presentations on the Church and the pro-life issue.

“My call to action will be to pray and fast for the bishops,” Hichborn said. “Particularly to pray the Rosary.”

Pointing out difficulties surrounding the Church doesn’t always garner favor, something Hichborn embraces as a cross to be born for the faith.

“I’m completely and totally motivated by my total and absolute love of the Church,” he stated.

He is deeply saddened when he sees lies spread about the Church, specifically in the areas of abortion, Communism, homosexuality and contraception, he said. The false impression of the Church that is often presented is something he is passionate about.

“I love the Church so much,” Hichborn said. “It’s important for me to speak out and defend her when I see her misrepresented.”

“Michael Hichborn is one of the pro-life movement's premier researchers. He is brilliant and indefatigable, tireless in pursuit of the truth,” said Steven Mosher, president of Population Research Institute (PRI). “I am delighted that he is starting The Lepanto Institute.”

The Institute will fill a need for an investigative body that will provide the pro-life movement in general, and the Catholic Church in particular, with in-depth investigative reports, Mosher said.

“Michael has done great work in the past,” he continued. “And we at PRI look forward to working with him on important projects such as research on the Catholic Relief Services and Catholic charities.”

“No doubt, Michael Hichborn’s new venture will continue to successfully defend life, faith and family,” said Father Shenan Boquet, president of Human Life International (HLI). “His good works within the pro-life community, especially with American Life League, have helped enlighten people to the evils of abortion, as well as to various alliances that have supported the Culture of Death.”

“I pray for a successful launch of The Lepanto Institute,” Father Boquet said. “He will surely help others embrace and build a Culture of Life so needed here in America and abroad.”

As committed as he is, Hichborn concedes that he, like anyone, is occasionally subject to discouragement. “We are human,” he said. “I take comfort in the fact that our God is not a God of results and success, but a God of fidelity. I get up every day and ask God, ‘What do you want of me today?’ The results are up to him.”

The Lepanto Institute website address is lepantoinstitute.org. The Institute is on Facebook at facebook.com/Lepantoinstitute and can be followed on Twitter at twitter.com/LepantoInst. Hichborn can be contacted at [email protected]. They are currently accepting donations by mail while they get their website donation system set up.