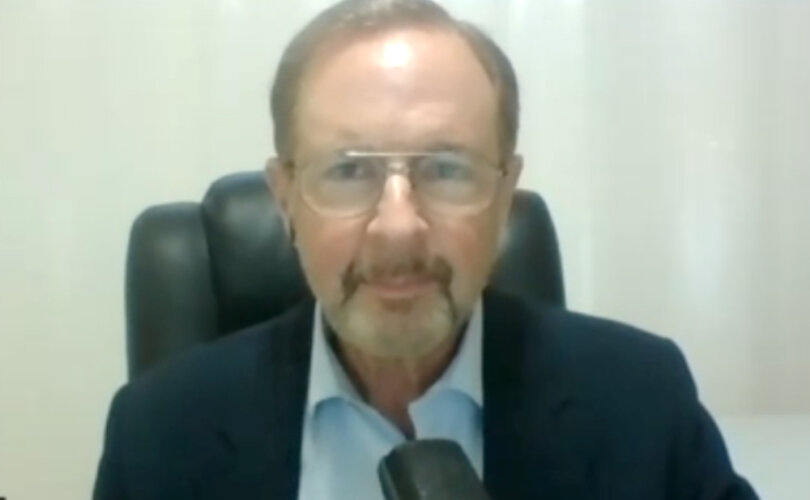 Dr. Robert Epstein in conversation with the WND News CenterScreenshot/Rumble

(WND News Center) – Empirical research shows Google affected the outcome of the 2016 and 2020 elections in favor of Democrats, and that the tech giant “has its digital thumb on the scale” of the current midterms, says Robert Epstein, a Democratic Party voter who was the famed behavioral psychologist B.F. Skinner’s last PhD student at Harvard.

In a WND video interview, Epstein contended, however, that his ever-growing, unique “Nielsen rating-type” system of monitoring Google’s manipulation of search results provides the solid evidence needed to stop the Big Tech behemoth in its tracks.

In the meantime, he said, the novel “Brave New World” has come to life.

Epstein recalled a lesser-known theme in President Dwight Eisenhower’s famous “military-industrial complex” farewell address in 1961, warning of a “technological elite” that could control public policy without the public’s knowledge.

The technological elite is now in power, he said, but there are ways to counter its tactics through technology itself.

“We will be monitoring in real time, and we will be exposing every single anomaly that we find,” he said, adding that “sunlight is the best disinfect.”

Epstein, a research psychologist for four decades, has served in various editorial positions at Psychology Today magazine and Scientific American MIND. He’s the author of 15 books and more than 300 scientific and mainstream articles on artificial intelligence and other topics. He currently is a research psychologist at the non-profit American Institute for Behavioral Research and Technology in Vista, California. His work can be seen at MyGoogleResearch.com.

‘To do what we want them to do’

He observes SEME by “looking over the shoulder” of the volunteer field agents, who allow their searches to be monitored, similar to how Nielsen monitors TV viewing habits. Their “ephemeral experiences” online – including search results – are captured before they disappear.

In 2016, his team recorded 13,000 searches on Google, Bing and Yahoo, and found that Google – and not the others – was generating results in Hillary Clinton’s favor through its search algorithm. He estimated the impact was from 2.6 million to as many 10.4 million votes shifted to the Democratic candidate, without anyone knowing.

In 2020, his team – expanding the scope to YouTube, Facebook and others – preserved 1.5 million searches, estimating some 6 million votes were shifted in favor of Joe Biden, for whom he voted.

In July 2019, for example, a senior software engineer at Google admitted the company is not politically neutral and that it manipulates search algorithms “to do what we want them to do.” Epstein also noted that Google internal emails leaked to the Wall Street Journal showed the company deliberately created “ephemeral experiences” to change people’s views about Trump’s ban on travel from terrorist nations.

Epstein doubts that lawmakers will make a serious attempt to take on Big Tech, with Democrats “lavishly” supplied with Google cash – 95% of Big Tech donations go to Democrats – and Republicans having a distaste for regulation.

In any case, regulation moves at a snail’s pace, he said, arguing tech needs to be fought with tech, and his scientific evidence can be used in lawsuits.

“I’m in touch with some state AGs and some other officials who are champing at the bit,” he said. “They’re just waiting to use the kind of data that we are collecting to go after these people.”

The RNC, he noted, recently sued Google, alleging the company suppressed tens of millions of emails.

Epstein recalled to WND that on Oct. 30, 2020, just before the Nov. 3 election, a New York Post reporter wrote a story about “election rigging” featuring his work. But a Post editor did some “fact checking” – which, said Epstein, likely meant he contacted a Google official – and then killed the story.

Significantly, only two weeks before that, the Post confronted Twitter after it suppressed the paper’s blockbuster Biden-family influence peddling stories.

“Instantly, Google turned off all of the manipulations, all of them, in the Georgia Senate races,” he said. “How do I know? Because we had more than 1,000 field agents who were monitoring content.”

If the bias is there, Epstein said, “we see it.” And if it disappears, “we see that, too.”

In Georgia, while Google stood down, Epstein found that on election day, Facebook and Instagram shifted thousands of votes to each of the Democratic candidates through targeting vote reminders to Democratic voters.

Epstein said he has information indicating that Google might turn off its manipulation software as election day on Tuesday approaches, adding that he is not at liberty to disclose details.

‘You have their attention’

The personal cost of his work – which he sees as an effort to preserve free and fair elections and ultimately the republic itself – has included the loss of friendships and some family members who “think I’m crazy.” But he’s also been warned that his safety is at risk.

After presenting his Google findings to the Senate in 2019 and drawing the attention of Hillary Clinton, Epstein gave a private briefing to state attorneys general. After the briefing, one of the state AGs took Epstein aside and shared his concern that Epstein might “die in an accident in the next few months.”

Shortly after that, Epstein’s wife was killed in a car accident under what he described as suspicious circumstances. A couple of months ago, there was a knife attack on a key staff member and her husband. And recently, a reporter told him of a conversation with a woman in Google’s PR department who “screamed” at the reporter regarding Epstein.

The reporter told Epstein there were two things he learned from that interaction. One is that “you have their attention.” And the second is, “I would take precautions.”

“We live in fear, all of us do,” Epstein told WND. “We’re tremendously excited about the science that we do, about the discoveries that we’ve made. But we’re also scared. I am.”

Epstein was asked why he’s willing to pay such a high price to continue his work.

“I’ve always felt that I was put here on this earth for a reason,” he said.

“I’m fulfilling my mission. I’m doing important work that needs to be done, especially because no one else will do it.”