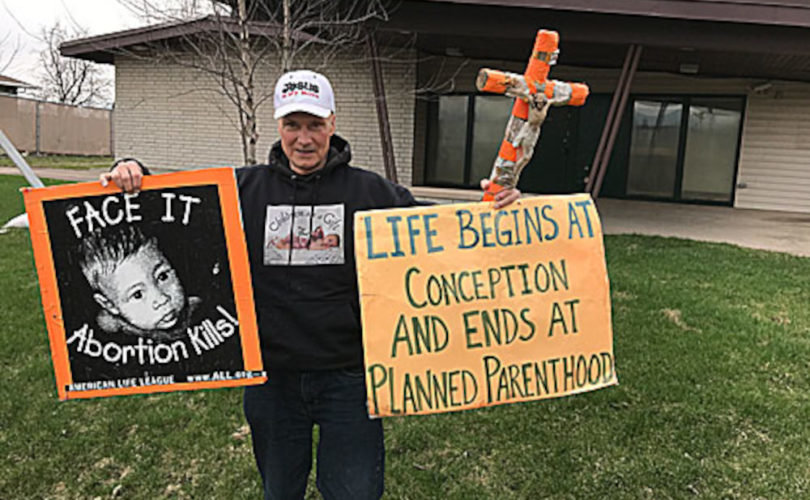 Van Boxtel has been offering abortion-minded mothers help outside abortion businesses in Grand Chute and then Appleton, Wisconsin, almost every day since he was laid off from work over 4 years ago. A friendly, peaceable character who refers to others as his “brothers and sisters in Christ,” Van Boxtel has made friends even with staff at the Appleton Planned Parenthood. He was chatting with the clinic’s security guard last Friday when his attacker first approached.

“Friday, at 3:30, I was talking with the guard and, all of a sudden, a guy walks through the parking lot and he takes my sign from the curb — a [wooden] crucifix with two babies on [the placard], a black baby and a white baby, and starts walking off with it,” Van Boxtel told LifeSiteNews.

“All of a sudden, he starts to tear the black baby’s head off,” Van Boxtel said. “So I grabbed with my open hand the [wooden sign post / cross] and he took both hands and pushed me real hard, real fast across the street.”

Seeing that Van Boxtel was hurt, the young man came over, put down the sign, and asked his victim if he could help him.

“They took him away in handcuffs,” the sidewalk counselor told LifeSiteNews, “and I tried to get up, but I couldn’t.”

The police called an ambulance, and Van Boxtel went to the hospital, where he had some x-rays. Fortunately, he hadn’t broken anything, but there was damage to the disks in his back, and he woke up in a lot of pain on Saturday. Nevertheless, he went back to his post outside Planned Parenthood.

As a veteran pro-lifer, Van Boxtel has many stories, both heart-lifting and hair-raising, about his ministry outside abortion businesses. On one occasion in Grand Chute, he went to a car window to offer a post-abortive mother a card for Rachel’s Vineyard. In response, she smiled and threw a container of coffee in his face. Van Boxtel told LifeSiteNews that she was stunned when, with coffee dripping down his face, he said he forgave her and asked her to take the card anyway.

“She wasn’t mad at me,” Van Boxtel said. “She was mad because [they] had taken the baby out of her body. She was mad at the nurse. She was mad at her boyfriend for forcing her have the abortion. So she took it out on me. I turned the other cheek, as Jesus said.”

However, Van Boxtel believes it would endanger everyone if he turned the other cheek to the young man who attacked him.

Something similar once happened to Van Boxtel in Grand Chute, but when he forgave an attacker without pressing charges, the man came back to attack him two months later, and Van Boxtel was saved from the beating only by the clinic guard.

“So you’ve got to show them you can’t put up with it because they’re going to keep on doing it,” the sidewalk counselor said.

Van Boxtel believes that pressing charges is necessary, therefore, to save both himself and other pro-life activists from violence.

— Article continues below Petition —
PETITION: Support Archbishop Naumann's defense of LIFE as head of Bishops' Pro-Life Committee
Show Petition Text
25835 have signed the petition.
Let's get to 30000!
Thank you for signing this petition!
Add your signature:
Show Petition Text

Anne DeMeuse of Pro-Life Wisconsin said that her organization reached out to Van Boxtel when they heard about the attack.

“We’ve known him for years. He’s always out in the front of Planned Parenthood. He started out in Grand Chute … and now he’s in Appleton.”

DeMeuse said that this was probably the most “physical” attack on a Wisconsin pro-life activist this year so far. There have, however, been other incidents in the past, and pro-lifers also suffer from verbal assaults.

Dan Miller, the state director of Pro-Life Wisconsin, stated in a communique on the organization’s website that he was grateful to God for the swift help Van Boxtel received.

“We thank God for the quick thinking of the security guard who called the Appleton police to come to Duane’s aid,” he said. “He saw the injustice of what was happening and acted on it.”

“Duane Van Boxtel is what heroes are made of,” he said. “He is the embodiment of what it means to love your neighbor as yourself. He not only stands in the gap for his preborn brothers and sisters in Christ but treats every employee of Planned Parenthood as members of the body of Christ. Maybe, by some miracle, the employees at this location will see that what happened to Duane is not all that different than what Planned Parenthood of Wisconsin does 4,639 times a year — they bully humans that are smaller in size by killing them.”

The attack was similar to that on Donna During, an elderly sidewalk counselor in Louisville, Kentucky, in 2019. During was pushed violently to the ground by a young woman leaving the E.M.W. Women’s Surgical Center abortion business and suffered a broken thighbone and a head wound.

LifeSiteNews has reached out to the Appleton Police Department and is applying to see a police report on the incident.