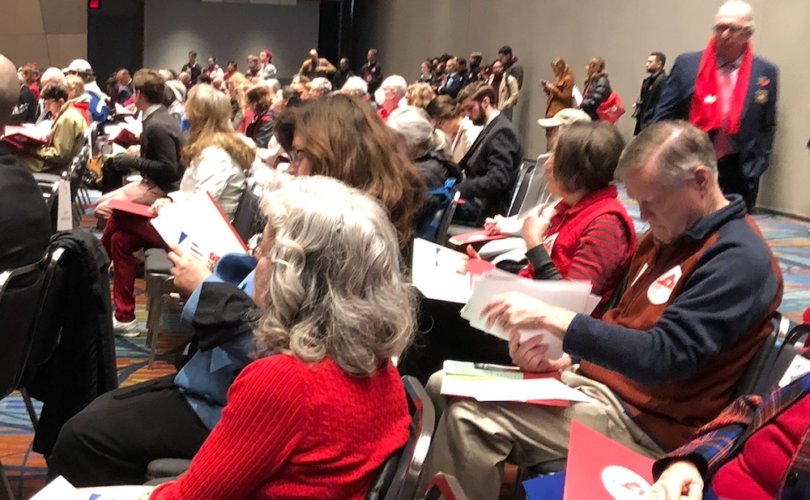 RICHMOND, Virginia (LifeSiteNews) —More than 300 pro-life constituents from districts across the Commonwealth gathered in Richmond Wednesday to meet with legislators during Virginia’s first legislative session of 2022. As the session nears “crossover day,” when bills move between the House and the Senate, pro-lifers sent a strong message to their representatives, calling on them to vote in favor of pro-life legislation.

Coined Defending Life Day, the February 9 event was a collaboration between the Virginia Society for Human Life (VSHL), the Virginia Catholic Conference, and the Dioceses of both Richmond and Arlington.

“We know how powerful the voice of constituents can be,” said Olivia Gans-Turner, the VSHL president.

“We are doing this event to be the voice of the voiceless unborn, their mothers, and other vulnerable human lives. The aim…is to encourage in-person interaction with pro-life citizens and their elected officials.”

“Whenever I’m presenting a bill and I have a room full of people with standing room only…it sends a message…to the legislators,” Chase said.

“I’m being watched, and I need to take this seriously. We vote on thousands of bills every session, and it lets the legislators know what bills are important to the people.”

“Hearing from constituents has a big impact on how legislators cast their votes,” LaRock said. “The strongest instinct in most politicians is self-preservation.”

Federal policy known as the Hyde Amendment allows taxpayer funding for abortion only in the case of danger to the life of the mother, rape, or incest, but in Virginia, taxes pay for abortions when the baby has a serious disability. The Preventing Taxpayer-Funded Abortions legislation would align Virginia’s state funding with federal funding restrictions.

The Women’s Right to Know Law, HB 212, would reinstate a 2001 law that was dismantled by the pro-abortion legislators in 2020. The law would require the state to provide women in crisis pregnancies educational material stating the facts about abortion procedures and risks, and the mother’s legal rights, and require a 24-hour waiting period.

Former Virginia Governor Ralph Northam shocked the nation with comments on allowing the death of a child born after a failed abortion. The Born Alive Abortion Survivors Protection Act provides protections for these infants so that an abortion provider cannot leave a baby to die.

Joint bill HB 1274/SB 710 would protect the life of an unborn child after 20 weeks in utero, founded on medical evidence that unborn children are developed enough to experience pain at this point. The bill allows for abortion if the pregnancy would cause the mother to lose her life. Nearly 20 states have similar protections in place for the unborn. The Senate bill was voted down along party lines February 10, but is still active in the House.

‘I had the experience of being a pregnant teenager’

Participants began the day at the Richmond Convention Center, which opened with prayer. Bishops from both of Virginia’s Catholic dioceses attended as well as youth from several Catholic high schools. Adoption advocates were also in attendance, as was Executive Director Kristen Day from Democrats for Life.

Jeanie Grumblatt, a constituent from District 10, shared her personal reason for advocacy.

“I had the experience of being a pregnant teenager,” Grumblatt said.

“I’m an adoption advocate because I personally went through that myself and want to stand in solidarity with all my fellow pro-lifers. I’m here to say this: Choosing life is the only way to go.”

Margaret Colbert and Kevin Crouch (District 39) were slated for meetings with pro-abortion legislators.

“I think today is an opportunity for us to just dialogue,” Crouch said.

“Mark, our senator, is a Democrat, but he represents us as well. So I think if we bring our voice to him and have a conversation and a dialogue, then that will at least let him hear another side of the story, a side that obviously we feel is very important. I think the long game is we have to change hearts, as believers.”

Colbert attended the first March for Life in 1975 and has a “lifelong commitment” to defending the unborn from conception to birth.

“The unborn child is a citizen; it’s one of [my legislator’s] constituents,” Colbert said. “I just firmly believe we should inform him of that.”

Virginia law has become “too radical” and threatens rights in our state Constitution, she added.

Pro-life lobbyists have noticed a tremendous decrease in constituent in-person representation in Virginia’s General Assembly in recent years. This comes in the wake of pandemic restrictions and remote work. Defending Life Day aims to reverse that trend, bringing constituents back into the Pocahontas building.

“We have a lot of work to do to educate and advocate,” said speaker Dean Nelson, vice-president of government relations at the Human Coalition, appointed to serve on the congressional Frederick Douglass Bicentennial Commission.

“I was introduced to abortion in the context of race and racism and [comparisons] to slavery. We think about the work for decades that was done to eliminate slavery, and … in many ways I try to encourage advocates today to…remember that abolition movement, to never give up, to not be concerned that the courts might be against us, because we have someone who is greater than the courts whose side we’ve chosen to be on. We pray and look for abortion to be on the ash heap of history, just as slavery was.”

Organizers plan to make Defending Life Day an annual event in Virginia, ensuring that legislators hear advocacy for life from constituents across the state.