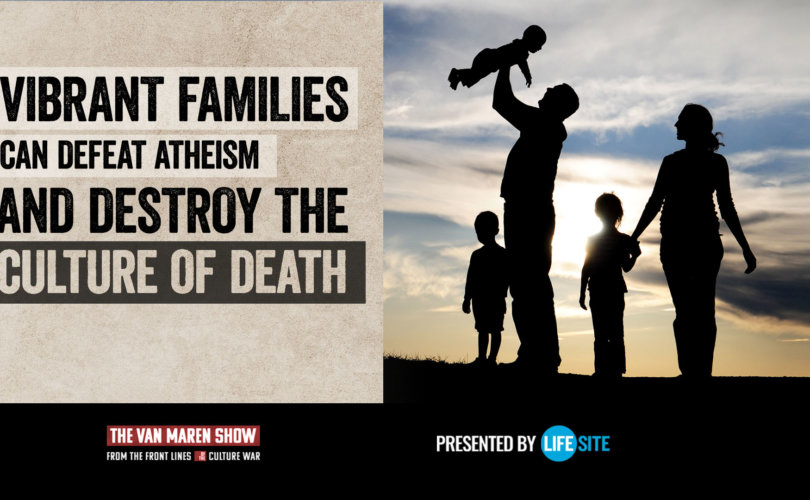 March 4, 2020 (LifeSiteNews) – We live in a largely godless society. Compared to ages past, belief in a god is plummeting and moral degradation seems to reach increasingly new lows every day. What caused this shift?

Conventional teaching tells us that Western Civilization began to lose God after the World Wars. Seeing the depravity of the wars and the great hatred and violence that occurred, many lost their faith in God. Mary Eberstadt, author of How the West Lost God, argues it isn’t quite that simple.

In today’s episode of The Van Maren Show, Eberstadt joins Jonathon Van Maren to discuss the decline in religious belief in Western Civilization and what we can learn from it.

Eberstadt highlights a significant flaw in the conventional idea that the wars started the decline toward a godless society, noting that now-secular societies experienced a religious boom after the war. Additionally, secularism has seemed to creep into the societies of the vanquished, the victorious, and the neutral, without any discrimination.

Eberstadt instead points to the decline in vibrant families as the root of secularization in the west. Without a strong, vibrant family unit, the faith wasn’t passed down from parents to children.

The death of the family wasn’t spontaneous, though. The sexual revolution helped to spark the now-rapid decline in the family.

The birth control pill and the sexual revolution exploded in the 1970s. Most people began to expect that sexual relations outside of marriage were okay, even if they didn’t personally engage in that behavior. This lackadaisical attitude – by parents, society, and even churches – is largely responsible for the boom of the sexual revolution.

Most people just didn’t understand the importance of this movement, or the broad-reaching impacts it would have.

With the sexual revolution came a sharp increase in the number of broken families and children born out of wedlock. There was a decrease in marriages and an increase in divorce, resulting in the overall degradation of the family unit.

Eberstadt and Van Maren acknowledge that the birth of a child generally brings people back to the faith. The transcendent nature of the birth of a child touches most people in a way few other life events can. Even if they don’t see a need for religion in their own life, they want to give their children purpose and meaning.

Family funerals are another pivotal point in which many people turn back to religion. When faced with the idea of death, people realize and seek a deeper meaning to life.

Eberstadt points out that not only do we have broken immediate families, but extended family bonds are often non-existent or strained. It is less common for people to attend the funeral of an aunt or uncle, much less a great-aunt.

It is also quite difficult to maintain a consistent faith practice when children are with their father one weekend and their mother the next. Dad may bring them to one church, and mom to another. Dad may teach one faith and set of values, mom another.

Listen to the full interview

Some governments are seeing the broad-reaching societal impact of the decline of the family structure and trying to do something about it. Hungary is leading the charge by offering policies and tax structures that incentivize and benefit families. Hungary provides families with large tax breaks, stipends, student debt reduction, mortgage assistance, and much more based on the number of children they have.

What the Hungarian government didn’t expect is that these pro-family policies led to a sharp decline in abortion rates there.

Many libertarians may disagree, but Eberstadt argues that encouraging intact families would be beneficial to governments.

An intact family means less of a burden on the welfare system, decreased crime, and improvements in society overall.

Eberstadt and Van Maren also discuss the abortion referendum in Northern Ireland, the pro-life movement, and what we can do to raise vibrant families.

Take a few moments from your day to join Eberstadt and Van Maren and learn about how you can help to save the culture.