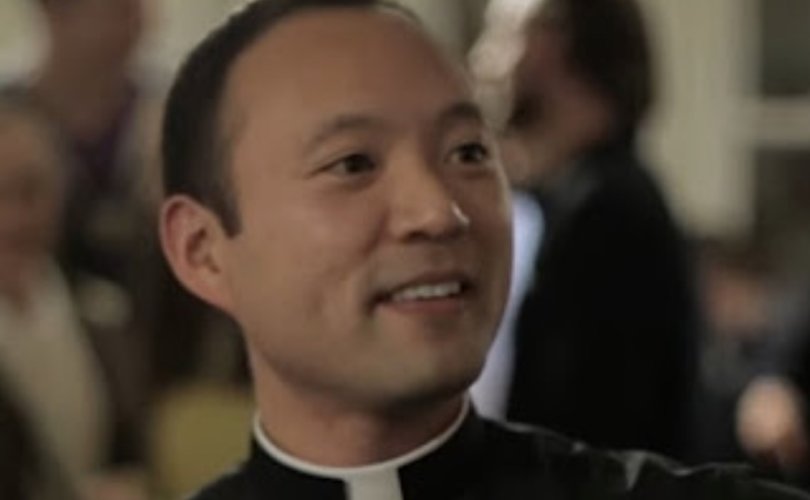 ROME, Italy (LifeSiteNews) – The vice-rector of the North American College (NAC) in Rome is returning to the United States.

Father Adam Park has stepped down from the senior position at the elite seminary following allegations that he sexually harassed seminarians under his care.

According to the Complicit Clergy website, NAC’s rector, Father Peter Harman, stated that Park would “not be returning” to his position as the new academic year approaches. The announcement appeared in the wake of litigation alleging sexual misconduct and cover-ups at the seminary over many years and implicating some 30 clerics, including Harman and Cardinal Timothy M. Dolan of New York.

In the lawsuit, ex-seminarian Anthony Gorgia alleges that, while a student at NAC, he witnessed inappropriate physical contact initiated by Park on a seminarian. The lawsuit also contains the accounts of other seminarians who allege he has a history of similar inappropriate behavior.

Gorgia filed his complaint against NAC, the Archdiocese of New York, Dolan, Harman, Park, Father John G. McDonald, a NAC lecturer, as well as a number of John Does, in February, and is suing for $125 million. The suit alleges defamation and discrimination against Gorgia for his heterosexuality and the spinal condition which caused him to take a six-week medical leave. The former seminarian stated also that he was harmed financially and emotionally by those named.

According to victims’ rights advocate Gene Gomulka,  Gorgia’s legal team procured new testimony against Park and Harman in affidavits filed this June, including allegations that Omaha’s Archbishop George Lucas was guilty of sexual misconduct with Harman. One of the sworn testimonies was reportedly provided by a retired FBI Special Agent in Charge (SAC).

In Gorgia’s February lawsuit, the former seminarian claimed that Park, who was ordained by the disgraced former Cardinal Theodore McCarrick – who now faces charges of sexual assault against a teenager – and Harman were both known by seminarians to have engaged in homosexual activities.

The more recent affidavits reportedly support Gorgia’s claims, with one of Park’s alleged victims saying that, as a seminarian, the former vice-rector “would often approach men from behind and … caress and rub their shoulders and upper back and put his hand on the small of their backs.”

According to Gomulka, the affidavits say this behaviour “was not invited by the other men,” and the alleged victim added that Park would single out “seminarians who were younger than he was.”

Describing his own experience with Park, who had been his classmate at NAC, the alleged witness stated that the priest had rubbed his pectoral muscles and done other things which “had a definite sexual connotation; were unwanted; and unwelcomed.”

Regarding allegations that NAC administrators conspired against Gorgia after he witnessed Park’s sexual misconduct, the subject of this affidavit said that he, too, had been side-lined by Harman, the seminary’s rector.

“[T]here was no indication that Harman had taken any dutiful action which, as rector, he would have been obliged to do,” the claimant alleged, adding that “it became obvious that no investigation had ever occurred and that the NAC had neither been transparent nor wished to hear from me.”

Furthermore, allegations against Harman and “the former Bishop of the Diocese of Springfield, Illinois”—now identified by Gomulka as Archbishop Lucas—first raised by Gorgia in his February lawsuit, were reportedly corroborated by an FBI SAC in a separate affidavit.

Park’s home diocese is Washington, D.C., where he once served as the secretary to Cardinal Donald Wuerl. The archdiocese is currently under the leadership of LGBT-apologist Cardinal Wilton D. Gregory.

As the Archbishop of Atlanta, in 2013 Gregory reinstated a priest he had suspended after the latter’s ex-lover made their homosexual relationship public. In 2018, Gregory invited LGBT activist Father James Martin to speak in his archdiocese multiple times. Gregory also appointed pro-homosexuality Monsignor Henry Gracz his diocesan spiritual director for victims of sexual abuse by clergy in 2018.

Park’s resignation comes just five months after he was named in Gorgia’s lawsuit, and a matter of weeks after former general secretary of the USCCB Monsignor Jeffrey Burrill resigned his post following revelations made in an investigative report by The Pillar that he was active on the homosexual hook-up app Grindr.

“We contest every and all allegations completely and categorically,” he wrote.

“Regarding your request for comment, the Pontifical North American College was saddened to hear that former seminarian Anthony Gorgia is attempting to use civil courts to sue his former seminary, Church, and bishop,” he continued.

“We have full confidence in the Rector, staff, and seminarians of the North American College. Seminarians are encouraged to report any allegations of misconduct and assured that such allegations are taken seriously. Unfortunately, Mr. Gorgia never made any allegation of misconduct to NAC leadership during his time as a seminarian. We do anticipate defending ourselves vigorously against Mr. Gorgia with the facts of the matter.”

LifeSiteNews reached out to Harman regarding the more recent affidavits but has not yet received a response. LifeSiteNews has also contacted Gene Gomulka and Bishop Lucas.