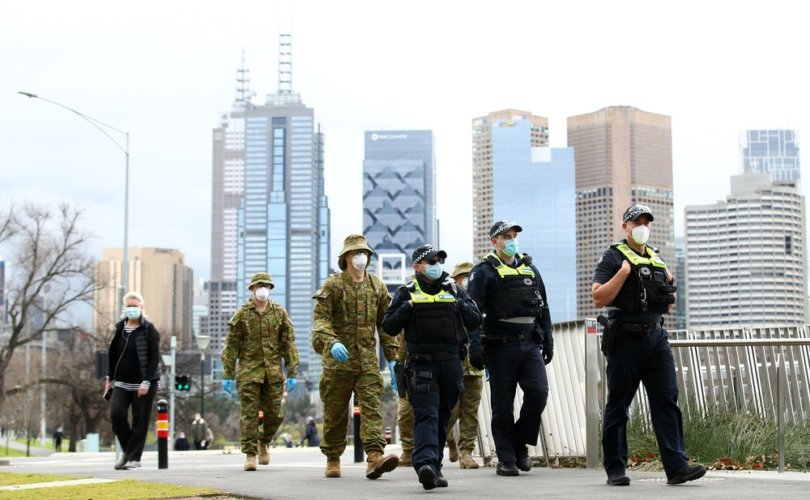 Police and the Australian military patrol the banks of the Yarra River on July 23, 2020 in Melbourne, Australia. Lockdown measures in the Australian state of Victoria are some of the most draconian in the world. Photo by Robert Cianflone / Getty Images

VICTORIA, Australia, September 17, 2020 (LifeSiteNews) — A Victoria Police not-for-profit organization is selling masks emblazoned with the symbol of the Freemasons.

“The Victoria Police Blue Ribbon Foundation perpetuates the memory of members of the Victoria Police who have died in the line of duty through the support of worthwhile community projects within Victoria,” their website explains.

The Freemasons Foundation Victoria is likewise listed first on The Victoria Police Blue Ribbon Foundation website as one of their “major partners.”

Cornelius has played a conspicuous role as one of the spokespeople for the heavy-handed policing in Victoria amid a draconian lockdown regime. He recently described anti-lockdown protestors as “selfish,” “boofheads,” and “bats***t crazy.” Mainstream Australian media celebrated Cornelius’ comments, describing them as a “stunning take-down of the ‘tin foil hat brigade.’”

In recent weeks Victoria Police have been gaining worldwide attention for their heavy-handed treatment of those not complying with lockdown restrictions. Videos which have gone “viral” online on social media in recent weeks include Victoria Police arresting a pregnant woman in her own home for the “crime” of promoting an anti-lockdown event; Victoria Police smashing the door down of a man’s home and arresting him for allegedly promoting anti-lockdown events online; and a video which shows a young woman being forced to the ground by a large, male police officer for the “crime” of not wearing a mask in public.

This past weekend, Victoria’s senior politician, State Premier Daniel Andrews, said that “all this can be avoided if people don't protest” coronavirus restrictions in response to questions about video of police first knocking down a mentally ill man with their vehicle and subsequently stomping on his head. An official police statement described the stomp as “inappropriate use of force” and the “use of force in using a police vehicle” as “concerning.”

The man had to be put in a medically induced coma. His family says they will pursue legal action against the police.

Also this past weekend, according to reports in Australian media, almost 200 people were fined and 74 arrested at events protesting the Victoria coronavirus restrictions, with multiple videos of dramatic arrests posted online.

Victoria currently has one of the strictest coronavirus lockdowns anywhere in the world, with daily curfews and mandatory mask wearing in public. People are severely restricted in where they can go and what they can do.

Last month Victoria police chief commissioner Shane Patton was unapologetic as he explained that police had in some instances been smashing car windows due to people inside the cars not cooperating with police or following the government’s coronavirus restrictions.

The Victoria Police have received further recent media attention due to a Royal Commission investigation into the Management of Public Informants which has identified 124 criminal convictions in Victoria as “tainted” due to the police using evidence given to them by barrister Nicola Gobbo about her own clients. Victoria Police have issued an apology and admitted that they were “profoundly wrong” to allow Gobbo to inform on her own clients.

Victoria Police also played a crucial role in the conviction and imprisonment of Cardinal George Pell for more than a year before his unanimous acquittal by the Australian High Court in April.

The charges were originally laid after an Australian police investigation, code-named “Operation Tethering,” actively sought evidence that Pell committed sex crimes, even though no complaint had been made against him. A number of men came forward with stories; all but one were dismissed.

Ultimately, only one man, known as “Witness J,” testified against Pell. The other former choir boy named in the charges died before the case came to trial, but before he died he told his mother that the abuse never took place.

Last year, an Australian-based Catholic priest publicly admitted to having been a Freemason for more than a decade. Father Kerry Costigan also claimed to have a letter from the Australian Catholic Bishops’ Conference (ACBC), giving permission for Catholics to become Masons. “This permission was said to be based on the erroneous conclusion that 'Australian' Freemasonry is somehow different from any other form of Freemasonry,” Australian journalist  Kathy Clubb wrote in a December 2019 article re-printed on LifeSiteNews.

The 1917 Code of Catholic Canon Law made clear in Canon 2335 that Catholics who become Freemasons are automatically excommunicated — that is, they cease to be members of the Catholic Church and may not receive Holy Communion.

In 1983, when a new Code of Canon Law was published, the explicit reference to the Freemasons was removed. The new relevant canon, 1374, states: “A person who joins an association which plots against the Church is to be punished with a just penalty; however, a person who promotes or directs an association of this kind is to be punished with an interdict.”

Subsequently, the Vatican’s Congregation for the Doctrine of the Faith (CDF) issued a Directive on Masonic Associations that stated:

1. The Church’s negative judgment on Masonry remains unchanged, because the Masonic principles are irreconcilable with the Church’s teaching.

2. Catholics who join the Masons are in the state of grave sin and may not receive Holy Communion.

3. “No local ecclesiastical authority has the competence to derogate from these judgments of the Sacred Congregation.”

But Klubb’s investigation revealed that in 2017, Fr. Stephen Hackett, then ACBC secretary, wrote to the former Masonic grand master of Northern Territory/South Australia, Mr. Stephen Michalak, to advise him that the Bishops’ Conference had stated that “no penalty attaches to Catholic membership of the Masonic order.” The letter said that the ACBC first issued a directive to that effect in 1984 and had affirmed it in 2017.

The letters in question from Grand Master Stephen Michalak and the response from Father Stephen Hackett, MSC on letterhead of the ACBC can be viewed at the website of Family Life International Australia.

In his 1884 encyclical Humanum Genus, His Holiness Pope Leo XIII described Freemasonry as the chief organizing force of the “partisans of evil” in society.

At this period, however, the partisans of evil [seem] to be combining together, and to be struggling with united vehemence, led on or assisted by that strongly organized and widespread association called the Freemasons. No longer making any secret of their purposes, they are now boldly rising up against God Himself. They are planning the destruction of holy Church publicly and openly, and this with the set purpose of utterly despoiling the nations of Christendom, if it were possible, of the blessings obtained for us through Jesus Christ our Saviour. Lamenting these evils, We are constrained by the charity which urges Our heart to cry out often to God: “For lo, Thy enemies have made a noise; and they that hate Thee have lifted up the head. They have taken a malicious counsel against Thy people, and they have consulted against Thy saints. They have said, ‘come, and let us destroy them, so that they be not a nation.’”

Update 09-22-20 09:53 EDT: This article was updated to provide more background information on the Church’s stance on Freemasonry, among other updates.