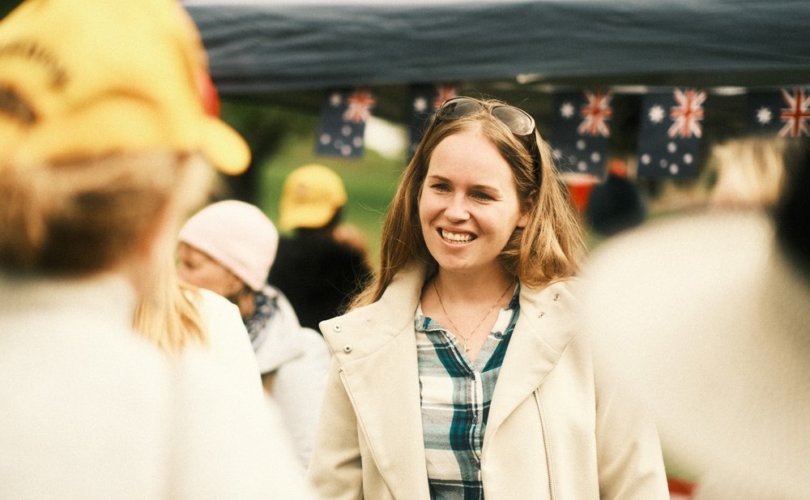 Smit was arrested by Victoria Police last August on charges of incitement after resisting the draconian lockdown restrictions introduced by the Victorian government, purportedly on the basis of “protecting public health.” She was subject to punishing bail conditions, which she refused to sign, leading to a three-week stint in solitary confinement at a maximum-security prison.

On Monday morning, however, Smit received an email from Victoria Police confirming that they would no longer pursue incitement charges against her.

According to Smit, the police wrote that the “Director of Public Prosecutions has decided to discontinue the incitement charges on the basis that there is no longer a public interest in pursuing these matters, given the time Ms. Smit has already spent in custody. For the same reason, the [Section] 465AA order [password warrant] will not be enforced.”

Victoria Police had originally arrested Smit on allegations that she had “incited” Victorians to break the draconian lockdown measures implemented by the state government at the behest of the chief medical officer.

A Melbourne magistrate had set out burdensome bail conditions at the time of Smit’s August arrest, including a gag order on publishing “any material which incites opposition to the Chief Medical Officer’s directions” while being forced to “remove any materials which incite opposition to the Chief Health Officer’s directions” from the website of her pro-freedom organization Reignite Democracy Australia (RDA).

Smit refused to sign the bail conditions, subsequently spending 22 days in solitary confinement before successfully appealing to overturn the conditions.

The human rights activist was later issued a warrant by the Victoria Police demanding that she hand over the passwords for her numerous private and RDA-linked social media accounts, which would have granted access to “privileged legal and medical communication” contained within those accounts. Again, she refused to comply.

Smit faced five years in prison for refusing to bow to the demands of the warrant.

Per Monday’s Victoria Police statement, Smit will no longer be subject to either the incitement charge or the password warrant.

Australian Rebel News journalist Avi Yemini, who has himself been subject to arrest by Victoria Police while reporting on lockdowns in the Australian state, questioned on Twitter why the mainstream media is not paying attention to Smit’s ordeal.

Why is the mainstream media IGNORING the Monica Smit story?

Victoria Police must be held accountable.

It should be the lead story nationally.

She should be trending here.

You know what to do. https://t.co/z8DrYUnFc3

Smit, who is a Catholic, celebrated the decision to drop the charges, giving in a video statement gratitude to God and her supporters who prayed and donated financially to her cause.

“I could not and would not have had the strength that I had without every single one of you backing me, praying for me, financially supporting me, sending emails – and I do read a lot of them – so thank you,” she stated.

“Without you absolutely none of this would be possible, and without God helping me and guiding me and giving me peace, even in terrible times.”

In comments to LifeSiteNews, Smit argued that incitement allegations were unjust since “protesting is a basic human right.”

“Even if there is a government enforced lockdown, no government should be able to restrict our basic human rights of movement, gathering, and speech,” she said, promising to “uphold the value that all Australians have the right to voice their convictions in a peaceful and undisruptive manner.”

Commenting on the possibility of pursuing legal action against Victoria Police, Smit said “that is definitely on the cards.”

Though she still has to contend with summary offenses related to COVID restrictions, the freedom fighter said that she “intends to make them [Victoria Police] accountable for their actions.”

“I have leftover funds to pursue this further, and I intend to do so,” she stated. “Any compensation I receive will go straight into my organization (RDA) so that we can continue to fight for individual and collective liberty. If there are any funds left over, I will offer a refund to those who contributed.”

Continuing, Smit told LifeSiteNews that it is unclear exactly what led the police to drop the charges, but explained that “there’s an election in Victoria this year and the current government is struggling to maintain public support after the way they locked us down and took away our human rights for extended periods of time.”

“I have a lot of support from the public, and I don’t think it was in their best interest to pursue my charges any further,” she said, arguing that the decision “has nothing to do with public interest, it’s more about their interests.”

Additionally, Smit explained that “the COVID hysteria has died down a lot and the public are no longer as afraid as they used to be. Pursuing charges on a woman like me for allegedly organizing lockdown protests would now seem very politically driven and unjust to most people.”

The activist noted that she has been on bail for over ten months “which has caused me immense anxiety … and now the charges are dropped just like that. What was it all for? Why did they waste so much taxpayers’ money trying to convict me for being a human rights activist?”

Smit said that Australians “should be shocked at the behavior by the police towards a tax-paying citizen with no criminal record like me. This is not the Australia I grew up in, and I hope they are held accountable for their treatment towards me.”

Regarding the work of RDA, Smit said that “the most impactful thing is that the dark cloud over me has lifted. I am no longer on bail and my energy can be used in more productive ways. I feel like I have a new set of wings, and I intend to use them to the greatest of my ability.”

To this end, she has launched a new global initiative called Reignite World Freedom, which will unite individuals in a “strategic pushback against the globalist agenda, ensuring we maintain our individual and collective liberty.”