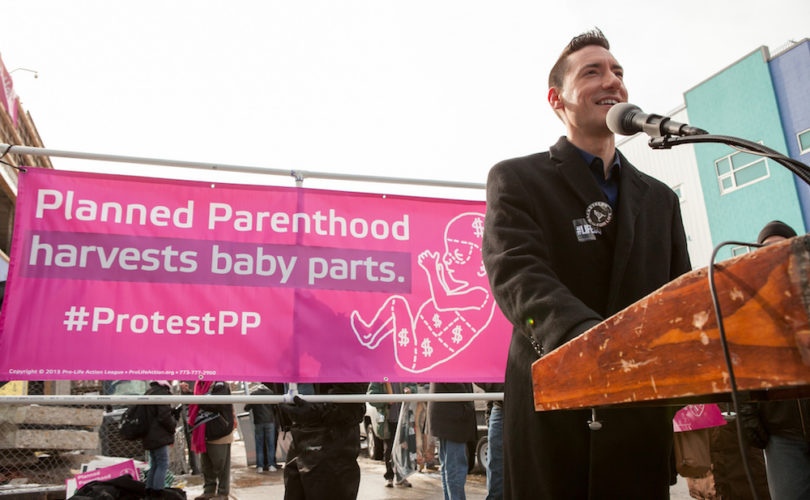 DV Biologics and DaVinci Biosciences were exposed in the summer of 2015 as illegal for-profit fetal parts traffickers in undercover videos taken by the Center for Medical Progress at abortion trade conventions. In September of that year, Orange County’s district attorney’s office began an investigation of its own. It filed suit just over a year later in Orange County Superior Court.

“This settlement seized all profits from DV Biologics and DaVinci Biosciences, which they acquired by viewing body parts as a commodity and illegally selling fetal tissues for valuable consideration,” District Attorney Tony Rackauckas said in a statement.

“These companies will never be able to operate again in Orange County or the state of California,” he added.

Troy Newman, President of Operation Rescue, called the verdict a “major victory for…the entire pro-life movement, and it’s one that we should celebrate.”

“These companies were caught on camera by the Center for Medical Progress — an organization which I helped to co-found — and now they’re being held accountable for breaking state law,” he said in a statement.

“This is an outcome I have been praying for, and the Lord heard our prayers,” he added.

Prosecutors accused both companies of illegal and fraudulent business practices.

Terms of the $7.785-million settlement signed Monday include both research companies closing within 60-120 days. Both must also admit criminal liability for violating state and federal laws.

The legal complaint charged DV Biologics and DaVinci Biosciences with selling brain tissue from aborted babies around the world for up to $1,100 per vial.

D.A. Rackauckas explained, “This lawsuit is aimed at taking the profit out of selling body parts.”

Prosecutors accused the companies of jacking up prices above what actual costs were. The companies hired sales and marketing experts to push “product.”  Staff was paid on commission, even for doubling the charges for packing, handling, and shipping.

“It costs us roughly $25 per unit to manufacture, and we are selling from $170,” one employee admitted in an email.

Both companies are owned by members of the Isaias family.

Significantly, the Orange County lawsuit does not name or mention Planned Parenthood, which was under contract to provide the aborted baby parts.  Deputy D.A. Kelly Ernby said the nation’s largest and most lucrative abortion conglomerate was not part of the investigation.

The lion’s share of the settlement comes from the value of DaVinci Biosciences' adult tissue samples, which are worth an estimated $7.5 million. These will now be donated to non-profits. Also to be given away are storage containers and equipment.  DV Biologics will also pay $195,000 in civil penalties.

In 2015, the Center for Medical Progress (CMP), led by investigators David Daleiden and Sandra Merritt, secretly recorded meetings and conventions of the abortion industry to expose possible criminal activity. The CMP undercover videos showed Planned Parenthood officials eager to make profits off the illegal sale of baby parts, talking about the illegal modifying of abortion procedures to obtain “intact” babies for sale and “fresh” specimens to pay for luxury cars for Planned Parenthood staff.

The videos caused a firestorm of controversy erupted across the nation.  Both houses of the U.S. Congress began hearings in an attempt to defund the abortion giant, and many states began making attempts to de-tax fund Planned Parenthood.

The fight to de-tax fund Planned Parenthood continues to this day.

Each and every day that we can, we must continue fighting to protect life.

“The more we can expose the criminal activities going on within the abortion industry, the more public opinion will be shaped by the truth about the National Abortion Federation and Planned Parenthood,” said Newman.

“We must continue these efforts so we can overturn Roe v. Wade on the ground. With every clinic we close, lives are saved,” he added.