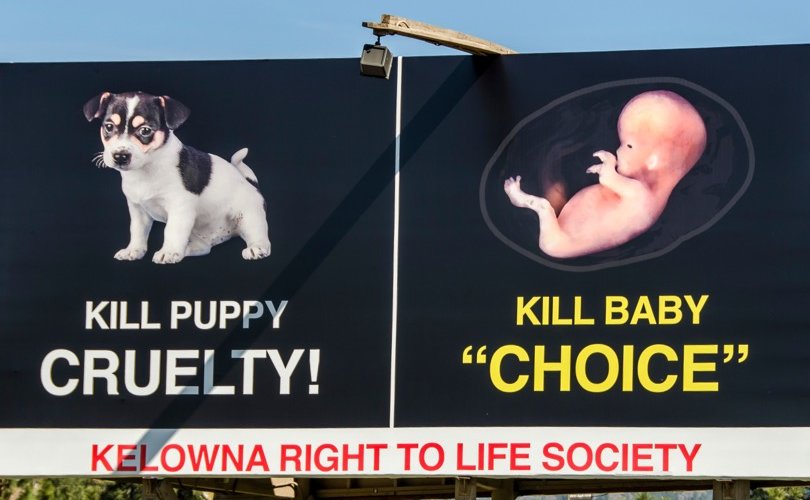 KELOWNA, B.C., June 13, 2016 (LifeSiteNews) — A massive pro-life billboard on the drive to Kelowna, British Columbia, will remain standing after the country’s advertising watchdog dropped complaints against it, deciding that it did not violate standards of decency and acceptability.

“When the local pro-aborts got together and put in a bunch of complaints with the Advertising Standards Council we replied to those complaints truthfully and honestly, and now they’ve dropped the case completely,” Kelowna Right to Life Society's Executive Director Marlon Bartram told LifeSiteNews.

The billboard, erected by Kelowna Right to Life Society earlier this year, depicts a cute puppy beside a fully-formed pre-born baby about 10-12 weeks gestation with the words, “Kill a puppy, Cruelty!” followed by “Kill a baby, ‘Choice.’”

Abortion advocates complained to local media as well as to the Advertising Standards Council (ASC) of Canada that the 10 by 20 foot billboard on Hwy. 97 in West Kelowna was “disturbing,” “inaccurate,” “offensive,” and “unacceptable.” They campaigned for its removal.

“I don’t believe this type of advertising belongs on the side of a highway or anywhere else for that matter. The whole thing is disturbing,” wrote Kelowna resident Yvonne Callihan in a May 3 letter to Capital News.

“The dog is alive and well, thank you. The fetus isn’t. It can’t function unaided. It isn’t breathing on its own. It is a fetus,” she wrote. “I would be very grateful if Right to Life, Kelowna, would remove this offensive garbage and find a more respectful and less intrusive way of expressing their views.”

Dianne Varga, also of Kelowna, wrote in the same paper May 9 that ASC should target the pro-life billboard since “it’s inaccurate to imply a fetus is ordinarily subjected to cruelty through abortion.”

“Abortion is about many things, but it is not about cavalier ‘cruelty’ and ‘killing,’” she wrote.

But former abortion doctor Anthony Levatino, who performed over 1,200 abortions, revealed in a series of videos this year the extent of the brutality that abortion inflicts on preborn babies at any stage of development.

STORY: He performed 1,200 abortions. In new viral video, he wants you to see what abortion really looks like

Kelowna Right to Life Society stated on its website that it erected the billboard with the goal of making people think about abortion in comparison to animal cruelty.

Bartram called the ASC's decision to drop the complaints a “major victory for the pro-life movement.”

“We see this as a major victory, not only in terms of respecting freedom of expression, but also for the march toward achieving protection for the unborn. The crux of our argument is that pre-born babies, like born babies, are full persons with the inherent right to life, and that abortion is an abhorrent violation of that right. This billboard has done wonders in helping us to advance these important truths.”

In a June 2 letter to the ASC, the pro-life society argued that complaints from abortion advocates amounted to complaints from competitors who were using the ASC to shutdown the message of a rival company.

“The handful of complaints received by your organization amounts to nothing more than an organized attempt by our competitors to use your mechanism to further their own agenda and influence public opinion toward their position,” the society stated in a June 2 letter. “We’ve noted that ASC ‘cannot process complaints from persons who are affiliated or associated in any way with a competitor of the advertiser,’” it added.

The pro-life society also defended itself against the charge that the word “baby” on the billboard to describe what was growing inside a mother’s womb amounted to a “false and misleading statement.” It pointed to numerous examples where the word “baby” is used to similar effect in other advertisements such as on liquor warnings, cigarette packaging, and Health Canada literature.

“The widespread use of the term ‘baby’ used by other advertisers, government agencies, medical websites, online and print pregnancy resources, and everyday public discourse makes its use by us in our media campaigns perfectly legitimate and accurate. We cannot be singled out just because our use of the word is in the context of abortion and some people may claim it is disturbing or offensive to them,” the society stated in it’s defense.

While the ASC has no authority over advertisers, an adverse ruling against a particular ad often has the effect of member organizations — such as billboard companies — removing the ad. Adverse rulings might also make it difficult for affected advertisers purchasing ad space in the future.

The ASC has in the past not been friendly in its decisions to the pro-life movement.

The billboard is expected to remain up until March 2017. The pro-life society is encouraging supporters to help with a donation (via www.prolifekelowna.com) to keep the billboard up even longer.