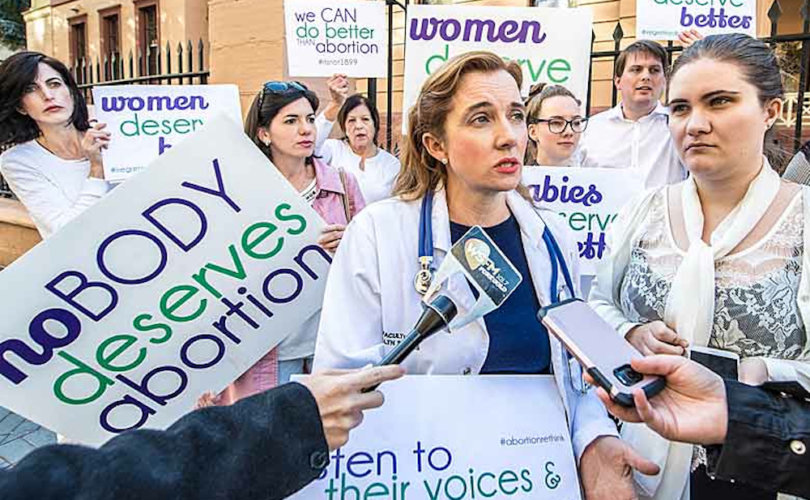 Protesters speak with the media outside parliament.Giovanni Portelli

SYDNEY, Australia, May 11, 2017 (LifeSiteNews) — New South Wales became the second state in Australia to defeat moves to decriminalize abortion thanks to a spectacular setback in parliament today of a bill that was roundly condemned as deeply flawed on many levels.

The Abortion Law Reform (Miscellaneous Acts Amendment) Bill 2016 was defeated 25 to 14 in a conscience vote to cries of “shame” from disappointed pro-abortion activists in the public gallery.

The bill was similar to the Pyne bills in Queensland in that it would totally remove abortion from the criminal code and also establish zones around abortion clinics whereby protesters would be prohibited from gathering. It had been in parliament for almost two years.

During debate, the first speaker, Hon. Trevor Khan, referenced and endorsed the concerns of the Queensland parliamentary committee that considered the Pyne bills. He noted from their report: “The committee considers that constructive law reform should start with thorough policy development. Legislation … should be the means to implement coherent policy rather than partially developed proposals. … The committee does not consider the introduction of a bill to be an appropriate catalyst for policy development and consultation which should appropriately be done before the introduction of a bill.”

Khan also questioned whether the bill was necessary or appropriate and stated that he had not heard any evidence that abortions were “performed in a dangerous or unsafe manner” or that women seeking abortions were being denied them. He disregarded claims that women in regional areas were suffering from a lack of access to abortions (which would allegedly be solved by decriminalization) because they also have difficulty accessing any other medical service and therefore abortion legality was not the issue.

He chided the author of the bill, Greens MP the Hon. Dr. Mehreen Faruqi, calling for “a discussion based upon an accurate understanding of history, the law and present day practices, not on myths and anecdotes.”

Sensing the magnitude of the blown opportunity, fellow pro-abortion MPs who wanted the bill to pass offered the most scathing responses.

The Hon. Walt Secord, Shadow Minister for Health, said, “My support is not due to the efforts, but despite the efforts of Dr. Mehreen Faruqi in bringing forward this legislation. I have to say I am profoundly disappointed by Dr. Mehreen Faruqi's approach. Because of her approach, this important bill, and the whole area of abortion law reform, is likely to fail.”

He further criticized her bill as flawed and introducing unintended consequences, claiming she had “been insensitive and irresponsible in bringing forward this partially developed bill.” He said her handling of the matter had “the sophistication of a student candidate fighting for a position on a university student representative council.”

Secord blamed the “almost careless and reckless” handling for the lack of legal framework within the bill for legally approved abortions which then resulted in opponents of the bill being able to mount very successful counterarguments.

He surmised that “Dr. Faruqi's bill is (all) about politics and her position within The Greens.” Secord reiterated his previous statements about Faruqi's actions to the Sydney Morning Herald and complained that “she has articulated her view only within the echo chamber of her own constituency.”

The Hon. Ernest Wong also cited concerns with how the bill was introduced and the approach to debate, supporting earlier remarks about a lack of consultation. “It is no way to build the case for change in an area of law that attracts diverse, contrary and deeply held views” he said.

The Hon. John Graham was slightly more charitable in stating that the bill “will represent a start to the debate because a reassertion by this House that abortion is a crime will come as a surprise to many citizens of New South Wales.”

As the final speaker before a division was called to vote, Faruqi claimed that the bill was not hers or a Greens bill but was “on behalf of the women of New South Wales, medical practitioners, lawyers and, most importantly, the community that overwhelmingly supports the decriminalization of abortion and the enactment of safe access zones outside clinics.”

Faruqi attacked claims that the bill allowed abortions up to the day of birth as being unfounded and a myth “peddled by the anti-choice lobby.” She stated that suggesting a woman would do this is “offensive and has no grounding in reality” and there is no evidence that this happens or that a doctor would do that.

She declared that her abortion decriminalization bill was not radical and attacked her fellow MPs who are pro-abortion but refused to vote for it. “They cannot claim to be pro-choice and then vote against a bill that is all about choice,” she said as she complained about them wanting to have it both ways.

Faruqi finished with the protest chant, “Not the church, not the state, women must decide their fate,” and commended her bill to the house as they moved on to the formal vote.

Despite the litany of concerns over the content of the bill and the handling of the process, it was still supported by the Royal Australian and New Zealand College of Obstetricians and Gynaecologists, the NSW Nurses and Midwives Association, Family Planning NSW, Marie Stopes, New South Wales Teachers Federation, Australian Lawyers for Human Rights, the National Tertiary Education Union; Family Planning NSW, and the White Ribbon anti-domestic violence campaign.