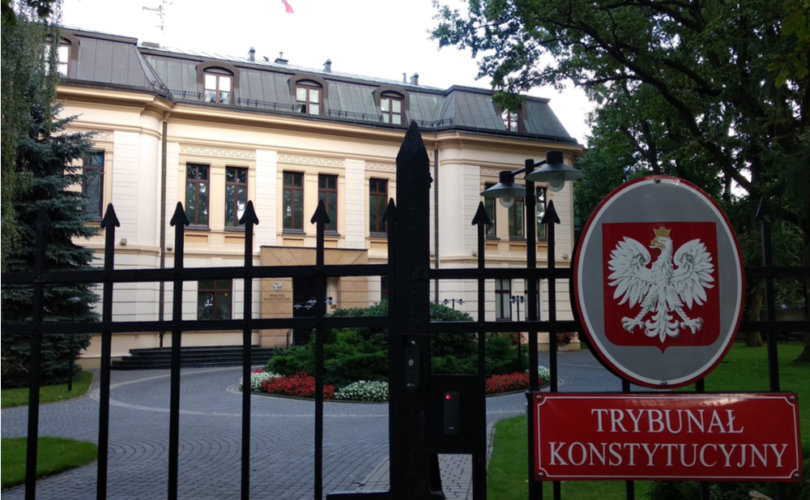 WARSAW, Poland, January 28, 2021 (LifeSiteNews) — Poland’s amended abortion law has now officially come into effect, protecting the right to life of babies with Down syndrome and those with serious disabilities.

Yesterday, Poland’s Constitutional Court published on its website its October 22 decision outlawing the practice of eugenic abortion. The order took effect at midnight. Hitherto, Poland’s laws permitted the abortion of unborn babies with “serious disabilities” and “incurable diseases.” After considering a petition by 119 members of the Polish parliament, coming from several different parties, the country’s highest court declared that the practice was unconstitutional.

Article 38 of the Polish Constitution states that “the Republic of Poland provides every human being with legal protection of life,” and Article 30 reads, “The inherent and inalienable dignity of man is the source of human and civil freedom and rights. It is inviolable and its respect and protection is the responsibility of public authorities.”

The Constitutional Court decision ended a truce between pro-life Poles and Poles who believe women have the right to abort their children: the so-called “abortion compromise.” According to this unspoken agreement, abortion in the majority-Catholic country was not totally banned, and at least one “citizen project,” or bill, to criminalize the killings completely failed to be passed into law. Today, abortion in Poland is still legal if the life or health of the mother is endangered by the unborn child or if the child has been conceived through a criminal act, such as rape.

There has not been universal rejoicing over either the decision in October or its publication yesterday. In October, Poland’s foreign-funded, pro-abortion movement led thousands of protestors into the streets and inspired them to desecrate Catholic churches. Last night, pro-abortion demonstrators came out again, albeit in much smaller numbers.

According to Polonia Christiana, last night’s demonstrators damaged and stole property, blocked traffic, shouted profanities, called for violence and even committed violence. Most notably, a gang of protesters attacked Media Narodowe’s (National Media’s) Agnieszka Jarczyk, hitting her, throwing her microphone to the ground, and screaming a profanity — the pro-abortion movement’s obscene slogan — into her earpiece through a megaphone. Jarczyk was taken to a hospital.

Kaja Godek of Poland’s Life and Family Foundation, one of the nation’s best-known pro-life leaders, told LifeSiteNews that she and her colleagues in Poland are very happy and that they are not concerned about pro-abortion pushback in future elections.

“The radical left is always eager to bring back abortion on demand,” Godek told LifeSiteNews by email. “They will be always trying to do this, irrespective of what we pro-lifers do or don’t do.”

“After the publication of the verdict, the Left will have to start from a worse point than before, so what happened yesterday is an improvement of the situation, also in political terms. Of course, feminists are going to express their anger, but this is what always happens when life wins. We should not be scared.”

Godek stated that the “wave” of pro-abortion violence is “much weaker” than it was in October, although she conceded that they had physically attacked “a journalist on duty, even though she was only doing her job.”

“(Jarczyk) is being examined in hospital for partial hearing loss,” she added.

Nevertheless, Godek is hopeful that the publication of the bill will end the “vulgar marches”: “Feminists will finally see they have nothing to win.”

Godek is the married mother of a son with Down syndrome and two daughters. When she was pregnant with her son, she was offered an abortion by a Warsaw hospital on eugenic grounds.

In an interview with Polonia Christiana, Jarczyk said that demonstrators began to attack her after the de facto leader of the pro-abortion movement, Marta Lempart, told the crowd that they were being recorded by “provocateurs and fascists” and dissuaded them from speaking to the cameras.

“The moment Ms. Lempart finished calling us provocateurs and fascists, two men came up to us and began to push us around and do everything they could to interrupt our report: they covered up the camera lens, and they tried to take the microphone away from me,” Jarczyk said.

Afterward, the Media Narodowe crew stood to the side so they could film the protest “calmly,” but when they joined the marching crowd, they were attacked again.

“I wanted to ask another person why he had taken part in the demonstration, but a woman appeared and, taking a megaphone, began to scream the vulgar word that is the guiding slogan of the protests organized by the Misses Lempart and (Klementyna) Suchanow right in my ear,” the journalist continued. “I was stunned. I have a hearing device in my right ear, so that worsened the pain.”

As Jarczyk’s cameraman tried to push away the megaphone, a man then tore the microphone away from the journalist and threw it on the ground. When she told him he’d have to pay for any damage, the response was more obscenities, pushing and blows for both her and her colleague. Then protestors added theft to their list of offenses.

“At one moment they stole our … equipment,” Jarczyk said. “It happened so fast, I was so stunned, that I couldn’t register when and how everything happened. The cameraman ran after the man who stole our equipment, the crowd applauded him and called us names. Me, I just tried to get out of there so that nobody would hurt me again, because they were very aggressive to us.”

The cameraman was unable to get the equipment back. Instead, he and Jarczyk made a police report and then went to the hospital.