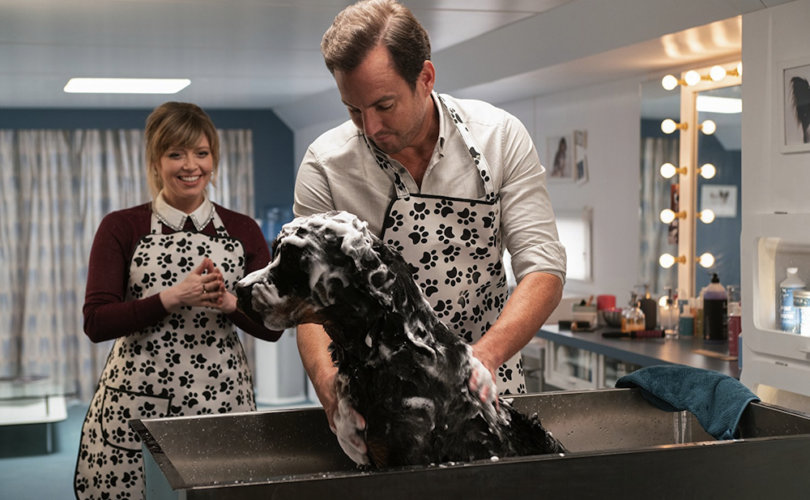 LOS ANGELES, May 24, 2018 (LifeSiteNews) – In a stunning victory for families, the producers of a controversial kids’ movie that critics says grooms kids for sexual abuse are yanking it from cinemas worldwide.

Scenes from the live-action “talking dog” comedy Show Dogs will be cut before the film returns to theaters.

Pro-family groups, including LifeSiteNews and the National Center on Sexual Exploitation (NCOSE), criticized Show Dogs for scenes conveying a message that unwanted genital touching must be endured. After a torrent of protest from parents and the censure of even such left-wing media as Slate, the movie’s producer released a statement promising to remove two of the objectionable scenes.

“Responding to concerns raised by moviegovers and some specific organizations, Global Road Entertainment has decided to remove two scenes from the film Show Dogs that some have deemed not appropriate for children,” the studio said. “The company takes these matters very seriously and remains committed to providing quality entertainment for the intended audiences based on the film’s rating.”

Global Road Entertainment also offered an apology to anyone who “feels the original version of Show Dogs sent an inappropriate message.”

In the version released in the USA on May 18, a talking dog named Max and his human partner, an FBI agent, go undercover at a prestigious dog show to rescue exotic animals from smugglers. As part of his training, Max is told, he must get used to having his genitals touched, as they will be examined by a judge. Max’s reluctance becomes a major plot point because any resistance to the judge’s inspection will endanger his status as a competitor. Max is advised by another dog, a former champion, to travel in his mind to a “zen place” when his genitals are fondled. When the uncomfortable inspection occurs, Max does indeed go to his “zen place”, where he enjoys a happy mystical vision.

NCOSE stated on Tuesday that Show Dogs normalized “unwanted genital touching to its child audience” and sent a “troubling message that grooms children for sexual abuse.”

Its executive director, Karen Hawkins indicated that the implied reward for enduring the unwanted touching and the advice to retreat to a “zen place” were similar to tactics used by child molesters.

“Disturbingly, these are similar tactics child abusers use when grooming children—telling them to pretend they are somewhere else and that they will get a reward for withstanding their discomfort,” she said. “Children’s movies must be held to a higher standard, and must teach children bodily autonomy, the ability to say ‘no’ and safety, not confusing messages endorsing unwanted genital touching.”

Today Hawkins was jubilant that a grassroots backlash had led to the harmful content being cut.

“Over 1,000 people sent emails to top theaters in the US and the film's producer through our system in just 24 hours,” she wrote to NCOSE’s supporters. “I was going to email you tomorrow asking you to help us, but the social media storm was enough!”

“…Moms, dads, and good people everywhere can make a huge difference for good when they speak up! Blogs, tweets, statements to the press, emails to the corporate leaders – wow!  We did it! Thank you to those who joined us online these last 48 hours.”

The film’s script-writer, Max Botkin, distanced himself from scenes he says he didn’t write. He told CNN that he had no hand in revising the script, and that twelve uncredited writers had helped produce the final draft.

“I absolutely condemn any suggestion or act of non-consensual touching in any form, as well as disassociation as a coping mechanism for abuse of any kind,” Botkin said in a statement. “I understand and emphasize with the parents’ and groups’ concerns regarding the message the movie may impart.”

Despite the cuts, the film may still not be appropriate for families. Critics have panned Show Dogs for its reliance on jokes about genitals and bodily functions. The trailer itself contains a scene in which Max’s human partner vengefully applies a “bikini wax” to Max’s hindquarters and Max screams in pain. To comfort him, the former champion show dog says that when the pain passes, the “beauty” will remain.