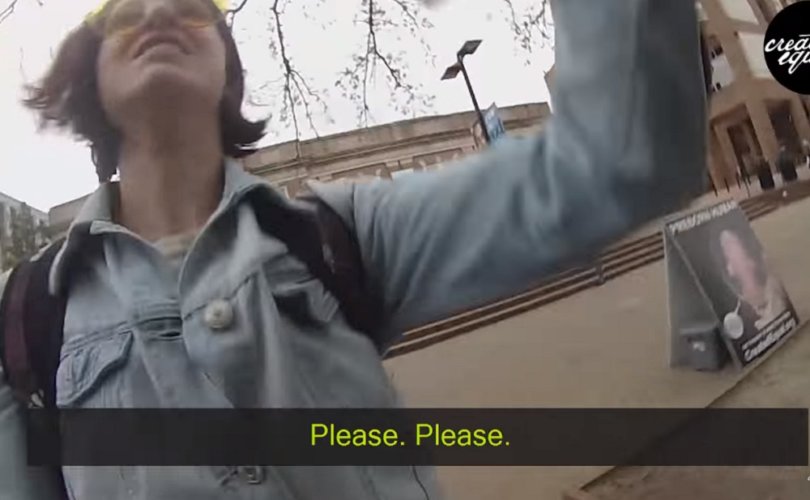 May 9, 2019 (Created Equal) — A pro-abortion activist assaulted one of Created Equal's team members in a shocking new video. Created Equal was conducting a campus tour traveling to 14 college campuses in 3 states to display large signs depicting the gruesome reality of abortion and to engage students in conversation about this human injustice.

Our traveling team was attacked during its visit to University of North Carolina at Chapel Hill on April 2nd, 2019. Footage of the outburst begins with a woman asking our team, “Did you put these [signs] up?” When they respond affirmatively, she proceeds to repeatedly punch and kick a member of our staff. Watch the attack and hear from law enforcement that the student is being charged with assault the video below.

For years, we have documented incidents of violence against young members of our team. Here is a brief sampling:

For abortion activists to promote dismembering young humans through abortion is to celebrate violence. Thus, violence is inherent to abortion advocacy. We thus should not be surprised when those who champion killing babies also assault those who stand between them and the victims.

We are pleased to see that we still have the rule of law in America. As can be seen in the video, law enforcement provides an education on civics many of today's students have failed to receive.

Next week we are releasing another video showing just how shocked another UNC student is when she is arrested for committing larceny!

Dr. King said, “Hate begets hate; violence begets violence; toughness begets a greater toughness. We must meet the forces of hate with the power of love … The ultimate weakness of violence is that it is a descending spiral begetting the very thing it seeks to destroy; instead of diminishing evil, it multiplies it.”

Created Equal is a national anti-abortion organization that focuses on training students to be pre-born defenders by using a traveling photo exhibit to show as many students as possible what abortion does to preborn children. Placing abortion in the broader context of human equality, the project attempts to create debate on campus to influence America's future decision-makers and leaders.

Published with permission from Created Equal.