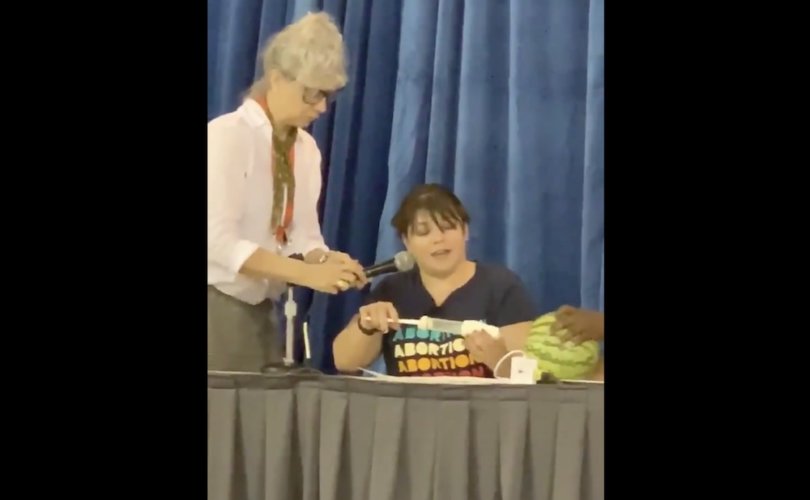 PHILADELPHIA, July 15, 2019 (LifeSiteNews) – This year’s Netroots Nation conference, an annual gathering of progressive activists, featured a pro-abortion panel that purported to demonstrate an early-term abortion onstage using a watermelon, for the purposes of arguing that non-physicians should be allowed to perform them.

During the talk, abortion facility consultant Jen Moore Conrow used a cannula and manual vacuum aspirator to extract the core from a watermelon, with the core representing an eight-week-old baby and the watermelon representing a uterus.

“Thank you for watching our abortion.”

A panel moderated by @lizzwinstead at Netroots Nation demonstrates terminating an early pregnancy with a watermelon. pic.twitter.com/bI3I3itUG7

“That’s the whole shebang,” Conrow said. “Most procedures take about three to five minutes, and folks feel okay afterward.” Another panelist said the demonstration shows that abortion is “not surgery” but is “easy to do,” and therefore advanced-practice clinicians, nurse practitioners, and physicians’ assistants should be allowed to commit them in addition to OB/GYNs.

“Thank you for watching our abortion,” Conrow said at the end of the clip, to laughter from at least one voice in the audience.

Pro-lifers argue that letting non-doctors commit abortions puts abortion-seeking women in greater danger by subjecting them to abortionists with less training or experience. Infamous Philadelphia abortionist Kermit Gosnell delegated parts of the abortion process, such as administering anesthesia, to non-physician employees, one of whom was only 15 years old.

“This has everything to do with control and power over people,” she claimed, “and it is absolutely rooted and based from a white supremacist mentality that is really all about remaining in positions of power and authority.” In May, U.S. Supreme Court Justice Clarence Thomas argued that it is the abortion industry, not its critics, that owes its origins to racism, citing Planned Parenthood founder Margaret Sanger’s involvement in the eugenics movement.

The Netroots Nation conference is no fringe gathering; CNN reports that this year saw the attendance of four primary candidates for the Democrat presidential nomination: Sens. Elizabeth Warren and Kirsten Gillibrand, former Housing and Urban Development Secretary Julián Castro, and Washington Gov. Jay Inslee. Every Democrat primary contender is running as 100 percent pro-abortion, and many have endorsed plans to codify Roe v. Wade in federal law and forbid states from passing their own pro-life laws.