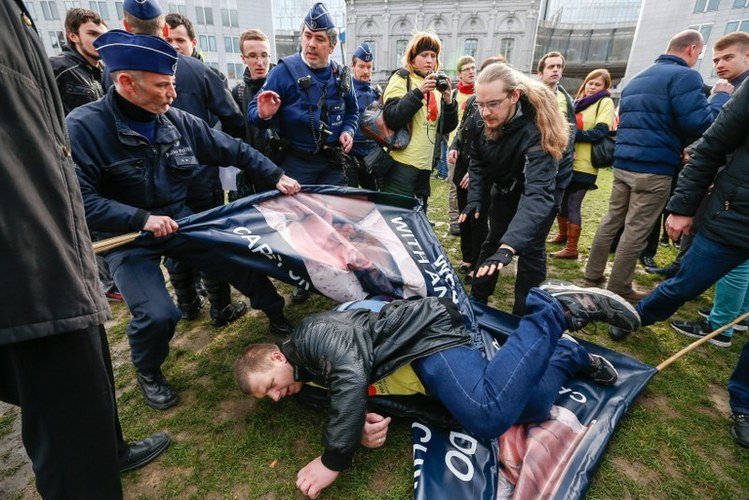 BRUSSELS, March 31, 2015 (LifeSiteNews.com) — Belgian police used force against pro-lifers holding a legal, peaceful picket Monday in the center of Brussels, near the European Parliament buildings.  The pro-life rally, led by activists from Poland, was surrounded by an angry mob of abortion supporters, but when the police intervened they forcibly removed the pro-life signs, and even a Polish flag, saying they were provoking aggression.

The pro-life rally, which displayed graphic abortion signs, was legally registered, and organized by Fundacja Pro, a very active pro-life group from Poland, along with Michał Marusik, a Polish Member of European Parliament, and the Instigos Institute.

Kaja Godek, one of Poland’s leading pro-life activists, described the scene at the Luxembourg Square in Brussels for LifeSiteNews:

When we display graphic abortion pictures on the streets of Poland, the reaction we get is mostly sympathetic. In Brussels, we met with aggression and a hysterical reaction. Some furious people surrounded us screaming that we were sick and that the photographs of abortion victims were a lie.

Jacek Januszewski, one of the youth participants, told LifeSiteNews, “They screamed vulgarities and obscene insults, specifically directed at the ladies in our group. They threw firecrackers, physically pushed us, and tried to steal our banners.”

Describing the actions of the police, Januszewski said, “They formed a circle around our group, but were facing us, as if we were the source of aggression, not the mob around us.” He continued, “Even after one of the policemen got hit on the back with something thrown at us by the mob, they still acted as if it was us who caused the danger. We were just standing there in shock.”

“At one point a man dressed in civilian clothes approached us all red in the face, pushed us and tried to take our banners by force,” said Januszewski. “When we resisted, he produced a police ID. We asked him what he was doing and what law allowed him to disrupt a legal demonstration like that. He screamed back at us: ‘I am the law in Brussels.’”

Godek commented on the undercover officer too. “The man in civilian clothes kept pointing to one specific banner we were holding, showing the face of Adolf Hitler with a caption ‘Hitler legalized abortion on demand for Poles.’ [The undercover policeman] was all red in the face and kept saying he didn't like it and that it was upsetting everybody. We told him we were being attacked and needed protection. He said that we were the danger, we were provoking violence.”

Watch videos (exchanges between police and protesters are audible and in English):