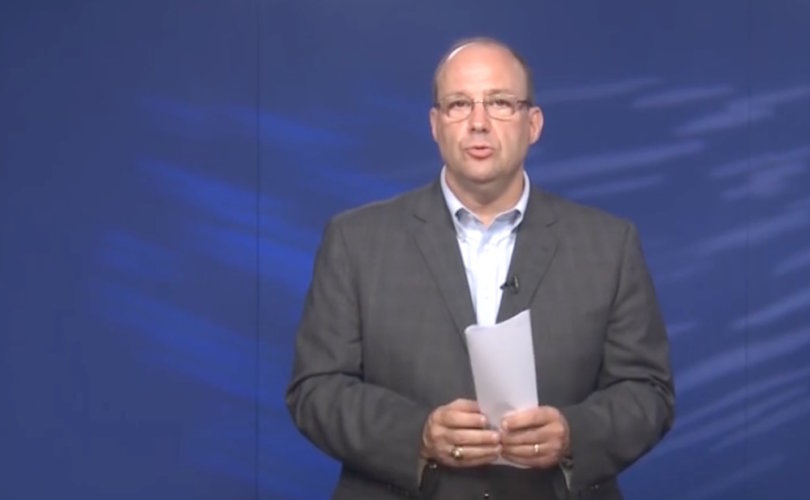 ANNAPOLIS, MD, August 25, 2016 (LifeSiteNews) – A Maryland school district will allow members of one biological sex to sleep in the bedrooms of the opposite sex during school activities – and parents will not be informed in advance.

So, many of you might be asking yourselves, ‘So I’m at an overnight field trip, and I have student who’s biologically a male, identifies as a female, and we’ve worked with that student and [his] family, and that student wants to sleep in the dorms, or whatever sleeping arrangements are, with the females. They don’t want to sleep in a room by themselves; they want to sleep with the rest of the females. So what do we do?

And the answer is, they sleep with the females. That’s not the easy answer; it’s the right answer. And in some cases, it’s going to cause issues, because … the private information piece doesn’t allow you to share that with parents of all of the other campers. Right? So, that’s difficult.

Mosier later reiterated to Fox 5 D.C. that the school’s policy is that the only people informed about a male spending the night in a female’s room are those “in the immediate need-to-know circle, and we work with the student and the student’s family to determine that.”

The policy applies, not just to overnight trips, but to prolonged stays away from home. “It applies at summer camps,” says Laurie Pritchard, director of legal services for the school district.

The policy adopted by the school district, one of the nation’s 50 largest with more than 80,000 students, was drawn up prior to President Obama’s controversial federal guidance to public schools on transgender issues.

Concerned parents – and students – have said that this policy could open the door to sexual abuse or peeping, and at least one prominent commentator has said it should trigger an “exodus from public schooling.”

Lucia Martin, coordinator of school counseling, told participants in the June training that, “of all the things that worried that students that I talked to” at a previous meeting “that was the one they were most worried about. I just said, ‘Can you imagine some teenage boy,” she asked, “subjecting himself to the ridicule of his friends just to be able to go in the girls locker room?’”

“Same thing with field trips,” she said at another point in the video.

An unidentified female participant responded, “I don’t know. They could think it’s a really cool trick.”

“You may be right,” Martin replied.

“I have a teenager – not that he would do that,” the participant added.

An elementary school teacher pushed back on the notion that no one would abuse the new guidelines. Pritchard responded the district would handle the issue “on a case-by-case basis.”

If a boy says he identifies as a girl, then “we see him making out with his girlfriend, and we know that’s been his girlfriend…then administrators are gonna consult with legal, with counsel, and then we’re gonna deal with those those kids and have a discussion with those students and parents.”

Mosier said that transgender identity asserts itself by “three characteristics: insistently, consistently, and persistently. So, when Johnny comes to school on a Thursday and wants to be a girl on a Friday, that’s a different issue.”

However, the Obama administration’s controversial federal guidance on transgender issues states that the moment the student informs school officials that he “will assert a gender identity that differs from previous representations or records, the school will begin treating the student consistent with the student’s gender identity,” including in the area of “housing.”

The Obama administration also enforces a ban on discrimination against people on the basis of sexual orientation – which is also not written into federal civil rights laws. Many biological males who identify as women remain attracted to women, such as Sean Patrick Smith, a transgender man arrested for filming women inside Target’s unisex changing rooms.

Someday “everybody can just use whatever they want to”

“I wouldn’t be a bit surprised if just a few years down the road, questions about restrooms and locker rooms will be gone, because we will have structured things so that everybody can just use whatever they want to,” she added.

“The whole thing is very instructive, though not necessarily in the way the school system intends,” Rod Dreher blogged at The American Conservative. “If you listen to the three women from the system who assist Mosier, they’re talking about things that are really crazy in a normal tone of voice, as if anyone who disagrees is the true nutcase bigot.”

Already, local media reported that numerous parents had objected to the policy, none of them quoted by name.

In a video presentation shown to educators, the mother of a transgender student remembers children in her son’s kindergarten class being supportive when she sent him to school dressed as a girl.

“But then the kids went home and told their parents, and they weren’t so great after that,” the mother said. “Adult bigotry had influenced them.”

“Our kids get it. The adults on the outside sometimes don’t get it, but the kids get it,” Mosier said, adding that there would be no exceptions to the policy.

Brian Griffiths the co-host of Red Maryland Radio, wrote, “This is a good time to point out that students in Anne Arundel County are believed to not be mature enough to consume a cough drop without going to the nurse’s office and having written permission from a parent, but the student is believed by the school system to make a mature and informed decision that they identify as a different gender.”

At least one parent told local media that not appearing judgmental was more important than safeguarding young women from potential sexual assault. ” I have heard people say it opens up pedophile possibilities, but honestly I think there is good and bad in everything in this world and I don't believe that we need to judge,” she said.

Time for a public school exodus?

Dreher said this policy is proof that people of faith nationwide should exit the public school system as quickly as possible.

“If you’re a teacher, administrator, or staffer for a public school system anywhere in the United States, you are going to find yourself sitting in a seminar just like this one day, if you haven’t already,” he wrote.

He warned against leaving Christian students in the public schools to evangelize others. “The culture is going to transform their kids,” he wrote.

“Your public school district may not be part of this movement yet. But do not be fooled: it’s coming,” he concluded.