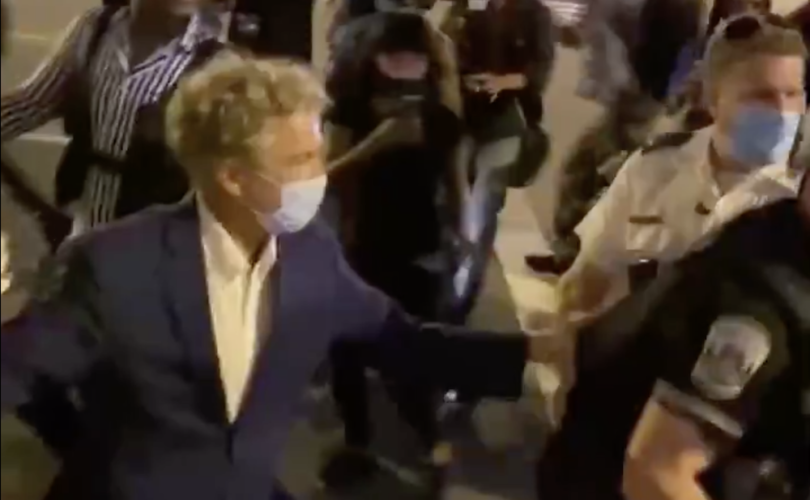 WASHINGTON, D.C., August 28, 2020 (LifeSiteNews) – Republican Sen. Rand Paul of Kentucky found himself the target of left-wing violence yet again Thursday night as protesters swarmed him as he was leaving the White House, chasing him and his wife Kelley back to their hotel.

Paul was departing the White House after President Donald Trump addressed the final night of the Republican National Convention. Multiple videos depict a crowd of screaming protesters surrounding him and his police escort as he walked the streets of the nation’s capital. At one point, an officer holding a bike can be seen knocked back by protesters who had been pushing against him. The Pauls were unharmed, and credit the police with “literally saving our lives”:

Just got attacked by an angry mob of over 100, one block away from the White House. Thank you to @DCPoliceDept for literally saving our lives from a crazed mob.

WATCH: Protesters confronted Kentucky Senator Rand Paul after attending the RNC at the White House, shouting at the lawmaker to acknowledge the shooting of Breonna Taylor https://t.co/JmxvZJy29u pic.twitter.com/tTONwewPcR

Paul elaborated on his experience the next morning in an interview with Fox & Friends.

Their hotel was actually just across the street from the White House, but he explained that the area was already filled with protesters, so Secret Service had directed them to take a bus to the D.C. Trump Hotel, from which they could take an Uber back to their own hotel. Once there, however, they were stymied by blocked streets.

“I regret that I made this decision but I said we’re going to walk the two blocks,” Paul said. “We walked one block, but as we walked one block, we could see some police in the distance, but we also saw a mob of about 30 people marching and yelling.”

“As they came closer they were shouting my name and the crowd doubled to 60, and then it doubled again to 120, and as they were surrounding us and it got closer and closer and everybody kept pushing back, the policemen were forming a barricade with their bodies, I whispered to the policeman, ‘They know who, I am you’ve got to get reinforcements, it’s going to get worse,’” the senator recounted. “He called for reinforcements but we didn’t get any reinforcements, we waited, but the crowd was getting bigger and bigger and pushing in.”

Eventually Paul and his entourage decided to move, and the mob followed. “So at one point they push a policeman backwards, he stumbles, and he’s trying to catch his balance and I catch the back of his flak jacket to stabilize him to make sure he’s okay because he’s our defense,” he said. “If he’s down, the mob is loose on us, and you’ve seen the pictures of what they do to you.”

Paul noted the irony of protestors shouting “say her name!” (amid shouts of “kill you” and the like), a reference to Breonna Taylor, the Louisville woman shot and killed in March by police executing a search warrant. The police returned fire after Taylor’s boyfriend shot first, but the incident called attention to the potential dangers of “no-knock warrants,” under which police can enter a home without announcing themselves to residents first.

“I’m actually the author of the Breonna Taylor Law to end no-knock raids so the irony is lost on these idiots,” Paul said. “That they are trying to kill the person actually trying to get rid of no-knock raids, and they were shouting and screaming and just — really these people were unhinged.”

Paul also reiterated his appreciation for law enforcement, noting that the incident highlighted the dangers of Democrat calls to defund the police.

“If America becomes Portland, what’s going to happen is people are going to be pummeled and kicked in the head and left senseless on the curb,” he warned. “That would have happened to us, I promise you, had we not had the D.C. police to support us.”

Students for Life of America president Kristan Hawkins was also at the White House last night and said upon leaving she was “‘greeted’ by a line of policemen in body armor, wielding shields, holding protesters at bay.”

“As BLM protesters yelled racial slurs at my black friend, we walked with Coach [Lou] Holtz until he was reunited with his driver,” Hawkins wrote in a blog post. “And then we began a 5-block journey in the streets of the capital after midnight by ourselves. As someone who protests for a living (actually peacefully), I wasn’t terrified. But I’m pretty sure most everyone else was. I was definitely on high alert.”

“We were walking as fast as we could, looking for police officers who we knew we could run to for assistance, if needed. That’s when I saw all the businesses in our capital. Windows boarded up, bars and restaurants silent, protestors in black, smoking weed and screaming. It looked like I had been dropped into a city in the middle of a revolution,” she reflected.

Paul is no stranger to left-wing threats of violence. In 2018, a former staffer to Democrat Rep. Sheila Jackson Lee was arrested and charged for posting the home addresses and personal phone numbers of Paul and other GOP senators online. That year, Paul was also one of multiple GOP lawmakers chased and screamed at by anti-Kavanaugh protesters at Reagan National Airport; and a man was arrested for threatening to kill Paul’s family with an ax. (Though not politically motivated, Paul was also assaulted by a disgruntled neighbor the year before, leaving him with lung damage that lasted well into 2019.)