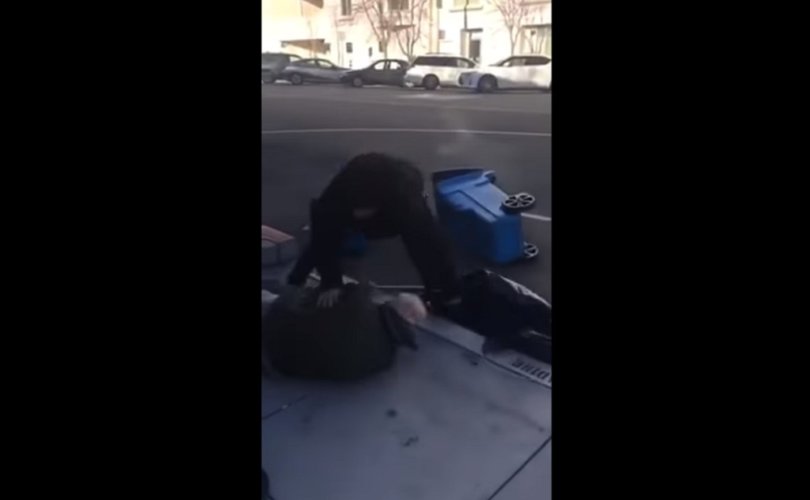 March 27, 2019 (Life Legal Defense Foundation) — An 85-year-old pro-life advocate was brutally assaulted outside a Planned Parenthood facility in San Francisco last Thursday. The pro-lifer was taking part in a peaceful 40 Days for Life campaign when the perpetrator stole the victim’s banner and viciously beat him. The same assailant had attacked the victim and another man just two days prior.

The elderly man tried to stop the theft of the banner by putting the stick holding the banner into the spokes of the bicycle. The perpetrator shoved the man to the ground and began violently and repeatedly kicking and threatening him.

CAUTION: The video is unedited and depicts a violent assault. Note that the elderly man’s act of putting the stick in the spokes of the bicycle is lawful, as a reasonable use of force to prevent a robbery is permissible.

Just two days earlier, the same perpetrator threw a sign, table and pro-life literature into the street. He knocked two men to the ground during that incident as well, including the same elderly pro-lifer he attacked again on Thursday.

The attacks were reported to law enforcement, but it is not clear whether a formal investigation has been launched. Pro-lifers have not seen any additional law enforcement presence around the Planned Parenthood location since the initial attack.

It has been reported that Planned Parenthood has video surveillance of the attack area, but it is unwilling to release the footage.

We have seen an increase in violent assaults during peaceful pro-life vigils at Planned Parenthood and other abortion facilities across the nation.

Life Legal represents the elderly victim, who is afraid for his safety. We are working closely with 40 Days for Life to make sure pro-life advocates in San Francisco and across the nation are protected and perpetrators are brought to justice.